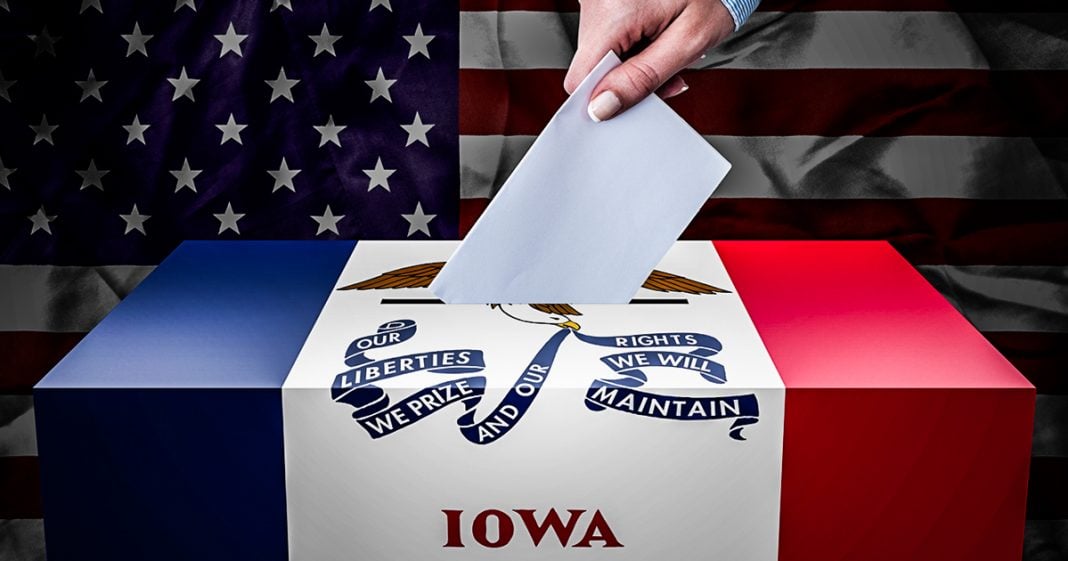 Iowa has a long-standing tradition of being the first state to hold a primary or caucus, followed closely by New Hampshire. These are terrible choices on where to start. Ring of Fire’s Farron Cousins explains why these two states, and Iowa especially, are not even close to being representative of the United States as a whole, and why candidates would benefit greatly from spending time in states that look more like the rest of the country.

Well folks, we are now just really a matter of days away from the Iowa caucus. And I can’t tell you how excited I am to not have to pretend that Iowa is important for at least another four years. And here’s why I say that, Iowa, the first State to have their caucus is not representative of the rest of the country. I have been saying this for months and it’s something that at this point is actually making me very angry because I am sick and tired of hearing about Iowa. Iowa, 90% white, Iowa, whereas the rest of the country is only about 60% white. But let’s focus all our time and money and months and months and months of effort and energy on this State that is not representative of the majority of this country. It is not holding on to a plethora of electoral college votes that’s going to help candidates if they spend five months there.

Electorally speaking, and I don’t mean any offense to Iowa here, but electorally speaking, Iowa doesn’t really matter and neither does New Hampshire, which comes second after Iowa. And yet as a recent column by David Leonhardt in the New York Times pointed out, the reason we go with Iowa first is because way, way, way back in the day, decades and decades upon decades ago, Iowa had a very lengthy process on how they awarded their States delegates. So they had the vote first because it took them so long to figure out and I guess do the math, that they had to do it first so they could get it done by the time it was convention time, that’s how long it took. New Hampshire didn’t have much money, as Leonhardt points out. So New Hampshire went second because they did it on a day when there were lots of town meetings and everybody was there and everybody could go ahead and just vote and get it over with. So we just did it all in one day. Times have changed, those are no longer the facts. Yet, we’re still stuck with Iowa where candidates do go spend four or five months there, only leaving to occasionally go over to New Hampshire and every once in a while traveling down to South Carolina for a day or two and then they had right back to Iowa.

That’s insane. You know, on January 6th of this year, I tweeted out a thread explaining why really anywhere, but Iowa would be better, but I used my home state of Florida as a great example. Florida is a swing state. Florida is a swing state that has 29 electoral college votes. That’s a lot. It’s fourth most in the country, right? Something worth fighting over, to be honest. Imagine what would happen if instead of spending four months in Iowa and spending millions of dollars in Iowa, all that time and money was spent down here in the state of Florida.

You know, Joe Biden and Elizabeth Warren and Bernie Sanders, and Buttigieg, all of them just making their way all throughout this state, talking to voters who they wouldn’t otherwise talk to because they wouldn’t have the time. You would change a lot of minds. You would experience a lot of new things and maybe change your policies because of that. If you don’t want to do Florida, fine. How about Georgia? Georgia is on the verge of flipping too. That would be a great state to go spend four months in for these Democratic candidates, North Carolina, South Carolina, any of those places. Texas at this point would be worth it to spend a few months and millions of dollars in, instead of Iowa. Going to Iowa first is stupid. It’s a waste of time. It’s a waste of energy and it’s a waste of money, and it is an insult to the swing voters who are on the fence. But now, because of all the time wasted in Iowa and New Hampshire, will probably never get the opportunity to see a presidential candidate come to their city. That’s disappointing and could cost the candidate in the general election.