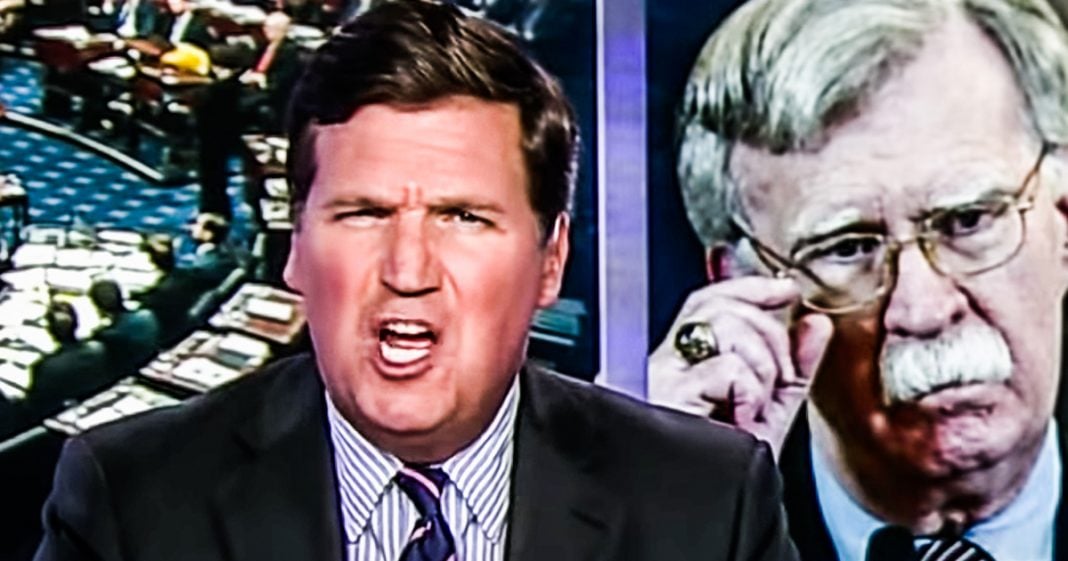 Fox News hosts have had a VERY hard time trying to run cover for the President after John Bolton’s claims of extortion, and they spent the week trying to make sense of it all. Tucker Carlson, Sean Hannity, Laura Ingraham, and many others on the network tried to downplay Bolton’s claims, going as far as calling him a “tool of the left.” Ring of Fire’s Farron Cousins discusses the collective meltdown at Fox News.

With the revelations from John Bolton earlier this week that yes, Donald Trump did order the aid to Ukraine suspended until they announced an investigation into the Biden family, Fox news, ever since that came out has kind of gone a little bit insane. Which is saying a lot, because that network is always a little bit insane, but they truly, and completely lost it this week because they had no idea one, that these revelations were coming, two, that they were coming from a guy that they love, John Bolton. A guy who for 11 years, by the way, was a paid contributor to Fox news and three, they had no idea how to defend it. So in true Fox news fashion over the week, we have seen some of their biggest heavy hitters, Tucker Carlson, Laura Ingraham, Sean Hannity, Lou Dobbs, and so many others try to go out there and do their best with what they’ve got.

Trying to downplay Bolton’s revelations. So here is, I guess, a bit of a greatest hits of what we heard out of Fox news this week. Let’s start with Lou Dobbs, excuse me, who claimed that John Bolton has been reduced to a tool for the radical Dems and the deep state. You know, if a deep state did in fact exist, I wouldn’t be surprised to find out John Bolton was a part of it. Right? That’s his thing. Intelligence, endless war, all that crap. The things the deep state does. A tool for the Democrats though, no, no thank you. That is a tool we do not want to use. We’d love to hear his testimony. Get him on the record then after that, never think about him ever again for the rest of our lives. Thank you very much.

Tucker Carlson had this to say. Bolton has always been a snake. Sneaky little snake, isn’t he, Tucker? John Bolton, the snake. Now listen, I don’t disagree with you on that really, bud, to be honest with you. Bolton has tried to lie us into multiple different wars through multiple different administrations. He worked with Reagan in the Reagan administration, Bush sr, Bush jr, Trump. This guy has been embedded in Republican politics and all of the worst policies we have seen for decades. So he is a snake, just not for the reasons that you think he’s a snake. Sean Hannity on his radio show had this to say, now they’re acting like this is a big bombshell, Bolton’s book. Okay. The problem is it’s a New York Times story. How often did this New York Times get things wrong? So it’s, it’s wrong just because the New York Times were the ones who reported it? It’s in the book, right?

It’s in Bolton’s manuscript, but according to Hannity, because the New York Times were the ones who first reported it, totally can’t believe it. They’ve gotten a couple things wrong. Yeah, Hannity, how many things have you gotten wrong? Right? Let’s put your record up against that of the New York Times. I know the New York Times is pretty crappy most of the time, but you’re pretty crappy all of the time and I’m going to go with only most of the time versus all of the time, in this particular instance. Then of course you had Laura Ingraham who simply said that Bolton’s book is a red herring. Not, not exactly sure how, how the book itself is a red herring. But that’s interesting. I mean, look, Laura Ingraham, nobody’s ever accused her of being super intelligent, right? So nonetheless, that’s just a few choice responses from the folks at Fox news. You also had Dan Bongino, who, if I could pull up his tweet, but I can’t because I’m blocked, did go on Twitter and talk about how much of a nonsensical thing this is and how it doesn’t matter. It’s not a big deal. Nobody cares about Bolton anyway, but they do. We’re going to see a pretty significant shift, I think, in public opinion as this story continues to grow. And if Republicans refuse to allow Bolton to go and testify as a witness, then yeah, suddenly Bolton’s story is going to get even more legs than the Republicans and the good folks at Fox news wanted it to.