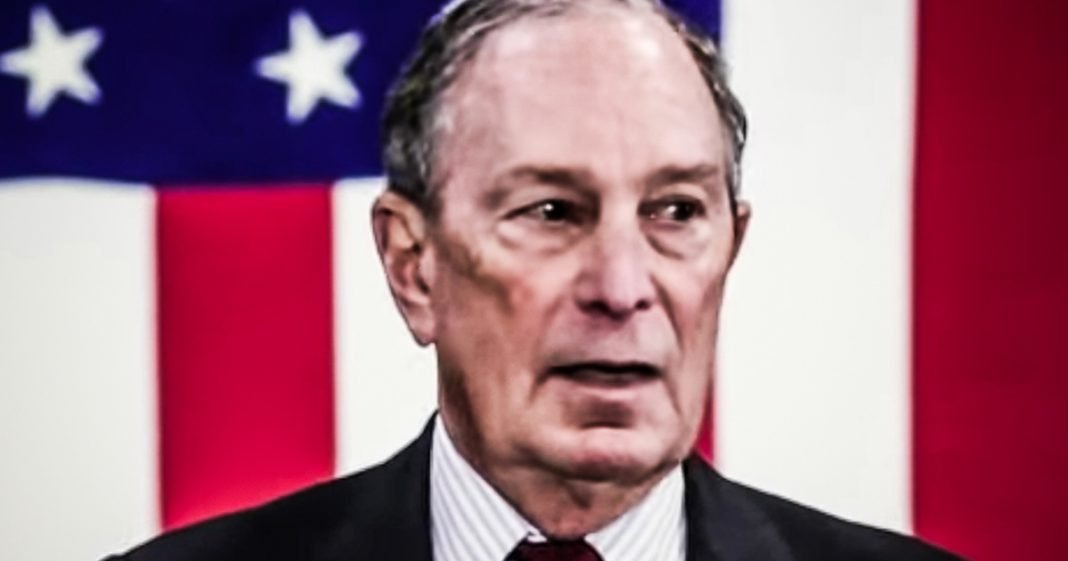 Mike Bloomberg has officially bought his way onto the debate stage for the next Democratic debate, as the DNC has decided to change the rules in order to get him on the stage. This is a disgusting move by the Party, and it shows that they have learned absolutely nothing from 2016, and all they care about is hurting the progressive candidate that happens to be surging right now. Ring of Fire’s Farron Cousins explains what’s happening.

On Friday, the Democratic National Committee decided that they didn’t care about the rules that they had put in place themselves for the 2020 primary election and debates and they decided they were going to scrap those rules so that billionaire Mike Bloomberg could actually make it onto the next debate stage. That’s very nice of them, right? You know, looking out for old Mike. Well, as it turns out, shortly before, in fact, two days before Mike Bloomberg decided to file the paperwork to officially run as a Democrat for president, he gave the DNC a little over $300,000. In fact, he gave them $318,000, and he also gave roughly $800,000 to the Democratic grassroots victory fund, which is a PAC of the DNC. So gave them over $1 million total, through a couple million more dollars at State races for the DNC. And so now suddenly the DNC decides, you know what, maybe we ought to let this guy play a little bit, right?

Maybe we should put him up there on that debate stage. What’s the worst that could happen? Well, it already has happened, DNC, because all of those people like myself who assumed based on what we had seen, that maybe you guys were doing the right thing this time. We just lost all faith in you. And even some of the more moderate members of the Democratic party were unhappy about this decision because you just suddenly changed the rules to accommodate a billionaire, a billionaire who did not need you to accommodate them. But you did it anyway because you want their money. And that tells us everything we need to know about the DNC these days. It also tells us that they want anyone up on that stage who may have a shot at taking down Bernie Sanders. In addition to the DNC’s rigoury over the weekend, we were also inundated with stories of the DNC, the Democratic establishment, freaking out and trying to find ways to stop Bernie Sanders.

Hillary Clinton came back out, took more very cheap shots at Bernie Sanders. John Kerry was overheard at a hotel room in Iowa saying maybe he’ll jump into the race to stop Bernie Sanders. The DNC also was thinking about maybe re-adding their super delegates to the first round ballot at the convention and then Tom Perez had to come out and say, no, no, no, no, no, no. We’re totally, totally not thinking that. Some people thought it but we didn’t do it. Yeah, they want to rig the whole thing so Bernie can’t win and this time they’re doing it more out in the open and if that happens, bad things are going to happen in this country, at least for the DNC, and I’m not talking about riots and protests and things like that. Yes, I’m sure we’ll see some protests, but you’re also going to see an entire generation of voters abandon you. That, that will be the punishment there.

They will be sick of it. They will have seen it twice in their voting lifetimes and they won’t put up with it. And I think the DNC is smart enough to understand this, but then again, they weren’t smart enough to understand they’d get huge backlash by changing the rules to allow the billionaire to get on the debate stage when they refuse to do it for people like Cory Booker and Julian Castro who had actually asked them to change the rules. And those people had a fairly decent shot at being president, at one time during this race, but they wouldn’t do it for them, but they’ll certainly do it for a guy worth a couple of billion dollars.