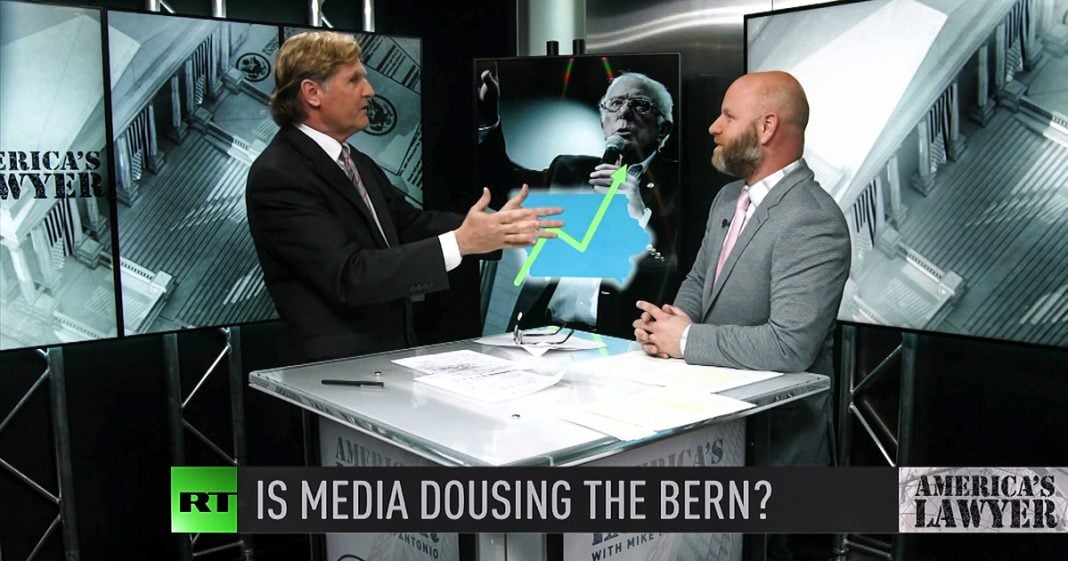 Via America’s Lawyer: Bernie Sanders’s poll numbers are surging in Iowa, so why exactly is mainstream media still painting him as an underdog? Mike Papantonio and Farron Cousins discuss.

Mike Papantonio:             This is a great media story right here. Bernie Sanders is now leading in the polls and the corporate media is doing everything they can to salvage his candidacy. This is remake of Hillary Clinton all over again, right? The wall street Democrat. Well, we had CNN, we had Zucker from CNN said that we must make sure Bernie Sanders doesn’t win. You remember the quote?

Mike Papantonio:             I mean, Sanders was killing everybody and Zucker who runs CNN, we got to make sure that, that Bernie Sanders does not win the primaries. Take it from there.

Farron Cousins:                  What’s happening right now is that every time these new polls come out and the latest one shows Bernie Sanders is nine points ahead of everybody in Iowa, they say, oh, well it looks like Bernie and Biden are tied. There, there is no tie. There is no tie nationally. Bernie Sanders is winning in every single poll right now, but they’re doing what they can to downplay it on one end. And then on the other end, and MSNBC honestly is the worst with this.

Mike Papantonio:             Okay. The Zucker, when Zucker says, we’ve got to defeat Bernie Sanders, the, the producers get that, get that message. The anchors get that message. All the talking heads get that message. They pick the talking heads that are going to go after Bernie Sanders. They did it the same way with the Hillary Clinton election. This is Hillary Clinton 2.0 with somebody that has at least a little bit of personality, but is much denser than Hillary Clinton. So now we’ve got to make Biden win, right? Biden’s gotta be the guy. Okay, let’s back up a little bit. You have done, I mean, I don’t want blow smoke here, but you’ve done some superb writing about where this all started. It started with the Bill Clinton years.

Farron Cousins:                  I mean, that also ties in with the group, Third Way, it was let’s be a little more moderate. Things are okay the way they are, so let’s reach out to the bankers. Let’s get their input. Let’s listen to them more than we listen to main street. You know, yes, they’re killing the unions out there, but unions aren’t that important. Look at the economy and when they say, look at the economy, Bill Clinton back then to Trump today and everybody in between, they’re only talking about the stock market. They’re not talking about the fact that wages for the average American worker haven’t grown in over 20 years.

Mike Papantonio:             This is part of what we’ve been talking, this is, if you go back and read your stories and I have, they’re well-written stories, Bill Clinton had to reinvent the Democrats. Right? So out of Bill Clinton comes this whole family, nepotism flows from that entire family all the way up the road. It started, I mean it look, it started well before Hillary Clinton ran. If you recall when Obama ran, they tried to pull the Sanders on Obama. They simply couldn’t pull it off. So they said we’re going to get ready for Bernie Sanders and Bernie Sanders, they destroyed his campaign in the Hillary race knowing that when they did the numbers, he would’ve beat Trump or had a better chance of beating Trump, than Hillary Clinton.

Who everybody absolutely, I mean, if you dig down on the woman she had no, there was nothing there to attract the Bernie Sanders types of voters. So they stayed at home. Right? So now here you’ve got wall street sounding off and saying, well Joe Biden’s our guy, he’s good on our policies. He loves wall street. He does everything he can to support wall street. And who else is in there? You’ve got the arms industry that don’t like Bernie Sanders. Joe Biden’s their guy, just like Hillary Clinton was their guy. This divide of Democrats, it’s almost, it’s almost unfair to talk in terms of a Democratic party. There is no uniform Democratic party anymore.

Farron Cousins:                  Right. And what’s astounding though, is that in spite of all of this, every time they come out with some new absurd attack against Bernie, the next poll to come out has him up even more points. All of their attacks to this point, and I think this is why they’re freaking out, have backfired. Nothing has stuck. Nobody’s buying into it. And people look around at themselves, at their neighbors, at their family, they say, look, things aren’t good for me. They haven’t been good for me in 25 years. Something has to change. And he’s the only one saying he’s going to chage it.

Farron Cousins:                  Oh, the coming out and saying, you know, nobody likes him. Everybody distrusts him. And I may not even, so she wouldn’t commit to supporting him. And she got even more backlash from that. You know, she has a 36% approval rating still to this day.

Mike Papantonio:             Yeah, but the disconnect with, it short of starting another party, this is not a Democrat.

Mike Papantonio:             And that’s a good thing and that, and we ought to embrace that rather than saying, let’s, let’s, let’s trash him, let’s make his life miserable. This is a story we’re going to follow more and more. The, as the heat heats up, they’re going after Bernie in a bigger way. Farron, thank you for joining me. Okay.