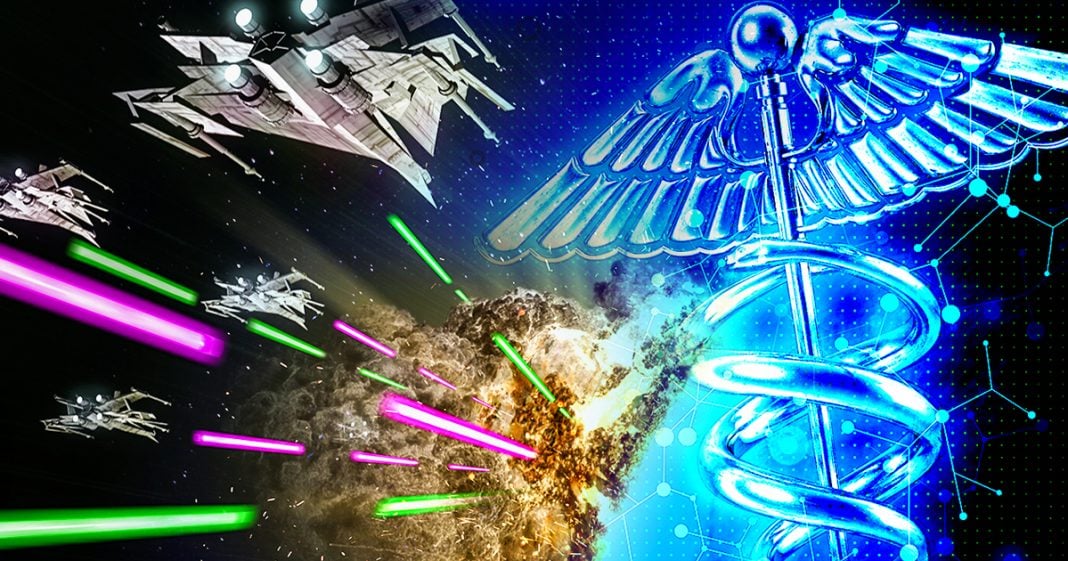 Donald Trump’s Space Force is officially a reality now, with a budget of billions of dollars. Representative Alexandria Ocasio-Cortez wants to know why we have a space military but not universal healthcare, and that is a very valid question. Ring of Fire’s Farron Cousins explains why one exists but not the other.

Donald Trump’s space force, thanks to the recently passed military budget, is officially a thing. A couple of weeks ago, they tweeted out the official uniform of the space force, which not ironically I guess is camouflage, you know, incase the space forces up there in space and needs to hide in space forests. But nonetheless, the space force is actually a thing now and it’s forever going to be a part of Donald Trump’s legacy. And here’s the thing, representative Alexandria Ocasio-Cortez, this past weekend on Twitter, made a brilliant observation. She said the following, the folks writing checks for a new space force are the same ones asking how are you going to pay for public college or healthcare? This is the richest country in the world. Our problem isn’t a lack of money. It’s a lack of good priorities and that is something we can change. This is the kind of common sense that we want our politicians to have.

Now, all of the arguments I have seen so far for a space force are absolutely insane. People say, well, no, because other countries could, I mean, they could shoot down our satellites. We need to be able to, if they can shoot down our satellites from the ground or even from an airplane, then we could go ahead and intercept those missiles with airplanes. Right? I mean, that’s, that’s kind of how that works. We don’t need to spend billions of dollars having troops in orbit. Not a smart idea. You know what it is a smart idea? We have millions of people dying in this country because they can’t afford to go to the doctor. One in four people who need insulin to survive are not taking it because they can’t afford it. Wouldn’t it be smarter to let these people live, you know, to let them continue to be productive members of society and contribute to the economic growth of the United States? Or now, we’re just going to let them die because we want to send camouflage troops into outer space.

This is stupid. As a country, we do not have our priorities straight. And I don’t know that we ever have in my entire lifetime. The government is supposed to take care of its citizens, right? That’s its job. That is the job of the federal government and they’re failing us. They’re failing us with education. They’re failing us with healthcare. They’re failing us on climate change. They are failing us across the board. And AOC gets it. Bernie Sanders gets it because he brought up a similar point not long ago too, but too few people in Washington DC get it. So the question is, why? Why a space force and why not universal healthcare? And the answer is, who profits from it? Universal healthcare, who profits? Well profits go down for some members of the private sector, but a space force that’s billions upon billions of dollars every single year for the military industrial complex. Right? That whole machine, defense contractors, defense lobbyists, all of those folks make billions off of this space force. And that, and that alone is why this program exists. But things like universal healthcare in this country do not.