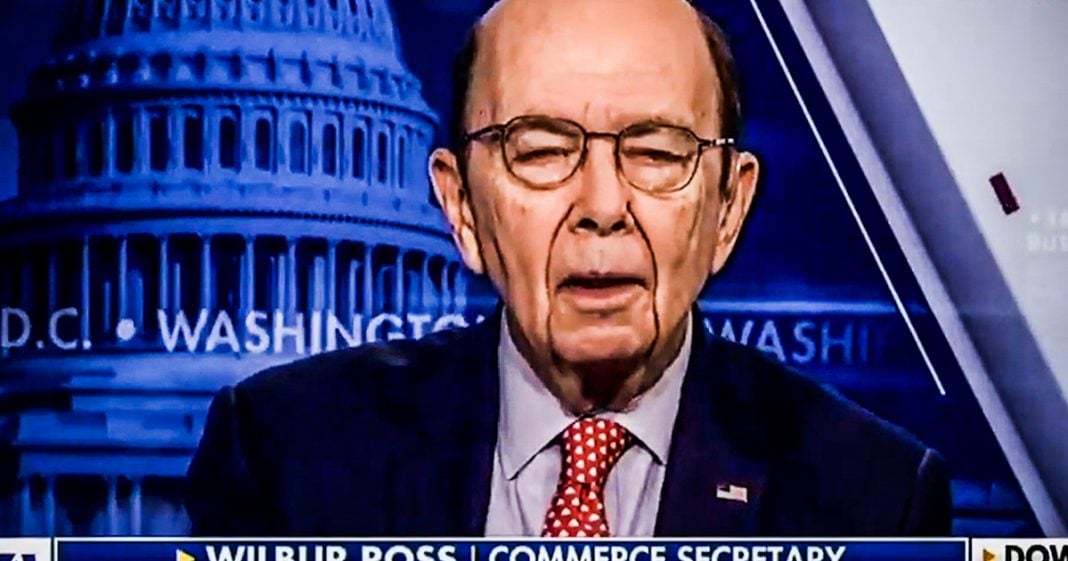 Commerce Secretary Wilbur Ross appeared on Fox News this week to talk about how awesome the coronavirus is going to be for the U.S. economy. Ross thinks that companies will be afraid to do business with China and that the Chinese economy will slow down tremendously due to the virus, and that will be a huge benefit to the United States. Ring of Fire’s Farron Cousins explains why Ross is absolutely wrong in his analysis.

While most people around the globe are freaking out, for some reason, about the Coronavirus commerce secretary Wilbur Ross wants everybody to chill out for a second because this thing’s going to be super, totally awesome for the US economy. Take a look at what Wilbur Ross said on Fox news.

Wilbur Ross:                         But the fact is, it does give businesses yet another thing to consider when they go through their review of their supply chain on top of all the other things, because you had SARS, you have the African swine virus there. Now you have this, it’s another risk factor that people need to take into account. So I think it will help to accelerate the return of jobs to North America. Some to US, probably some to Mexico as well.

You know, it was really nice of Wilbur Ross to almost completely wake up to give that interview. But, going to help the US economy, the Coronavirus going to bring our jobs back to the United States? I’m not sure that’s how that works. In fact, the only sector of the economy that the Coronavirus is going to help are greedy hospital executives and pharmaceutical executives. Oh, they’re sitting there rubbing their greedy little hands together saying, oh hell yeah. We’re going to get all these rich hypochondriacs in the United States come into our hospital every time they have a cough because they’re afraid of the Coronavirus because the media has hyped it up to be something absolutely ridiculous. Just like they always do, folks. There is always the next epidemic, the next pandemic, swine flu, bird flu, Ebola, all of those horrible, absolutely terrible things coming to our shores and they’re absolutely going to kill all of us.

And yeah, people get sick and yes, sometimes people die. Is it a measurable percentage of the United States population? No. What about the Chinese population, right? Everybody’s freaking out about that. Well, really not, not that bad. I mean, yes, it’s bad for the people who have it. Obviously it’s horrendous for the people who’ve lost loved ones to this virus. This virus is something to be taken seriously. Do we need to all go hide in underground bunkers for fear of catching Coronavirus? No, we do not. The media hypes these things up to a point where we almost can’t even address the issue because everybody’s overreacting about it. Something does need to be done about the Coronavirus. Don’t get me wrong about that, but do we shut down the entire planet because of it? No. There are much worse communicable diseases out there that we’re just ignoring because they’re not flashy on the news at the moment, and there have been wonderful books written by medical professionals telling us that this mass hysteria over diseases like this.

I forget the first name, but last name is a Seagull, I believe, has written several books about this. They’re phenomenal. I suggest everybody read them and calm the hell down, but that’s an aside. Back to Wilbur Ross’ point. Now he is saying that if the Coronavirus continues to just wipe out China, which is not even doing that yet, but if it does, then oh man, we’re going to have so many manufacturing jobs coming back to the United States and Mexico, as they point out at the end of that clip. Everybody’s going to be working again because all the Chinese are dead. I understand that that’s the point he’s trying to get at, folks. All we gotta do is infect all the Chinese and suddenly all these jobs come back.

These are the ranting’s of a madman or perhaps a man who was still half asleep when he gave that interview. We do know Wilbur Ross has a bad habit of falling asleep during meetings, during presentations, during most things he has to do on a daily basis. So maybe he was dreaming, maybe he was talking in his sleep in this clip. Let’s hope for that because I truly don’t want to think that we have a madman being our commerce secretary who thinks that all of the Chinese, or even most of them dying, is somehow going to benefit the United States economy.