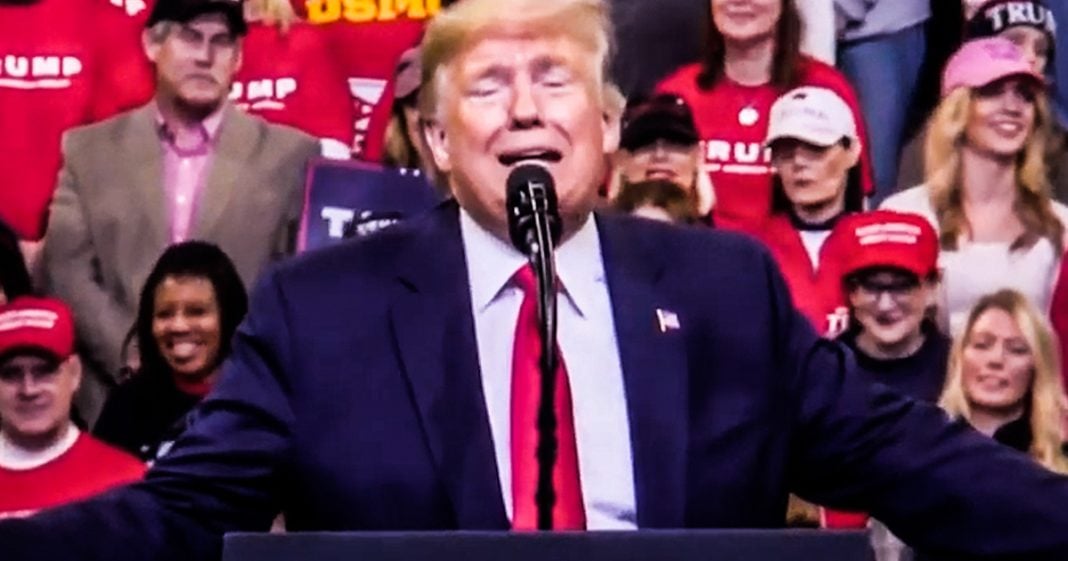 During a speech in Iowa on Thursday, Donald Trump bizarrely claimed that Democrats want to kill everyone’s cows, and then he issued the ominous warning to the crowd that they were next. His demeanor during the speech is one of a either a psychopath or someone suffering from dementia, but either way, the man is absolutely insane. Ring of Fire’s Farron Cousins discusses this.

Even though he is not going to be a part of the Iowa caucuses on Monday, Donald Trump decided to head to Iowa anyway and give yet another insane speech and yes, insane is about the only word you can use to describe it because at one point Donald Trump started talking about how Democrats want to kill not just cows, but also possibly voters. Take a look

You’re next he tells the crowd, yes, Democrats want to come and murder you to stop your emissions. Now obviously several different things to address in that video, but let’s start with one of the most obvious which isn’t what Donald Trump said, but how he said it. He looked like the drunk old man posted up at the end of the bar ranting and raving about whatever it is he could find about, the cows, they’re going to kill all the cows and probably you next. He looked insane. I mean, if you saw the guy at the bar doing that, you’d probably walk down to the other side to go order your drink or you’d maybe find a new bar to go to because that guy’s insane and you don’t want to be around it. Second of all, cows are not even the number one producer of methane in the animal kingdom. That’s actually termites.

Third, The Green New Deal does not call for the mass slaughtering of cows to stop the methane emissions from them. In fact, climate scientists have told us repeatedly that while cows do contribute methane to the atmosphere, they’re nowhere near being an actual concern for greenhouse gas emissions. So yes, eventually that is something we would probably need to address, they tell us. But is it a top concern or priority? Absolutely not. The Green New Deal does not call for any of that, but that’s what Trump’s doing because he can’t defeat The Green New Deal on policies. So he takes it, reduces it down to an absolute argument, then hammers that argument all day long. They want to kill all the cows and I love cows. I love cows so much. He says he loves them so much that he eats them at practically every meal.

I mean, this is a guy that dines at McDonald’s constantly. He orders his steaks well done with ketchup. Oh, he loves, loves cows all right, and we can clearly see that around his midsection. He’s not trying to save them, he’s trying to save them for his dinner. That’s what he wants to do, but again, his entire argument is absolutely insane. His mannerism at that speech was that of a, again, drunken guy at a bar is the only thing I can think of. A crazy old man ranting and raving on the sidewalk that you cross the street to avoid. That’s what we have sitting in the White House, and if you can, honest to God, listen to that man, give that little rant right there saying, Democrats are going to kill cows, then they’re going to kill you. If you listen to that and you still support him, then you’re just as crazy as he is. There is no way around that at this point. If you support the crazy man, then you yourself probably need to get your brain checked out.