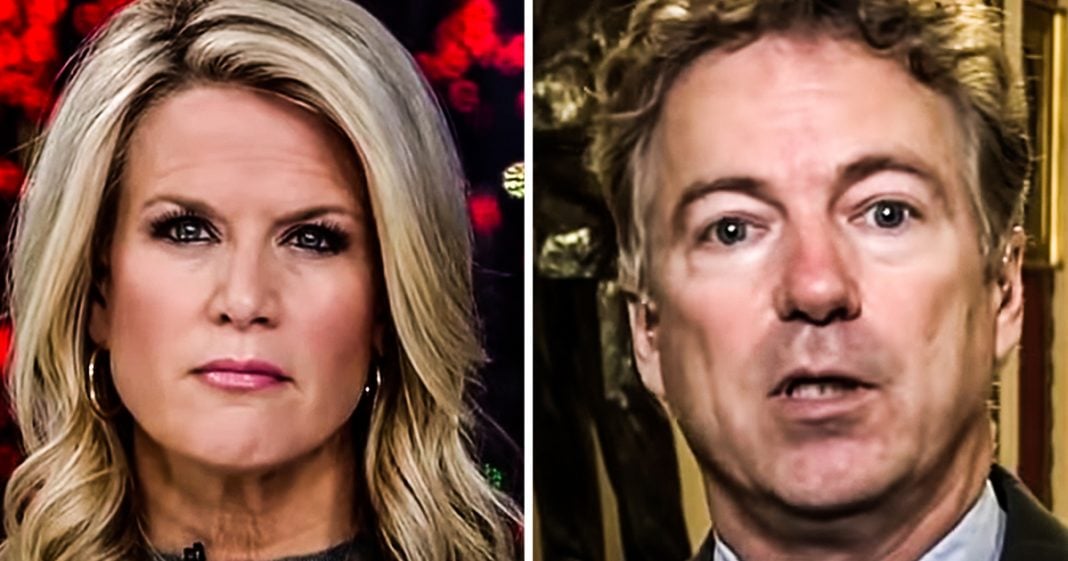 After getting smacked down by Chief Justice John Roberts during the Senate impeachment trial for trying to “out” the whistleblower, Rand Paul decided to just go ahead and name the person he believes is the whistleblower to the press. Not only could this land Paul in legal trouble, it shows that this man is really just a petulant little child who always has to have his way without any regards for the rules. Ring of Fire’s Farron Cousins discusses this.

Rand Paul, the eye doctor turned United States Senator, submitted his question yesterday to Supreme Court chief justice John Roberts, as was the protocol yesterday. Incase you haven’t been following the impeachment the last two days, senator’s allowed to write down their questions to the council, you know, the House impeachment managers and Donald Trump’s lawyers. They submit it to John Roberts. John Robertson then reads the question and whoever it’s addressed to gets the chance to answer. So Rand Paul jotted down his little question, sent it up to John Roberts with a smirk on his face and then was shocked when John Roberts read it to himself and then said, I’m not going to read this question. You see, what happened was that Rand Paul attempted to out the alleged whistleblower, or at least name the name of the person who he thinks is the whistleblower, while also accusing them in his question of somehow being politically motivated to go after Donald Trump.

And the reason we know what was on this card, this question that John Roberts wouldn’t read, which because immediately after John Robert said he wasn’t going to read it, little whiny Rand Paul got mad, through what vanity fair described as a congressional hissy fit. Stormed out of the impeachment trial and immediately went looking for reporters where he then read his question, naming the alleged whistleblower. He then, if that wasn’t enough for you, because most people don’t like watching videos of Rand Paul, I guess, and he wanted to make sure people saw it. He got on Twitter and repeated it on Twitter, naming the alleged whistleblower, or at least the person who Republicans think is the whistleblower, as if any of that matters with what’s happening right now. See whiny little Rand Paul and yeah, I know I call Donald Trump out for giving people stupid little nicknames, but I think this one definitely fits Rand Paul.

He absolutely is a whiny little petulant baby. He thinks he is owed some kind of admiration, I guess, from the American public, from all of the other people that he works with on Capitol Hill, including the chief justice of the US Supreme Court and when he doesn’t get it, when he doesn’t get his way, he throws a congressional hissy fit and he stomps out of the building saying, well, I’m taking my question and I’m going home. I’m going to go find mommy and wine to her about it. Which mommy in this case would have been the press or Twitter. But here’s the thing, what little Rand Paul did there is likely illegal because. This was not anything having to do with as Alan Dershowitz says the public interest. This wasn’t about protecting any part of the United States or the constitution or anything like that. This was not a matter of national security. This was not any one of the very few scenarios under which it would have been okay or legal to name the name of an alleged whistleblower. This was Rand Paul being angry because he has the mentality of a four year old and lashing out. Soon after Rand Paul behaved like a child, the #arrestrandpaul began trending on Twitter.

But don’t worry all you Rand Paul fanatics out there, nothing’s going to happen to this little dweeb. He’s not going to get arrested. He’s not gonna get punished. He’s not going to get fined. Nothing ever happens to these morons. So I’m going to go ahead right now and address the people of the good state of Kentucky where Rand Paul is your Senator. So is Mitch McConnell. Are y’all proud of yourselves, Kentucky? You look at what’s happening in the Senate. You look at your two senators and the way they have behaved, not just during the impeachment trial, but forever. You look at those two people and you understand those are the representatives of your state. All these stupid little things they pull. All the conniving, all of the whining, all of the bitching, that’s reflective of you. And if I were you, if I were in your state and I were voting, you couldn’t pay me enough money to ever vote for one of these two crazy lunatics that you people keep sending to the United States Senate.