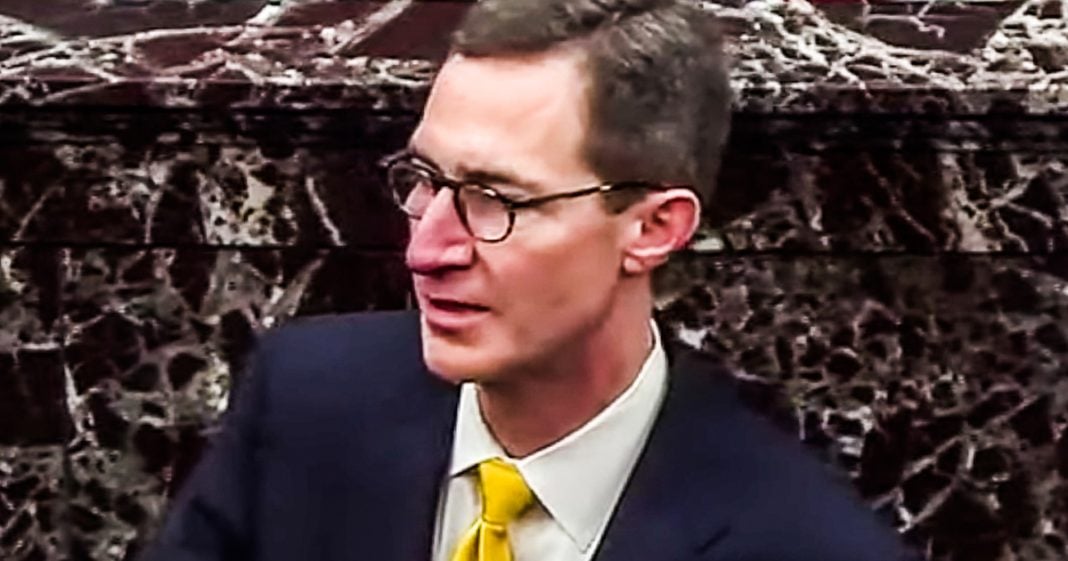 Donald Trump’s lawyers have launched a new defense of the President’s actions, claiming that a little foreign meddling in our electoral process is ok. Democrats aren’t taking this new defense lightly, and Trump’s lawyers are getting hammered over this absurd claim. Ring of Fire’s Farron Cousins explains what’s happening.

What’s a little quid pro quo between a couple of friends, right? Well, at least that is the legal argument that Donald Trump’s lawyers attempted to make on Wednesday evening. They argued that, sure, a little bit of election interference, a little bit of foreign meddling, that’s okay. It’s all right to do those kinds of things. If a foreign country comes forward with opposition research for your campaign, his lawyer said, it’s perfectly acceptable for a president to accept it. You also had Alan Dershowitz come out and say that, listen, abusing power when you’re the president is totally fine as long as you’re doing it so that you get reelected. As long as it’s for political purposes, abuse of power, according to Alan ‘I kept my underwear on’ Dershowitz, is absolutely something that we should be okay with. Now, this is actually quite an interesting argument coming from the Trump administration.

Well, several interesting arguments, I guess. The first one that, hey, it’s okay to accept opposition research from a foreign country. No, that, that’s still illegal, for now at least. You cannot accept foreign help in an election. The law is still very clear about that. Foreign countries are not allowed to donate material or immaterial to any US election. Opposition research would be material, cash would be material. They can’t do that, it’s illegal. And yet here, Donald Trump’s lawyer standing on the floor of the Senate yesterday saying, nah, you know what? Totally okay if the president does that, just like Donald Trump told us back in July during an interview with ABC’s George Stephanopoulos, that yeah, if a foreign country offered me some opposition research, I’d take it. I’d be foolish not to, he told us. So those are the arguments of the, of the Trump lawyers. It’s okay.

A little bit of crime, you know, helps the campaign go round, I guess. But it’s still illegal. But, but to me, what’s really interesting is the evolution of the argument itself. Right? Couple of days ago it was, there’s no crime. He didn’t do any of this. Why are we talking about it? And now, literally just a couple of days later, they’re like, yeah, I mean, a little bit of crime is okay, right? A little bit of crime never heard anybody. A little bit of crime might actually be good for your presidential campaigns, as Dershowitz told us. But no, it doesn’t matter how much your legal argument shifts or how it evolves from, there was no crime to crime is totally cool. It’s not. It’s not okay. We see what you’re doing. We see that you’re scrambling. And the worst part about all this is that they’re probably going to win, right? These Republicans are not going to vote to get rid of Trump and these lawyers are gonna think it’s because of their awesome, super great legal arguments.

And that to me is one of the most disappointing things beause we went into this knowing that Trump’s not getting removed from office. But these lawyers are going to go back home after this, you know, tell their spouses their, their loved ones, their families, you know, their students, if they’re a teacher, they’re going to be like, did y’all see my slam dunk? I went up there and said crime was pretty cool, and crime can actually help your campaign. I am a great lawyer, but you’re not. You’re all idiots and none of you should be proud of the arguments that you have made in this trial.