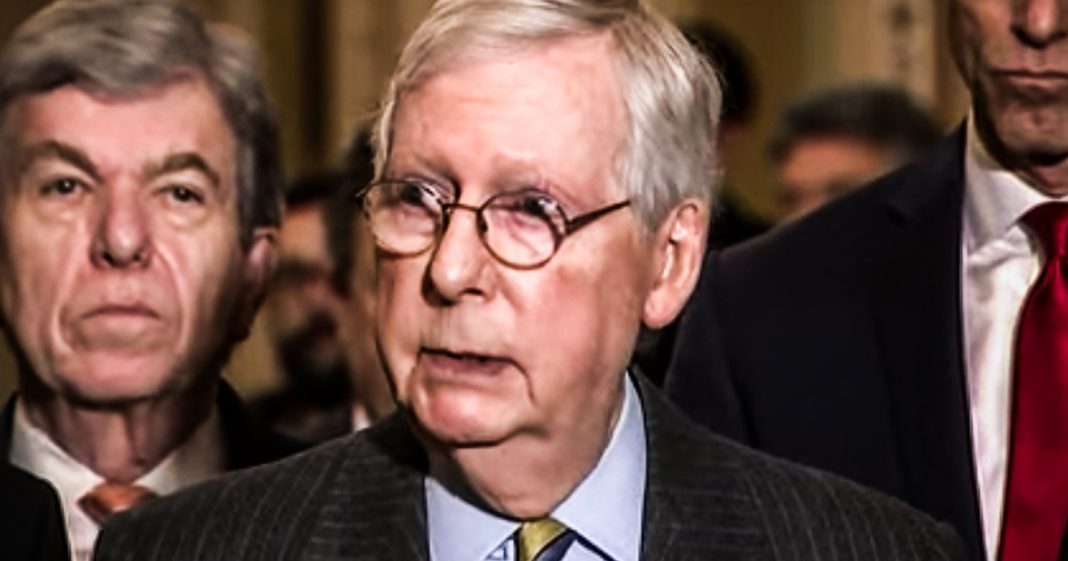 Republicans in the Senate are hoping that they can bring the entire impeachment of Donald Trump to a close on Friday, ending this chapter of the Presidency and moving forward. They can only accomplish this by voting to not allow new witnesses or documents, and Republicans now believe that they have secured the votes to stop the case from proceeding. Ring of Fire’s Farron Cousins explains what could happen on Friday IF the Republicans shut it all down.

The last 36 hours with regards to the impeachment trial of Donald Trump have been insane, and that’s really putting in mildly. After all, about 36 hours ago, we had Mitch McConnell telling us that he didn’t think he had the votes. He thought Democrats had enough votes to call for witnesses to possibly even call for new documents and evidence. Oh, woe is me, the Democrats may have won this thing. And now here we are little under 36 hours later and Lindsey Graham is telling us, oh no, we got the votes back. Yeah, we’ve secured it. We’re confident now. We’re pretty certain that this entire thing might be nothing but history by Friday. Republican Senator John Barrasso, told reporters last night, that the aim of the Republicans in the Senate is to vote down witnesses on Friday, then immediately call for a vote on whether or not to convict or acquit. And if that happens and they vote to acquit after they vote to not take any witnesses, that’s it. The whole thing’s over. It’s history. And that could happen by this time tomorrow. By this time tomorrow, it could have already happened and it’s over. The impeachment is done with.

So then what? Because at that point, supposing acquittal happens tomorrow, we’re a little over nine months away from the general election. Nine months, nine months is an eternity in the political world. It hasn’t even been nine months since the Mueller report dropped, folks. And think about how few people remember what was in that. And I know people get angry when I say this, like, oh, you ought to have a little more faith in the American public. I don’t because I’ve been doing this for 15 years and I’ve been watching them every day. I have no faith in the American public. Nine months from now they’re going to forget about nearly all of this. Oh, they’ll remember there was some kind of Ukraine thing, but wasn’t the president acquitted for that? Yeah, but the Republicans were. Yeah, but I mean the Democrats didn’t, it’s going to get muddied because Republicans, if they acquit tomorrow, if they acquit next week or even the week after, what’s going to happen is that every single one of them is going to be doing victory laps around this country for the next nine months and in those victory laps, they’re not going to mention how they obstructed everything.

They’re not going to mention how they rigged everything. They’re not gonna mention how they didn’t comply with subpoenas in the House impeachment investigation. They’re just going to talk about the fact the Democrats had nothing. We won. It was a witch hunt. It was a hoax and Trump was acquitted. How can you explain that? If they had something on him, he wouldn’t have been acquitted. We would have voted to convict him, but we didn’t. So they must not have had anything. And if you think I’m wrong, then you need to pay better attention to the American public and yeah, folks, a lot of this is the fault of the Democrats. They rushed through the impeachment in the House. There have been so many bombshells that have been dropped since those articles of impeachment made their way over to the Senate and many of those bombshells are not included in this impeachment report that the House sent over, they’re not. Democrats could’ve and should’ve waited. They should’ve continued the hearings. They shouldn’t have even voted on those articles of impeachment until March, March. That’s what I say. Should have been in March. All this impeachment trial stuff happening right now that we’re covering and talking about every day.

No, we should still be covering and talking about hearings and depositions that the House of Representatives is taking because they should still be doing that. They should have waited out the legal battles in the courts to force Trump’s people to comply with the subpoenas. They didn’t feel like doing that. They thought they had enough. They thought they had the case. This is going to backfire on the Democrats and yeah, the polls right now are in their favor and those polls are going to flip. I promise you, in the next nine months. This is not good. Not just because Trump’s being acquitted. We all knew that was going to happen. But what a lot of people don’t realize because they haven’t been paying attention like those of us in this business have been, is that the public, nine months from now, will remember about this much of what actually happened and the rest of their memory on it will be fabricated by the GOP during their victory laps between now and November.