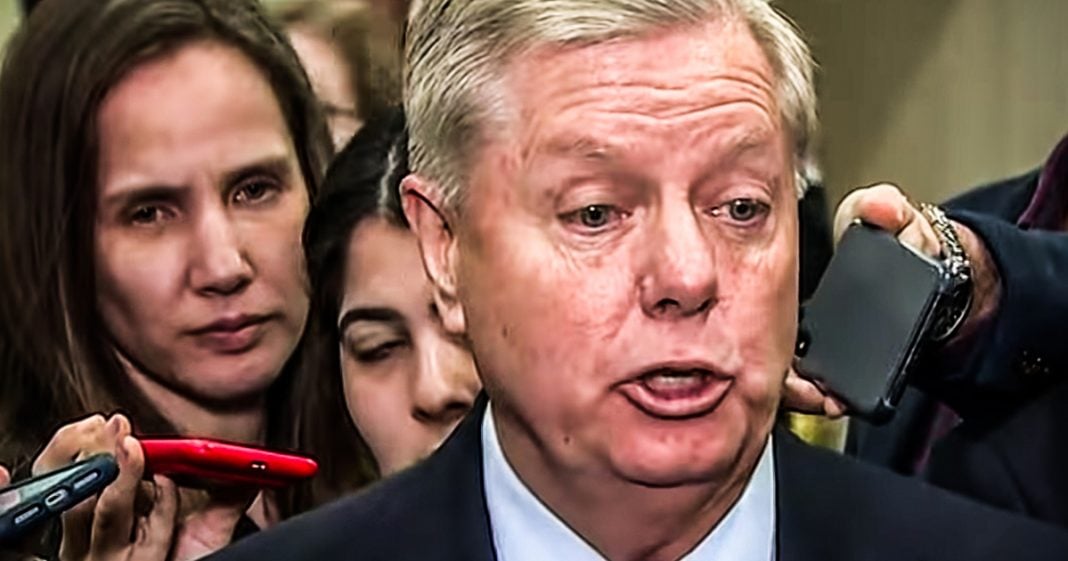 Lev Parnas has now thrown Lindsey Graham under the bus, alleging that Graham was in on the entire Ukraine scandal and anxious to be a part of it. This helps explain why Graham suddenly found a new love for Donald Trump after spending several years attacking him. And even though this likely won’t effect the impeachment, it could certainly hurt Graham’s chances of reelection. Ring of Fire’s Farron Cousins discusses this.

Lev Parnas appeared on Anderson Cooper’s show on CNN yesterday evening to explain that Lindsey Graham, one of Donald Trump’s staunchest defenders in the United States Senate, was also involved in the plot to get dirt on Joe Biden from Ukraine. And according to this interview that Parnas game, gave to Anderson Cooper, not only was Lindsey Graham involved, he was actually involved and working on it before Giuliani tapped Parnas to come in and start working on it. Parnas claimed that Graham had been working on this particular issue, getting dirt on Biden from Ukraine, since at least 2018. Now Parnas did say that at the moment, he is not certain of the extent of Graham’s involvement. He doesn’t know everything that Lindsey Graham did and he never personally dealt with Lindsey Graham with regards to the Ukraine scandal. But he does know from Rudy Giuliani that Lindsey Graham was absolutely involved in it and Lindsey Graham was the guy working on it before Parnas was called in. So if Lindsey Graham was working on this all the way back to 2018 that’s right about the time when we saw that massive shift in Lindsay Graham, right? He went from, I don’t know if I agree with Trump on these things, to going golfing with Donald Trump, hanging out with Donald Trump, defending Donald Trump on all the cable news programs he could get on. That was right about the time people started wondering, I wonder what they have on Lindsey Graham. I wonder what’s happened to Lindsay Graham. And then John McCain passed away and then Lindsey Graham went even more crazy.

And if what Parnas is telling us here is the truth, and again, Parnas has nothing to lose at this point by coming clean. I think that kind of explains what happened to Lindsay Graham. Now, don’t get me wrong, Lindsey Graham has always been a horrible human being. He was just able to cover it up sometimes. He stopped covering it up in 2018 is what happened. You know, he dropped the facade and said, this is who I am. I’m loud and I’m proud and I’m corrupt as hell. And Parnas is telling us now that the depths of his corruption, we didn’t even fully understand yet. We didn’t even know this. Now, the big question is, is this going to affect Lindsey Graham in any way? In the Senate, in the impeachment trial, the answer is absolutely not. Republicans have already done a pretty good job of trying to say that Lev Parnas is not somebody that we should trust, just like they did with Michael Cohen. Oh, look at him. He’s a criminal. We can’t trust him anyway, even though we all worked with him for quite a while, so that’s what they’re doing to Parnas. But Lindsey Graham’s already facing a very tough reelection in his state of South Carolina. His challengers are raising money from all over the country. Lindsey Graham is a deeply despised human being outside of the state of South Carolina. So much like Ted Cruz and the Beto O’Rourke race, you got all this outside money coming in, trying to help the challengers to Lindsey Graham because they want him gone. And this story, if somehow it can be proven accurate, could absolutely cost Lindsey Graham reelection in November.