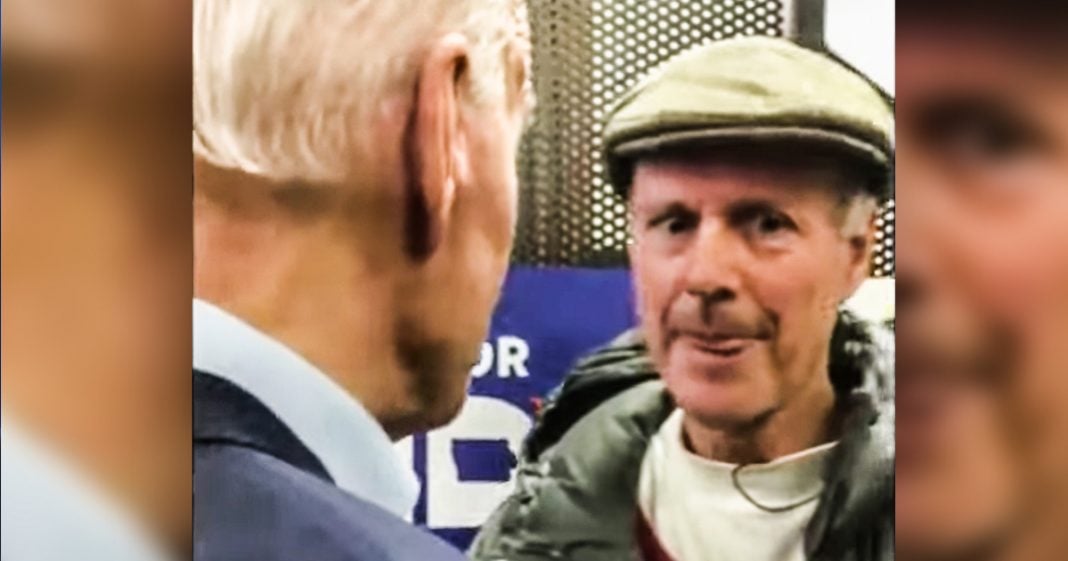 In the past few months we’ve learned a lot about Joe Biden, and that’s not good for Biden. The former Vice President continues to lose his cool with voters, lashing out and mocking them while telling them to go and vote for someone else. And that’s exactly what these voters should do. If Biden can’t take this kind of criticism or questioning then he doesn’t have the temperament to be President. Ring of Fire’s Farron Cousins discusses this.

So by now, I’m sure everybody’s seen the clip earlier this week, Joe Biden, once again, confronted by a Democrat, asked him about his policies and Biden goes berserk. You know, he, he kind of grabs the guy’s jacket a little bit in a very bizarre and bullish way. Touches him and then tells him after berating him a little bit, accusing him of being a Sanders supporter when he was actually a Steyer supporter, then tells him you ought to vote for somebody else. And as I pointed out a couple of weeks ago, that should just be Joe Biden’s campaign slogan because that’s all he seems to want to tell voters who question him on the campaign trail. Joe Biden 2020, you ought to vote for somebody else. And honestly, that’s good advice too. You ought to vote for somebody else because Joe Biden ain’t it. I mean, we have seen report, not just report, all right.

We have seen video after video after video after video of Joe Biden attacking these voters who have legitimate concerns about his policies and his platform. They walk up to him, most of them calmly, collectively, and say, hey, I have an issue with your stance on pipelines. Well, listen here, child, you ought to vote for somebody else. You probably vote for Bernie Sanders. And then he gets pissed and walks off. You know, back in 2016 we heard a lot of comments from establishment Democrats about Bernie Sanders and his temperament because Bernie Sanders seemed a little standoffish. And Bernie Sanders would kind of, you know, tell people what for right to their face. He wouldn’t ever touch them the way that Joe Biden always seems to, in an intimidating way. But Bernie wouldn’t back down and he was a little bullish but not as a bully. And they always told us back then, he doesn’t have the temperament to be president.

We talk about temperament of the president today, that Donald Trump doesn’t have the temperament. He’s too quick to anger, too quick to fly off the handle. So where all those stories about Joe Biden, right? That’s what I want to know. Joe Biden is not that different from Donald Trump in terms of how they are as human beings. They cannot handle criticism. They cannot handle tough questions and they just don’t want to deal with people who they seem to disagree with. Then you’ll look at a guy like Bernie who isn’t afraid to walk up to people who straight up say, I don’t agree with you, and what does he do? He explains to them why he’s right. He doesn’t get in their face and say, well then you ought to vote for somebody else. Elizabeth Warren doesn’t walk up to people and say, well, you ought to vote for somebody else.