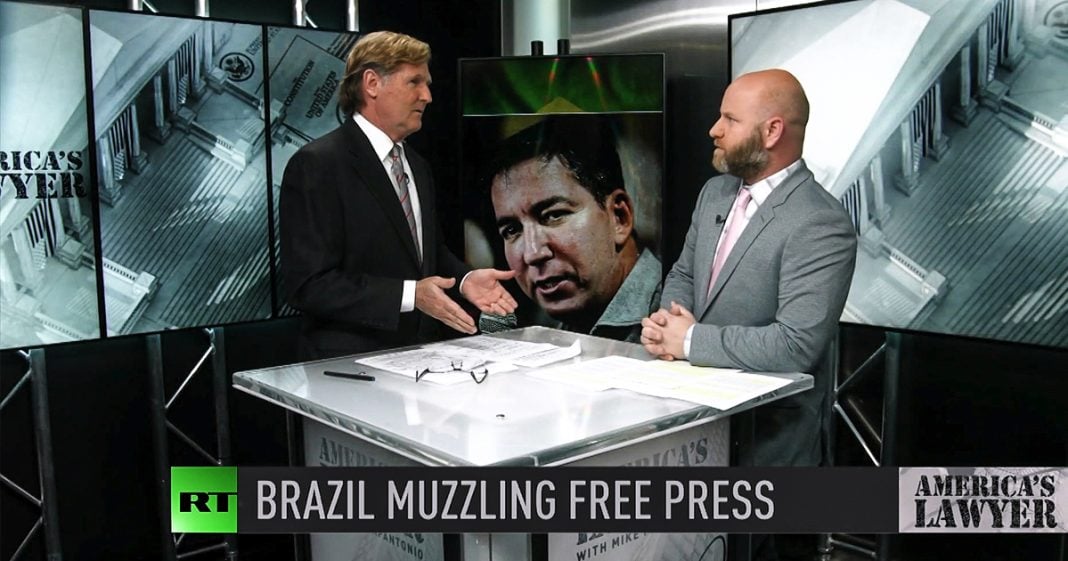 Mike Papantonio:             Journalist Glenn Greenwald has done an amazing job uncovering the corruption of the Brazilian government. Now, the leadership in Brazil is trying to silence him with criminal charges the same way they tried to silence him here in the United States. Joining me to explain this as Farron Cousins of trial lawyer magazine, has followed Glenn Greenwald’s career a long time. This guy is a hero. I mean, he’s always been a hero, all the way back to the time that the US government was after him. He was a hero because he wants to get the story out. Lay this story out for us.

Farron Cousins:                  Right, this is particularly disturbing what’s happened here, and I guess it’s been about a week or so since they launched these charges against him. But what they’re trying to say, the government of Brazil, is that hackers had gotten into some court files and uncovered a whole treasure trove of corruption that they then gave to Glenn Greenwald and Greenwald reported on it. But they’re saying that the hackers actually did this at Glenn Greenwald’s direction. He told them where to go, who to target, what to look for. Glenn Greenwald, according to the charges, was the mastermind of this entire project, except for the fact that the Brazilian police had already looked into this. Because back when he first reported this, they wanted to know, okay, was he involved?

They did a hugely thorough investigation into Glenn Greenwald and they said, we have come to the conclusion that Greenwald was in no way involved in any of the hacking, any of the direction. He received the materials, but did everything he possibly could to make it clear that he wasn’t involved and didn’t want to be involved.

Mike Papantonio:             Let me tell you why so many people think this is, it’s an important story in support of Greenwald. Okay, he a great journalist. The intercept is a great, it’s just a great source of information because they’re hard workers. The concern that you’re seeing about this story is, is even bigger than that. They’re saying, if you take a look at South America, whether you’re talking about Venezuela, whether talking about Brazil, you can go all over, all over that area down there. The problem that they can’t overcome is corruption. And if you take a look at what happened in Venezuela, very good example, it was a spiral down, almost immediate. And when you face the music and you, you follow that train, it’s corruption at the top.

Here’s where the story, you talk to economists about this story, read some side, some side notes from the economists. They say that is the problem. That’s the problem with them ever pulling it together in a sustainable way, is corruption, corruption, corruption, whether you’re talking about Panama, Venezuela, Brazil. And so that’s, that’s really what Glenn Greenwald was focusing on. He’s trying to say, look, you got Bolsonaro, you got Moros, you got these characters that have been involved with corruption, not just during their term is being in charge, but a generation of corruption.

Mike Papantonio:             And the, the economists are saying, are they going to bring that culture to the United States? I mean, that’s some of the dis, that’s some of the discussions you’re actually hearing. The Catholic church is another part of the story. What impact do they, does the Catholic church have on corrupt politics? How do they let it go? How have they, if you take a look all around South America, it was Pinochet whatever it is, the Catholic church sides up with whoever’s in charge because they want to make sure that their right to run the Catholic churche is uninterrupted. This is a complicated case. I mean, this is, this is far more complicated than Glenn Greenwald. This has to do with this concept. I think it’s called amoral familism and that is, you can’t correct the problems in South America unless you correct the corruption. That’s what Greenwald is trying to do.

Farron Cousins:                  Right, and that’s what Greenwald has always tried to do. And in the process he’s, you know, made enemies on the left, enemies on the right, enemies, you know, all over the place. But at the end of the day, the guy is, is truthfully reporting on the stories he’s doing it. Whether or not you like it, that that’s your problem. Greenwald does not have a history of, of telling lies or spreading misinformation.

Mike Papantonio:             If you look at the stories that attached to this, the stories that attached to this are just as important, and that is, is corruption so endemic of South America and central America that we can’t ever correct it? And what is the role of the Catholic church in that corruption? I think, these discussions are side discussions, we could do an entire segment on them and we probably should, because that’s what Glenn Greenwald really is trying to uncover here. It’s a lot more complex than this story alone.