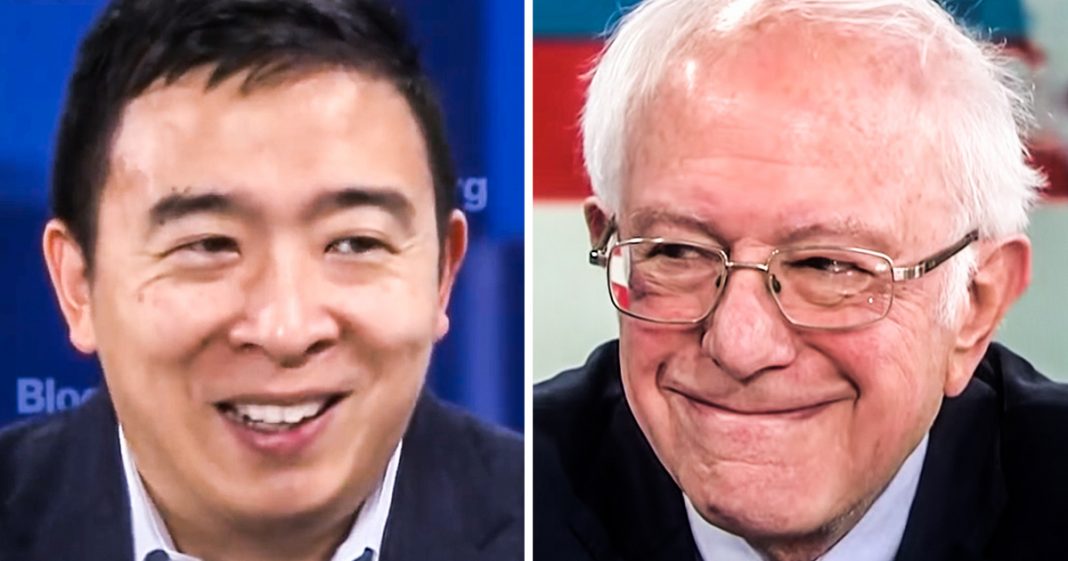 Andrew Yang says that his supporters may end up flipping to Bernie Sanders if Yang doesn’t win the first round of voting in the Iowa caucus next week, a sign that the Yang Gang might make the permanent shift over the Bernie if Yang ends his campaign. While Yang’s numbers have been rising, they still aren’t quite enough to keep him the race without some victories, and those supporters could solidify Bernie as the frontrunner. Ring of Fire’s Farron Cousins discusses this.

Yesterday, Andrew Yang, while speaking to a Bloomberg reporter, admitted that his supporters may in fact go to Bernie Sanders in a later round of Iowa caucus voting. Now to explain what that means, let’s not forget the Iowa caucus, sometimes there are several rounds when there is no clear winner, you gotta be, you know, first pass the post. If they don’t get it, they go to a second round with fewer candidates. So if that happens, if there is a second, third or fourth round, and Andrew Young is not a part of that, he told this reporter, which was basically a wink and a nod to his supporters that if I don’t get it, if I don’t make it past that first round ballot, I think they’ll go to Bernie Sanders.

That’s a very powerful message. Bernie Sanders has already taken the lead in Iowa in all of the latest polls, some of them by as much as 9% but you look around this country and yeah, Bernie Sanders is leading in the polls. You still have roughly half of Democrats in this country who actually haven’t made up their minds though. So when we see him polling at, you know, 30% nationally, we still have 50% out there who don’t know what they’re going to do. And Andrew Yang who anywhere polling, depending on the poll, depending on if it’s state or national, 4% here, 10% there, those are very real numbers. They’re not enough, unfortunately for Yang and his supporters, to win him any States at the moment. And I think Andrew Yang is starting to, to realize that. And it’s a sad realization to come to because Yang has run a fairly decent campaign. I don’t agree with him on many of his policy issues. I do feel he is far more libertarian than he is progressive, but he’s run a good campaign and he’s hit a lot of great points for the public. And he does have some platforms out there that other candidates don’t, that I wholeheartedly support.

But, and this is not a dig at him, so please don’t take it that way. He doesn’t have the numbers and voting starts next week. So without those numbers, he does not see much of a path forward. But he still has a decent amount of supporters that have to go to somebody and he’s signaling to them right now, Bernie is the most like me. There is a lot of overlap and this is what he told the reporter. There’s a lot of overlap with what we believe and what we would like to accomplish. So while you have the other candidates trying to tear Bernie down, here’s Andrew Yang coming out, trying to build Bernie up. Not just build him up but say listen supporters, if it ain’t me, this guy’s a lot like me in certain ways and this is probably where you need to go. That’s what that interview yesterday was about and that is something we should be very happy about because 4% may not be enough for Yang, but you add 4% onto Bernie’s 9 point lead. Suddenly you’re talking about numbers that the other candidates cannot match up to. Suddenly Bernie Sanders is very clearly and solidly the front runner in a way that even the corporate media won’t be able to say, it’s anybody’s race. No, Bernie needs those Yang supporters, and if those Yang supporters are honest about wanting big structural change here in the United States, then they need Bernie as well.