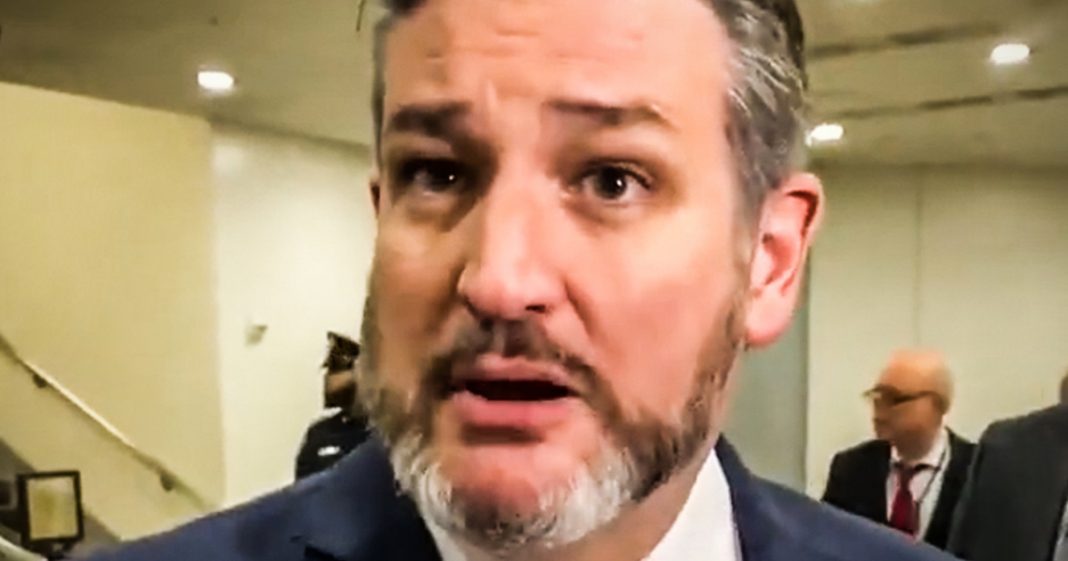 Ted Cruz was absolutely prepared to talk to reporters following Tuesday’s impeachment hearings, but he wasn’t exactly ready to answer the questions that they were asking. Cruz delivered what appeared to be a very well-rehearsed diatribe about Joe and Hunter Biden, but reporters demanded answers about impeachment witnesses, including John Bolton, and Cruz got into a fairly angry exchange with the reporter as a result. Ring of Fire’s Farron Cousins discusses this.

Yesterday, Ted Cruz following the impeachment trial in the Senate was more than willing to talk to reporters. In fact, he seemed eager to go and talk to reporters. That is of course, until they started asking him the tough questions like, are you going to allow witnesses at the trial? Are you going to call John Bolton to come tell us what he knows? And at that point, Ted Cruz kind of lost it for a moment, moment, but he regained his composure. Here’s what happened.

Ted Cruz:                      This afternoon was devastating for the House managers. For the first time in the entire proceeding, we have heard just the beginning of the serious evidence of corruption involving Burisma, the Ukrainian natural gas company that paid a Hunter Biden, Joe Biden’s son, $1 million a year.

So I want to stop right there. We’re going to get to more of that clip in just a second, but I want to stop right there because Ted, you were asked a very specific question by that reporter. You’re going to allow John Bolton to come and testify? And here you are going into this diatribe that was clearly well-rehearsed, like you clearly had practiced that. Even your mannerisms seemed scripted in that response. Well, let me tell you a little story that I just learned about Joe and Hunter Biden and Burisma. Okay, yeah dude, nobody, nobody asked you about that. They asked you a specific question. It was your job to answer that and instead you wanted to tell the story you wanted to tell, then you got mad at the reporter for interrupting you when you were already not answering his question. And later on after he went through this whole Hunter and Joe Biden and Burisma diatribe, he did eventually, I guess, you could call it, answer the reporter’s question. Here it is.

Let’s go ahead and clear something up real quick here, Ted. The question at hand, the legal question is not whether or not the president’s allowed to investigate corruption. That’s, that’s not what this is about at all. That’s what you would like it to be about because that’s an easy one to say, yeah, the president does have that power, but again, that’s not what we’re discussing and that’s not why he was impeached. He was impeached for the extortion part of it. Right? He could have picked up that telephone at any point throughout his presidency and said, hey, we seem to have a problem here. We think some United States citizens may have been involved in some criminal activity over there in Ukraine. How about you look into that? You know, we’ll look into it on our side. You look into it on your side and we’ll, we’ll come together once we both finish that. Have a great night. That, that could’ve happened at any point, Ted.

Republicans in the Senate who suddenly are so concerned about Joe and Hunter Biden’s corruption in Ukraine, y’all have controlled the Senate for years and years and years. Not once did you guys call for an investigation. So why are you suddenly so concerned about it now? Why wasn’t it a big deal a year ago? It had already happened. You guys clearly knew about it. So I would assume if you actually did care about it, you would’ve done something about it when you controled the White House, the Senate, the House of Representatives and the US Supreme Court. But you didn’t, you didn’t do that at all. Not even close to it. That’s not what this is about. This is not about Joe Biden. It’s not about Hunter Biden. It’s not about Burisma. It’s not about that prosecutor that got fired in Ukraine. It’s about Donald Trump with, intentionally withholding aid to Ukraine that Congress had passed because he wanted them to announce an investigation into the Bidens. That is illegal, no matter which way you slice it. Congress appropriated the money. The president, the only thing he could do was barter over the delivery of that money, but not for political gain, which according to people who worked with Trump is exactly what he did.