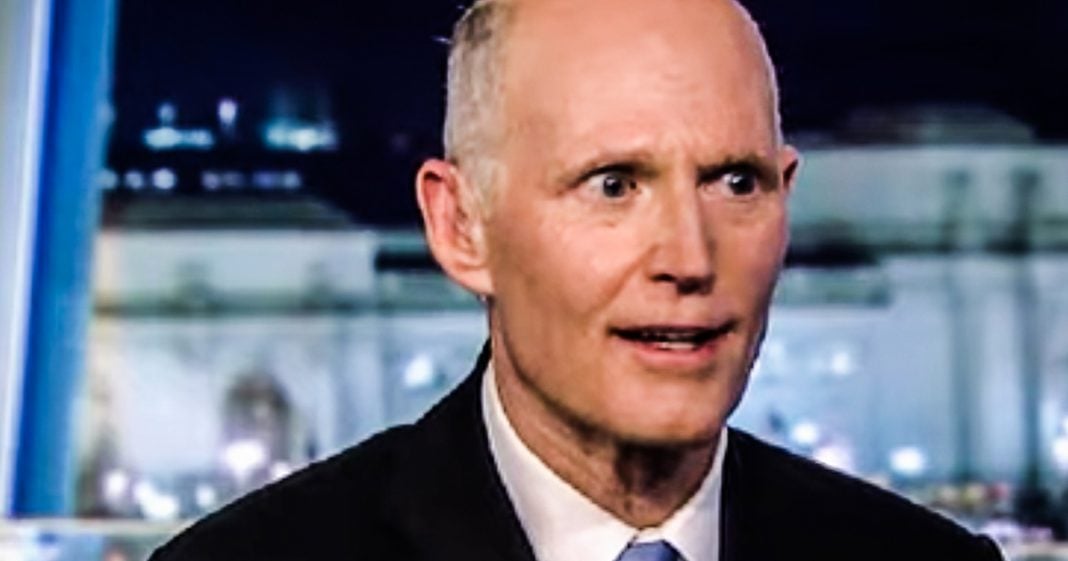 Senator Rick Scott appeared on Fox News with Bret Baier on Tuesday evening to discuss impeachment, and he looked like a deer in headlights throughout most of the questioning. Scott was unable to put his thoughts together, he stuttered and stammered throughout the entire clip, and sounded like he had no idea what he was talking about. Ring of Fire’s Farron Cousins explains why Scott was panicking so much during this interview.

Former Florida governor/new Republican Senator Rick Scott, has pretty much made a career of being on the hot seat. Right? Voters here in Florida didn’t really like him, although for some reason they voted him in for two terms. He was investigated because his company pulled off the largest Medicare fraud in the history of the United States. And most of us have all seen that interrogation video of Rick Scott where he didn’t falter. He was totally cool when he pled the fifth amendment more than 70 times so that he wouldn’t go to prison for the crimes his company committed. And he was cool as a cucumber. So it takes a lot to knock this guy off his game. And we saw exactly what it took last night on Bret Baier’s Fox news program. And here it is.

Rick Scott:                    I mean, there’s no perfect calls, but did, did the prison do something wrong? Did he, did he, I mean, did he say, you’ve got to do an investigation or I won’t give you money? No, he didn’t do that. And there’s no evidence. There’s nobody. There’s nobody that they had that has that, they provide testimony on that said that.

Bret Baier:                    I’m just asking you what they’re saying. I mean, that’s, there’s saying here is John Bolton, and he’s going to say this, allegedly, and what if he does say that? You’re saying there isn’t a witness, but he could be that witness. Now you have former White House chief of staff, John Kelly, saying I believe John Bolton. I mean, it seems like this snowball and you say you’re confident that witnesses won’t be.

Again, I lived through eight years of Rick Scott as my governor down here in the state of Florida. I’ve, I’ve watched the deposition video from start to finish. Again, guy was unflappable, could not draw him off his game, could not make him look scared or confused. And Bret Baier asking a simple question of, hey, what do you think about John Bolton? Right? I mean, there’s some crazy allegations. And suddenly Rick Scott turns into a cartoon character with, blah, blah, blah, maybe, de de de de de, Democrats did. So, blah, blah, blah. I don’t know, maybe. Bleh. I have never seen Rick Scott do that. And of course he kind of recovers down there at the end and, you know, makes it sound like, you know, I mean, who can really tell what life holds for all of us and maybe the Democrats, they should have done this. They tried Rick, they tried. Your boss, and I’m not talking about the people of Florida who are supposed to be your boss.

I’m talking about your boss that you actually report to, Donald Trump. He’s the one who wouldn’t let John Bolton come and testify. Now, the Democrats, as I’ve repeatedly said, should have waited it out. Courts would have eventually sided with them, but it is what it is. But you can’t say that what John Bolton is saying now isn’t important. You can’t pretend like this is somehow the fault of the Democrats. This is something you have to deal with and if you don’t deal with it right now in this impeachment trial, then I can promise you based on the responses that you got on Twitter yesterday from this insane clip that you for some reason decided to tweet out because you thought it made you look good. Yeah, answer for it now in the Senate or you’re going to answer for it with us in another four years. We’re not going to forget this. We’re just going to add it onto the long list of reasons why Rick Scott should probably be in a penitentiary instead of serving in the Senate.