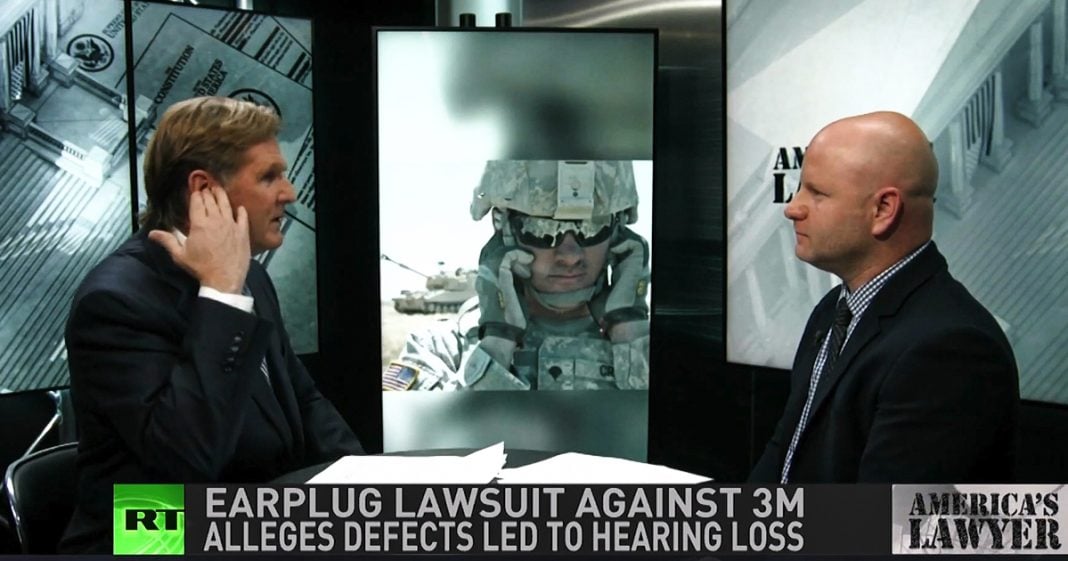 Via America’s Lawyer: Mike Papantonio and Trial Magazine Executive Editor Farron Cousins take a look at defense contractor 3M that scammed the federal government and sold ear plugs that have left countless U.S. troops with permanent hearing damage. Then, legal journalist Mollye Barrows joins Mike Papantonio to talk about a new documentary about disgraced Hollywood film producer Harvey Weinstein, which highlights how the Media was enabling and protecting him.

Mike Papantonio:             For centuries, defense contractors have been ripping off the federal government by providing shoddy work and defective products. The latest example of this is the ear plugs sold by the company 3M that’s left US soldiers with permanent hearing problems. 3M again, you know, so in a nutshell, the government says we want a product that will protect the hearing of our soldiers from this, you know, the AK 47 sounds, bomb sounds, heavy equipment sounds, because so many soldiers are coming back with hearing loss. It’s the number one disability claim out of people that are coming back from, from places like Iraq and Afghanistan. So 3M says, we got just the thing for ya. Let, let’s sell it to you. Now, what, as you look at this, doesn’t this sounds just like all the other cases we see where a contractor tells the government, we’re going to deliver this for you and its junk?

Farron Cousins:                  Exactly. 3M did not do what they were supposed to do, did not deliver a product that was actually going to help soldiers. They knew according to, you know, a settlement they’ve already had actually with the government that their devices were not manufactured and designed properly to actually close off someone’s ear so that it would prevent these noises. So look, I mean the numbers here are absolutely startling. You’ve got veterans are 30 percent more likely than non-vets to have severe hearing impairment. Those who have served after 2001, they’re four times more likely to have military hearing loss. And as of 2014, we’ve got 933,000 vets receiving disability for hearing loss and 1.3 million receiving compensation for Tinnitus. And this is a, a ringing in the ear. And that’s what this lawsuit is about. It’s causing, causing this.

Mike Papantonio:             It’s so bad it, it actually interferes with their cognitive abilities. It’s not just something minor.

Farron Cousins:                  Right. 3M was the company that actually made C8 for DuPont. DuPont later bought it up, but 3M was making this chemical they knew was highly toxic. They knew could give people cancer.

Mike Papantonio:             The history is, and I’ll tell you this history because there’s so many 3M type of defective products, cases goes, but this, this particular story is, is on Netflix right now. It’s called The Devil We Know. It kind of gives you an idea of what the mentality of these companies really are. 3M developed C8, they sold it to DuPont. DuPont just absolutely poisoned seven, the drinking water of 70,000 people. Caused cancer and gastrointestinal disease all, of all kinds. But the point is it is a way of doing business that has started, it’s not recent. It’s, it’s you know, decades and decades. We’ve been seeing corporations saying, how far can we push the limits? On this, on this 3M case as the, on the hearing aid, the hearing loss aspect, I’m not sure it’s a case.

In other words, I’m not sure it’s something that somebody can go out and sue 3M for because there’s something called government contract defense and that is where the government said, this is what we want. The government, if anything, it’s a shame you can’t sue the government for it too because the government knew there were problems with the, with the, this item that was supposed to stop all these huge decibels from causing people to go deaf. They knew the problem. They did their own testing and they let it go on anyway. In other words, they said to 3M, you know, we know you got a defective product here, but we’re the US government and by golly, we’re going to go forward with it anyway. Well, I mean we see that happen in these government contract cases.

Farron Cousins:                  We do and the sickest part here is that, yes, 3M did settle a case with the DOJ, $9.1 million. So the DOJ gets some of their money back. 3M gets to keep manufacturing their products and keeps government contracts, but the soldiers, the people who use the product as is often the case, they’re the ones suffering. They likely couldn’t get anything out of this. And so it’s the same story no matter what company.

Mike Papantonio:             And, and the same story also, the cost shifts to taxpayers, right? Cause taxpayers have to pay for the disability for the product that was manufactured by a corporation that’s making billions that the government buys and says, you know, with a nod and a wink. Yeah, we’re okay with that. Sell it to us anyway. It’s the same story. Told over and over again. Again, I’m not sure this is a lawsuit. It might be. We’ll see as this thing develops. We’ll take a closer look at the contracts. Farron, thanks for joining me. These stories, I don’t think they’re stories that people hear except for shows like this.

Mike Papantonio:             A new documentary about disgraced Hollywood film producer Harvey Weinstein highlights not only his predatory behavior with young women, but also the people in the industry who enabled and protected him. You know, as I look at that picture, I’m going, really, this is, this is, this is the Casanova?

Mike Papantonio:             I mean, you walk into a room with this guy and unfortunately so many people did that. What’s the gist of this film?

Mollye Barrows:                Well, so there’s this new documentary of course that’s out talking about how basically Hollywood and the surrounding industry was just his hunting grounds and he was a legitimate predator. They interviewed some dozen women who essentially give the same story about how they, he promised them these amazing life changing career opportunities, but hey, you got to come talking about it, you know, at a meeting at my hotel and oh by the way, it’s up in my room. And then he forces himself on them and they’re either, they either acquiesced out of fear or physical fear for their safety or out of fear for being black balled or, you know, from the industry. So it’s a, a predatory pattern. But they also highlight a couple of other things about the system that essentially enabled him, whether it was at Miramax and you had a few employees that would step forward and say, sure, we saw it, we knew it had a whole environment of harassment, but we didn’t want to lose our jobs. So we didn’t say much to a couple of the employees at Miramax who did speak up and talk about the atmosphere and they did officially lodge his complaints.

Mike Papantonio:             The extension is that you had a corporate media, MSNBC, NBC, ABC, CBS. They wouldn’t tell these stories either.

Mike Papantonio:             And because of this, it’s almost a fraternity, this corrupt little fraternity that we’re going to protect our own. And he of course was at the top of his game, you know, with the Tarantino movies. And he was just absolutely on top of his game. And then so, so the, the media industry itself charmed themselves into saying, no, we don’t, we don’t really believe this. Well, they did believe it. A, they knew about it. They’ve been told all the stories. The people that were telling the stories were completely credible, but they said, we’re not going to do this kind of for the same reason they say to an advertiser, you know, we’re not going to tell the story that’s going to hurt you.

Mollye Barrows:                Yeah, and we saw it again and again, didn’t we? With other high-powered media figures, whether it was Roger Ailes, Charlie Rose or you just, you name it. They had other people around them that we’re protecting them from these allegations. But you know, as you and I have talked about before, as a reporter for many years in covering courts and crime and you did cover a lot of the same people and you did hear part of the whisper chain if you will, or the telephone game of who those people, allegations were behind the scenes that they were grabby or they shouldn’t be approached. Or where they had reputation for being offensive. But there was never anybody that would come on the record and give their name or you know. So that was what this film brought to light was that there were a general knowledge within the media that these accusations existed.

Mollye Barrows:                But there was a real resistance probably from people that were higher level and more empowered to really following up. Some of the reporters, boots on the ground, including this one guy for The New Yorker, Ken Auletta, talked about 2002 profile he did of Weinstein where he was unable to include any abuse allegations that he had partially confirmed, he’d found a victim, but she didn’t want him to use her name, and then of course Weinstein denied the allegation. So it’s easy for the editor to say, okay, well we’re not going to follow through with it. But that’s what I thought was so brilliant about Ronan Farrow’s piece when he broke his story in The New Yorker.

Mollye Barrows:                Yes, and they, and you know, when you have a person who, even if they don’t want you to use their name, if they’re willing to take other legal steps that would ensure that what they’re telling you is to the best of their knowledge true, there are ways to tell this story. And what I feel like is great about this film, Untouchable, is that they highlighted how there was so much acquiescence and gave specific examples, not just with Mr. Auletta, but other, other incidents where Weinstein openly yelled a nasty word at a reporter at a party and then grabbed her journalist boyfriend in a headlock and punched him on top of the head. There were pictures of it, but supposedly these reporters never saw the pictures and it was never published.

Mike Papantonio:             Now your, your daughter, your sister, your mother has got to confront this person before they can get a job. They got to walk into a room with this, this character.

Mollye Barrows:                That’s gonna be an interesting story for us to follow too. I think because so much of the #metoo movement is tied up into whether he’s held accountable in law, but as you know, those are sticky cases, if you will. They’re not always easy to prove, so he’s facing five criminal charges right now that stem from allegations in 2006 of basically forcing himself on a woman and then 2013 a rape accusation of a woman in a hotel room. So there have been petitions. I think another charge has been charged before this had been dropped. So these are the ones that are moving forward.