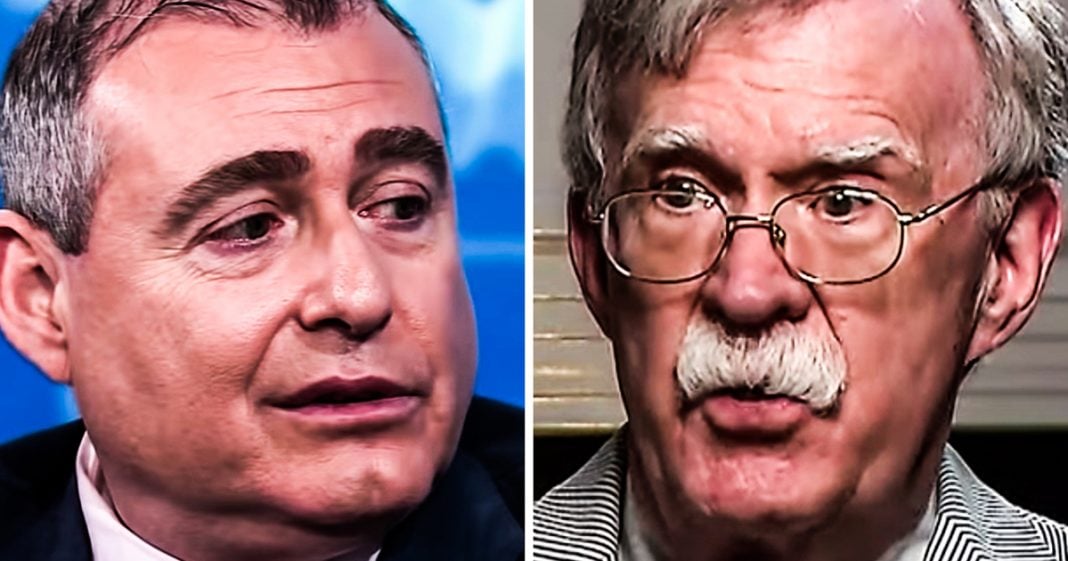 According to Republican senators, the vote to allow impeachment witnesses at the trial could take place as early as Friday. Reports have indicated that the 51 vote threshold for calling witnesses has been secured, which means that we could hear from people like John Bolton and Lev Parnas in the coming weeks. Ring of Fire’s Farron Cousins discusses this news and explains the possibilities.

Several Republican senators said yesterday to reporters that they expect a vote on Friday on whether or not to allow witnesses into the Senate impeachment trial. Now, most of them said Friday. Some of them said it could be as late as Saturday, but either way, they’re telling us by the end of this week, we’re going to know if we’re going to have witnesses show up at this impeachment trial. Just like every impeachment trial in the past has had. Further reports indicated that the 51 vote threshold in order to call witnesses had been reached. Apparently the Democrats have been reaching out to some Republicans, talking to them, getting their input on it and trying to secure their vote. Now, that part of the story I’m a little bit more skeptical about, right? I mean, we have seen Mitt Romney even earlier this morning, coming out and saying like, oh, I think it’s very important, you know, that we, that we hear from these witnesses.

I would like to hear from John Bolton. I think it strengthens the case for calling witnesses. Actually, that was Susan Collins who said that yet. Neither one of them has said, yes, we should hear from witnesses and I’m going to vote to make sure that we should. Really either part of that sentence I just said, none of them have said. So I’m not going to get my hopes up about this vote. I’m not going to get my hopes up that suddenly after all their hand ringing and well, golly, I’d love to hear from this fellow, but I just don’t know if we should. No, either yes or no, and you can tell the press right now. What are you afraid of? As for Collins, you’re already losing your re-election bid because of this personality of yours, the oh wow, this thing is so horribly wrong and bad, but I’m going to vote for it anyway, but I’m gosh darn going to feel horrible about it.

Nobody’s buying it anymore, Susan Collins, there is a flood of out of state money coming into Maine to support your competitor because people across this country are so dang sick of you. Mitt Romney doesn’t have to deal with that yet, but he will in the future. Either way, depending on either one of these two people to be the ones who come in and vote to allow impeachment witnesses, I think that’s a little farfetched. I really do. Based on what we’ve seen from them, based on the way that they’re phrasing their sentences here, I don’t buy into it. I honest to God, don’t. I would love for them to prove me wrong on Friday or Saturday or whenever this vote takes place. I would love nothing more than to be wrong about everything I’ve said about impeachment, about how it’s not going to result in anything and how the Democrats kind of screwed the pooch here and how Republicans aren’t going to break with the president.

I would love to be wrong about every single bit of it. But based on everything we have seen, based on everything these Republicans have said and done, I currently have zero faith that even one of them is willing to do the right thing and allow these witnesses to come to the impeachment trial. But let’s, let’s get, you know, into fantasy world for a second. Let’s assume that they do this. That they do break with the Republicans and they do allow these witnesses to come in. Okay. So then what? Well then we probably get to hear from John Bolton. Hopefully would get to hear from Lev Parnas because I’m telling you folks, as big as the bombshell is that Bolton dropped the other day, we already knew that. What we don’t know is everything that happened with Lev Parnas. That’s the guy I think the public needs to hear from.

Now at this point we have heard from John Bolton, yes, it’s not on the record and it needs to be and Bolton does need to show up. Parnas is the guy we all need to hear from because Bolton’s experience’s really only tie in president Trump and Mike Pompeo. Parnas on the other hand ties in Trump, Pence, Pompeo, Giuliani, Devin Nunes and yes, even Donnie Trump jr was that their recent little meeting that was released on that videotape. So, yeah, I think Parnas is the bigger fish here because he’s the guy who definitely has something to lose if he doesn’t cooperate. So that’s what I would like to see happen. But again, not going to be optimistic about it, but I would love to be proven wrong about that.