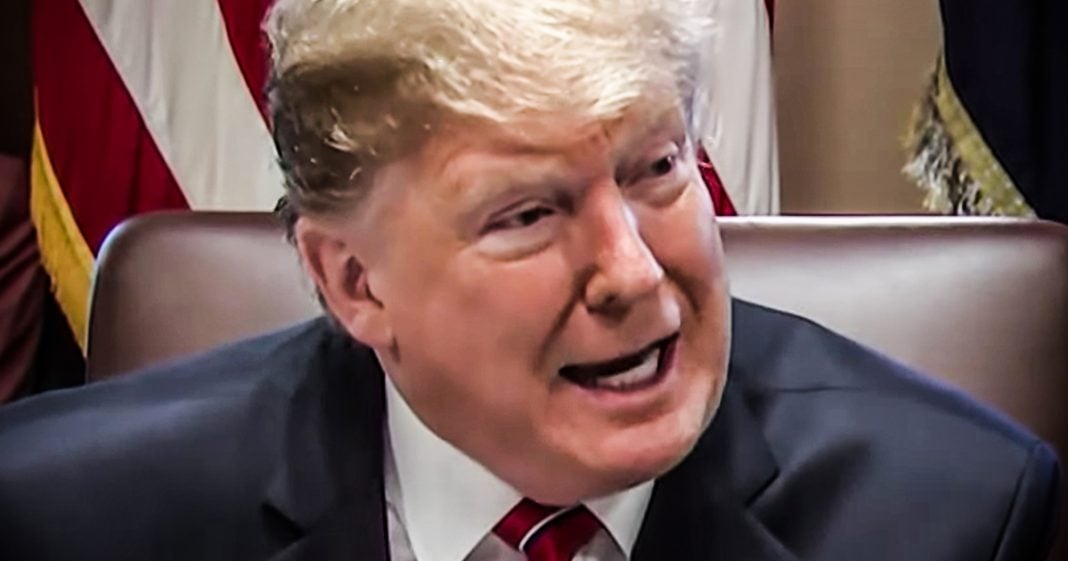 The Supreme Court ruled this week that the Trump administration can continue to ban immigrants and refugees from entering this country if they are poor and could end up public assistance. The ruling is only temporary, allowing the current practice to continue while the case itself works its way through the courts, but this is still a huge victory for the President and his bigoted policies. Ring of Fire’s Farron Cousins discusses this.

Yesterday, the Supreme Court handed Donald Trump a huge victory by allowing his public charge rule to go into effect while that particular policy is still working its way through the lower courts. Here’s what happened. Back in August, Donald Trump, his administration decided they were going to change what public charge meant, and for those who aren’t familiar with it, public charge means somebody who may end up becoming, not necessarily a ward of the state, but anybody who may have to rely on federal assistance. And Donald Trump didn’t want those people coming into the United States. So we had Homeland Security rewrite the definition of public charge because it was very vague the way it was already written. And in the past it had only included people who would rely on cash benefits. Trump had them rewrite it to where it was not just cash benefits, but anybody who would rely on any type of federal assistance, we want the right to deny you entry into the United States.

Department of Homeland Security complied and immediately several different States and a bunch of immigrants rights activists and groups filed a lawsuit against it because this was very clearly discrimination and there was no real way to actually be able to tell 100% whether or not a human being would end up needing federal assistance. And the Supreme Court yesterday said, you know what? We’re going to let this rule stay in place. Meaning you can block somebody from coming into this country if you think they’re going to need federal assistance, and maybe as it works its way through the courts, maybe it’ll get overturned. Maybe something will happen with it, or maybe that’s just now the law of the land. We’ll have to wait and find out, the Supreme Court says, but until then, go ahead and deny these people entry into our country.

This is very similar to Donald Trump’s Muslim ban. It has its roots in bigotry. He’s not trying to keep out all the immigrants or all the people traveling to this country or all the refugees. Just the ones who are, you know, poor. This is economic bigotry, is what this is. And he knows that the people who might want to come into this country who maybe don’t have much money, they’re not the people that look like me. They’re not the people that look like him. They’re the people whose skin is a little bit darker, whose language is a little bit different. Those are the people that Donald Trump is targeting with this. Just like the Muslim ban. He said, oh no, it’s just a travel ban for people from these countries because, you know, there’s bad people in these countries. No, you were trying to keep out a certain group of people and that’s exactly what you’re trying to do with this public charge rule that the SCOTUS just green-lighted for you yesterday.

It all comes back down to bigotry. Donald Trump hates poor people. But again, as I pointed out, you have no real way of knowing whether or not somebody is going to in fact be a public charge or for how long they could be a public charge. Because yes, an immigrant could come over here with absolutely nothing, but they could immediately find a job. You know, depending on their skill level, that job may pay well, may pay just decent enough for them to be able to get by without needing public assistance. You cannot determine that just by looking at somebody and looking at their bank account. I’m sorry you can’t, you can’t predict it. Just like you can’t predict a, you know, let’s say a young woman’s from Slovakia coming over here to the United States. She didn’t have a penny in her pocket. Right? Had no talent whatsoever. She would have been ruled a public charge back then because she had nothing. She had no skills. Her only skill was that she had a pretty face.

And then later on that she married Donald Trump. Back then, that would have been considered a public charge because she had nothing. So by Trump’s own rules, many of them actually, not just this one, his own wife wouldn’t have been able to come over here to this country, likely. But those aren’t the people he’s trying to keep out. As I mentioned, he’s trying to keep out the people whose skin is a few shades darker than his own. That is what this is about and every ban on immigrants or refugees or anyone else that Trump puts in place always comes back down to race.