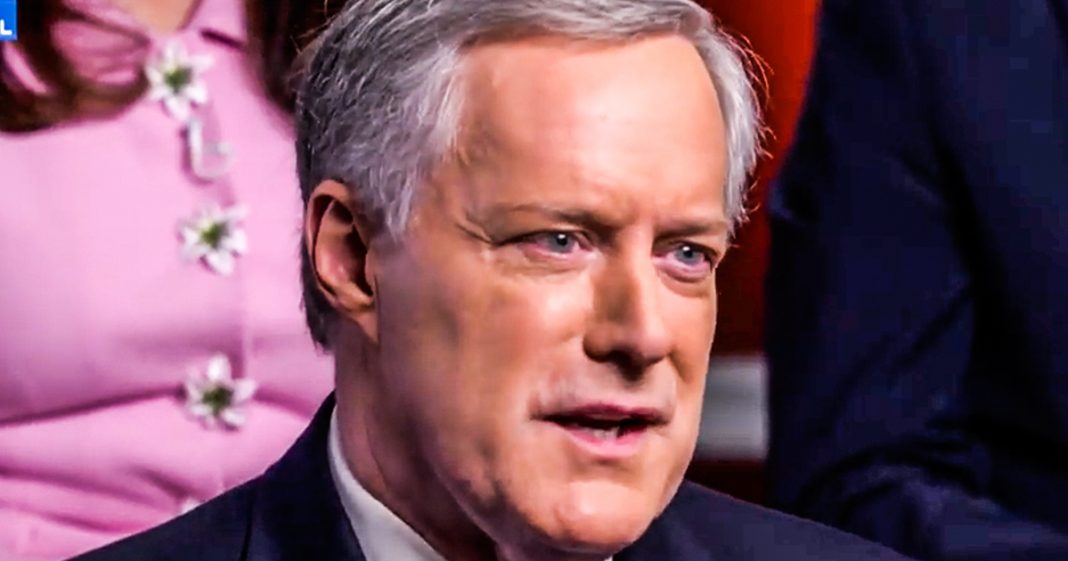 Republican Representative Mark Meadows issued an ominous warning to centrist Republicans in the Senate on Monday evening: If you go against Donald Trump, you will face political repercussions. These “repercussions” could come in the form of either attacks from the President, or backlash by voters. While the attacks from Trump are certain, the backlash from the voters part isn’t as clear as Meadows would like it to be, as Ring of Fire’s Farron Cousins explains.

Last night, CBS news aired an interview with Republican representative Mark Meadows, who is also a part of Donald Trump’s trial team for the impeachment in the Senate, and Mark Meadows kind of laid out what’s going to happen to any Republican in that Senate who doesn’t fall in line with Donald Trump. Here’s what Mr. Meadows had to say. I mean, listen, I don’t want to speak for my Senate colleagues, but there are always political repercussions for every vote you take. There is no vote that is higher profile than this. Political repercussion. You know, if I didn’t know any better Mr. Meadows, I would swear that’s a bit of a threat because that is exactly what it is. You’re kind of putting it out there, just letting all those Republicans know. People like Mitt Romney and Susan Collins and possibly even Murkowski, hey, if you guys vote in a way that we don’t like, it’s just, it’s going to get really unpleasant for ya around these parts.

That’s basically what Meadows was saying. Now it’s not clear if Meadows means there’s going to be political ramifications back home, if you run the risk of losing re-election or if the president himself is just gonna make your life a living hell, we don’t know. But I think we can pretty much go ahead and guarantee that it’s mostly the Trump thing, right? We know for a fact, based on past history, if you vote against Donald Trump, especially on something as important as this, because you know Meadows is right and this is a super high profile vote. The biggest one these folks have ever taken, most of them. And, yeah, if you vote against the president or if you vote in favor of witnesses, you’re putting yourself on Donald Trump’s Twitter target list for the rest of your life and he will tweet about you for the rest of his life.

That’s just a fact of life. Deal with it. It means nothing. It’s just a tweet from a crazy old man. Let it go. As for the political ramifications back home, is this really going to hurt them? I mean, as we’ve said in the past, like Susan Collins is already facing a very tough re-election campaign because of how horrible she’s been because of her mealy mouth, kind of, I think I’m a centrist, but I’m actually a hardcore republicanism. Voters don’t like that and they want to get rid of her because of it. So if she were to actually vote against the president, the voters in her state would actually be happier and so she would actually stand a better chance at being reelected if she finally votes her conscience instead of her party. So I don’t know about the whole political repercussions thing back home. Right? Mitt Romney, he’s got what, four years before he has to worry about re-election.

He’s going to be fine. People in Utah will have forgetting about, or forgotten about this long, long ago, by the time this man even has to file for reelection. Murkowski, nobody pays attention to her anyway. Right? Alaska is very conservative. She’s pretty safe. Now some of these other folks, who knows, but you’re threatening them because you’re afraid. You’re afraid of what could come out if somebody like John Bolton or Lev Parnas were to take the stand in that Senate. You’re afraid of what’s going to be on the record at that point. You’re afraid that you, Mark Meadows, are the one who is going to face political repercussions because you have been so all in with Donald Trump that if these other Republicans say, yeah, let’s hear from witnesses, and we hear from those witnesses and they tell us what we think they’re going to tell us. Then your the one that looks like a jackass, not the Republicans who voted to hear the witnesses.