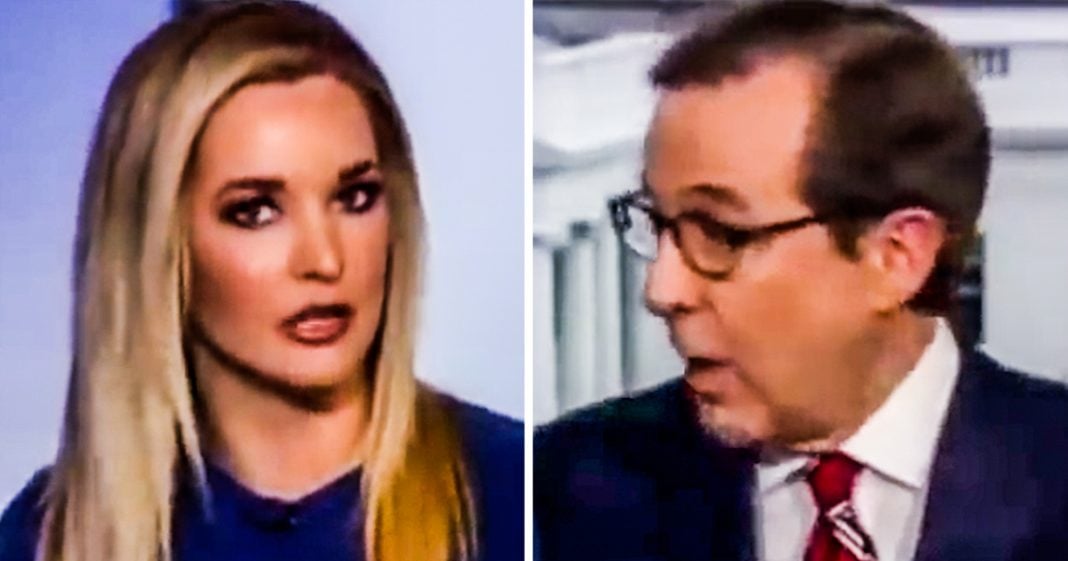 Fox News host Chris Wallace isn’t putting up with lying anymore, and he tore into a guest on his Monday program who was lying about the Trump impeachment trial. The guest, conservative pundit Katie Pavlich, tried to claim that the House failed to do their due diligence, unlike in the Clinton impeachment, to which Wallace snapped at her to “get your facts straight” and then explained what actually happened. Ring of Fire’s Farron Cousins discusses this.

Republicans on Fox news are having a bit of a hard time trying to make sense of this entire impeachment trial happening in the Senate, especially in the wake of all of the new news that’s come out that’s technically not even a part of the impeachment trial, and that is exactly what calls tempers to flare. Yesterday on Fox news, when Fox news host Chris Wallace appeared to lose it, at least temporarily against conservative contributor. Katie Pavlich. Here it is,

Katie Pavlich:                Okay. Let’s talk about some of the facts here, Chris. The point is that all of the information that the grand jury and the Clinton investigation and all of the witnesses that the house wanted to call that the justice department called in the Clinton case were done before the articles are voted on and put over to the Senate. That is not what has happened here. The house voted on incomplete information and gave it to the Senate and now they’re saying the Senate should call additional witnesses who have not been called before and who are not part of the house evidence that…

Katie Pavlich:                I’m not taking a side, Chris, I’m not saying Bolton should or should not testify. I am simply talking about what senators are saying and whether they should go with the process.

So what really set a Chris Wallace off right there is the fact that Pavlich was claiming that, Oh no, during the Clinton impeachment we had all these witnesses that came into the house and they gave their testimony and then they were the ones who went and testified in the Senate impeachment trial and Chris Wallace, who actually knows what happened back then, decided to go ahead and correct her and say, first of all, get facts straight. Which I loved. Uh, but he explains to her that Hey, there was a special prosecutor during that time, kind of like Robert Mueller. We didn’t have the house necessarily going through and having to do all of these investigations because it was launched by a different group. The department of justice through a special prosecutor then turned over to the house. In this particular instance with the Trump impeachment for the Ukraine extortion pro plot, the justice department refused to do anything about it.

So the whistleblower complaint that had been submitted to the DOJ instead went to the house of representatives for them to do something because the department of justice said, thanks, but no thanks. We’re not interested in investigating our guy Katie Pavlich apparently did not understand that, didn’t know how all of that worked and really isn’t too familiar with the entire process happening in the Senate and previously in the house. So Chris Wallace was very quick to go ahead and let her know that that’s not how things work, nor is it how things have historically worked in past impeachments. But here’s the thing, [inaudible] was doing the typical conservative thing that we’re seeing a lot of them do right now. She doesn’t know how to react to these new Bolton allegations. So she’s trying to go out there and misdirect us a little bit and say, well, if they were really that explosive, then why didn’t Bolton go and testify to the house?

FarLikely because Katie, the white house wouldn’t let him. They exerted executive privilege over these witnesses that the Democrats had in fact subpoenaed. And the Democrats didn’t feel unfortunately like waiting for the lengthy court battles, which I personally feel they should have waited for. So they decided whatever, we don’t necessarily need it, we’ll move on and maybe the Senator will call him, which we’ll find out, I guess at some point in the very near future. But there is no defense of what’s happening with this trial right now. Republicans are flailing, they’re acting like they’re winning.

Democrats have made some pretty solid points, but overall really hasn’t moved the meter very much at all with the public. The Bolton, uh, disclosures might, we’ll have to wait a couple of days for those poll numbers to come out. But overall, Republicans are starting to sense the walls closing it. They haven’t closed in yet, but they see what’s happening. They see all this new information. They see the fact that the president’s lawyers, uh, pretty much all a bunch of scumbags at this point with all the news stories breaking around those folks. So yeah, kind of hard to come up with a cogent argument when the president and his lawyers are embroiled in so many different scandals.