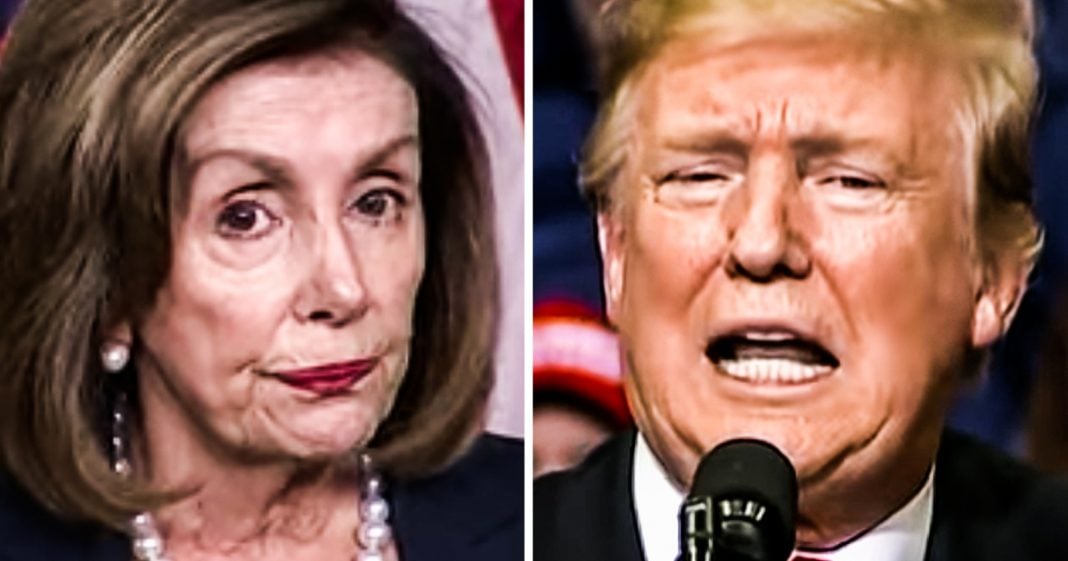 The impeachment may not have ended Trump’s presidency, but it has certainly weakened him and given the Democrats in Congress a new sense of purpose. Nancy Pelosi has announced that the House is going to work on legislation to repeal Donald Trump’s travel ban, a move that shows that the Democrats aren’t going to sit back and take abuse from the Right any longer. Ring of Fire’s Farron Cousins discusses this.

Over the last few years, I’ve been very, very hard on the Democratic party and I feel rightfully so, right? We have seen all too often the Democratic party doesn’t learn the lessons of the past. They’re not willing to actually go to the mat and fight back against Republicans. They just had lost their spine and this happened all the way back, really, during Obama’s first term when they refused to prosecute the war criminals of the Bush administration and tried to cooperate with the Republican minorities in the House and Senate on the Bush tax cuts and let those kind of go on a lot longer than they should have. So yeah, the Democratic party has had a spine problem, but I am pleased to report that it appears, right now, that that spine problem the Democrats had might actually be clearing up. And here’s why I think that. Yesterday, Nancy Pelosi announced that the House of Representatives is going to start drafting legislation, led by representative Judy Chu of California, drafting legislation to overturn Donald Trump’s Muslim ban.

Now, yes, the Democrats have had the majority in the House of Representatives for over a year. Now, they could have tried to overturn this travel ban through legislation at any point since last January, but they’ve decided now’s the time and there’s a reason they’ve decided now’s the time. Not just because last week Donald Trump announced that he was going to be adding more countries to it and reports have indicated that those countries are going to be Belarus, Burma, Nigeria, Sudan, Tanzania, and a few others. Now, the reason they’re trying to strike now is because the president is weakened. Impeachment may not have removed him from office, and in fact, the trial’s still going, so who knows what’s going to happen other than the fact that we all know what’s going to happen. But the Democrats sense a weakness in Donald Trump right now, and that is why they’re striking now.

The president is weakened. The public has turned against him. Let’s go after one of his most disgusting and bigoted policies possible through legislation. That is a smart move and that shows that the Democrats, at least to a certain extent, have a little bit of backbone now. And yeah, they had to find their backbone by going after a weakened president, but at this point we’ll take it, right? Every small victory is still a victory and that’s what we’re looking at with this. Now, is this legislation going to be successful in the House? Most likely. Is it going to go anywhere after that? Definitely not. But it shows that the Democrats aren’t going to sit there and play nice and think, oh, well we can’t get things done, so we’re not going to try. Because we’ve heard that a lot during the presidential campaign, haven’t we? Green new deal, too expensive. Can’t do it. Let’s not try.

Medicare For All, way too much money. Even though it technically saves us money. But anyway, too ambitious. Let’s not even try. Debt-free college, too expensive. Let’s not try. A year ago it would seem that overturning Donald Trump’s Muslim ban would be something the Democrats would have thought was never going to happen. So let’s not try. But now today, even though they know it’s not going to happen, they’re still going to try. That gives me hope, and I’m not the kind of guy who’s filled with hope, especially with regards to the Democrats doing the right thing most of the time, but I am now. This policy needs to end. This policy is rooted in bigotry, and I applaud the Democrats for finally finding that backbone and saying, enough is enough, we’re taking this on now.