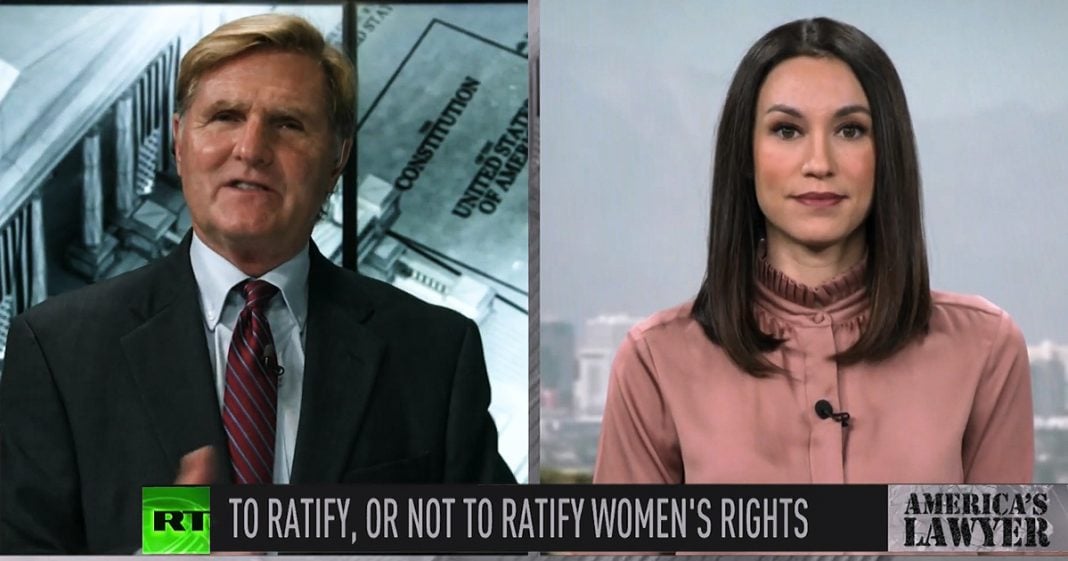 Via America’s Lawyer: RT correspondent Brigida Santos joins Mike Papantonio to talk about how President Trump has sent ratification of the Equal Protection Act almost back to square one, as women still remain unprotected under the Constitution almost a hundred years after the amendment was first proposed.

Mike Papantonio:             The Trump administration says it’s too late to ratify a proposed amendment to the US constitution that would guarantee women equal rights. It’s been nearly a hundred years since the equal rights amendment was first proposed and this is expected to finally be adopted by 38 States needed for federal ratification, but now it looks like the fight may go way back to square one. RTs Brigida Santos has the story today from Los Angeles. Brigida, tell me about the history of the ERA. Let’s begin there. People forget, it’s been a long road to getting three fourths of the States to even adopt it, but that’s kind of where we are. How about bringing us up to speed on that?

Brigida Santos:                   Sure. The equal rights amendment was first proposed in 1923 by suffragist Alice Paul. Now, back then it was known as the Mott amendment, but it didn’t gain traction until both houses of Congress approved it in 1972. For it to take effect at the federal level, three quarters of the States had to ratify it within seven years, but that deadline was later extended to 1982 when the ERA was only three States shy of federal ratification. Now, in recent years with the rise of the me too movement and the time’s up movement, there’s been a renewed interest in the ERA and since 2017 Nevada and Illinois, and Illinois have ratified the amendment, and right now Virginia is preparing to do the same thing, which would give the amendment enough support for federal adoption. But as you said, the Trump administration is now saying that it’s too late due to the passage of that ratification deadline 38 years ago.

Brigida Santos:                   In 1939 the Supreme Court said that this is a question for Congress to answer, but the problem is Congress can’t seem to agree. Back in November, the Democrat controlled House of course approved a measure that would retroactively remove that deadline, but the Trump administration says that Congress may not revive a proposed amendment after a deadline has expired. Republicans say if the American people want to adopt to the ERA as part of the constitution, then Congress should propose the amendment and repeat the entire process of getting enough States to ratify it all over again. So we really still don’t have a definitive answer on this.

Mike Papantonio:             Yeah. First of all, haven’t most of the States that ratified this already put something in place statutorily are constitutionally in their own States? That’s the first part of it. And why is there still a debate about the equal rights amendment at all? I mean, aren’t we living in a time where, I mean, we bring lawsuits all the time for rape, for a, gender discrimination. I mean that’s as common as it can be and has been common for decades now. Has had, what is supporters and opponents of the bill say about that idea whether or not we’ve already adjusted state by state to this problem? What’s your take on that?

Brigida Santos:                   This really seems to be a partisan divide, again. Now supporters of the amendment say that it’s 2020 and women’s rights are still not explicitly recognized in the US constitution. Even though the equal protection clause of the 14th amendment prohibits States from denying any person equal protection under the law. Opponents of the, of the amendment claim that the broad language of the word sex can be used to impose same sexness and have radical effects like forcing women to be drafted into combat even though the US doesn’t draft people into the military anymore. And then it can be used to pull funding from women’s shelters. So this does seem to be a bit of a partisan issue.

Mike Papantonio:             Well, I can tell you as a practical matter, when, when a lawsuit is brought, when there has been some type of problem as far as equal protection issues, that there’s enough already to work with. And I think, I, I, it sounds to me like they just want it solidified in the federal constitution for, for what reason? It’s not totally clear because most of the relief that anybody would want now is already, it’s either codified in statute, state by state, or there’s the right to bring the case under the federal constitution when we talk about any person. And so, I don’t know, it might be a, it might be an important fight. We’ll see as it develops. But right now, the statute of limitation issue seems to be the fight. And if I’m reading it like I think, unfortunately for the, the proponents of it, the, the, the department of, of, well, Trump administration may have a pretty strong stand on that. Anyway, Brigida, thank you. We’ll do an update as, as this develops. Thanks a lot. Bye bye.