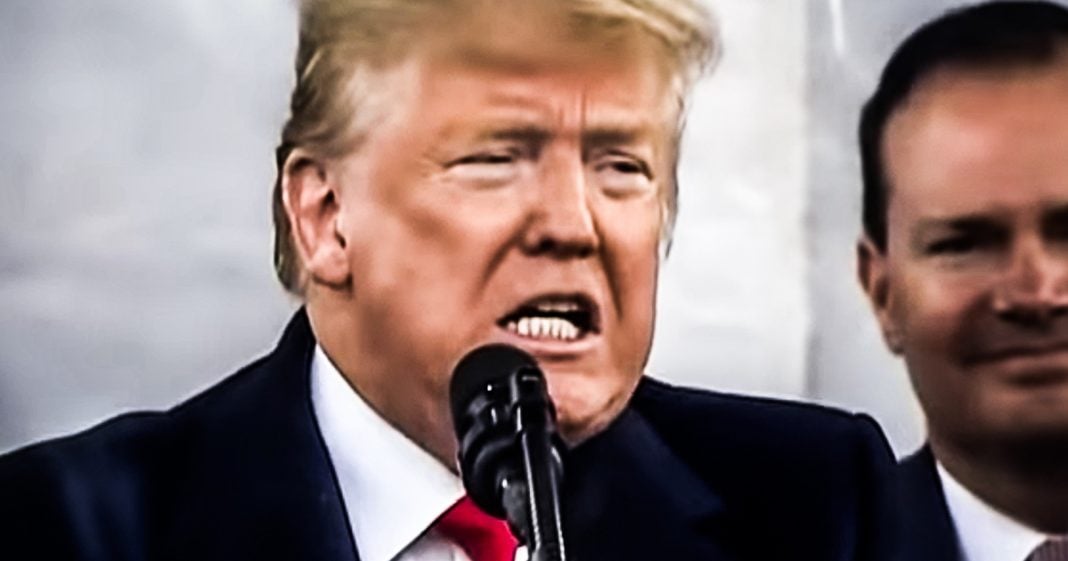 Donald Trump apparently lost what little bit of his mind he had left this past weekend, and he put it all out there on Twitter for us to observe. In addition to threatening Rep. Adam Schiff by saying that Schiff will pay a price, the president launched multiple different tirades against individuals and organizations that he believes have wronged him. Ring of Fire’s Farron Cousins explains what happened.

Donald Trump was hit with a barrage of really, really bad news this past weekend, further implicating him in criminal activity, and in case you thought Donald Trump was handling it all in stride, might I basically direct you to Donald Trump’s Twitter feed. On Sunday, the president appeared to lose what little bit of his mind he had left attacking everyone and every thing that he could possibly think of. One of the first tweets he sent out that day was apparently a threat against representative Adam Schiff. When Donald Trump tweeted out shifty, Adam Schiff is a corrupt politician and probably a very sick man. He has not paid the price yet for what he has done to our country. So Schiff later on in the day goes on some of the Sunday morning talk shows, talks about the tweet, said yes, it does appear to be a threat against me, because after all he says, you haven’t paid the price yet for what you’ve done to this country.

First of all, what has Adam Schiff done to this country? I mean, really, aside from basically running the impeachment thing right now, what, what has this guy done to or for the country? I mean, that’s a pretty bold claim and it’s putting a lot of credit on somebody who really doesn’t deserve all that much credit. Adam Schiff did, you know, push Russia gate on us for quite some time and, you know, that’s about it. You’d have to go deeper into his history to find anything really substantial that this guy has done again to or for this country. But again, this tweet, not necessarily focusing on Adam Schiff at the moment, this is about the president of the United States losing his mind in real time because that’s what we’re watching. We are watching a man’s descent into pure madness and those are the kinds of things that we probably need to take a little bit seriously.

This guy has control of nuclear weapons and there is nobody that could stop him if he suddenly just says, you know what? Launch them. Literally nothing we can do at that point. And he’s going more and more insane by the day. This wasn’t the only tweet though. This was not the only thing Donald Trump got super nutso about. A later tweet which reads like he filled it out using Madlibs read as follows, sleepy eyes, Chuck Todd of meet the corrupt press, just had a totally softball interview with con man Adam Schiff. Never even calling shifty out on his fraudulent statement to Congress where he made up all of the words of my conversation with the Ukrainian president. Fake news. Again, like with the random adjectives and descriptors there. This is president Madlibs. That’s what this man has become, because he’s so crazy. His Twitter feed is basically a window into his psyche right now, and it’s falling apart and we’re watching this. And the psychiatrist, the mental health professionals, the psychologist, they have been warning us about this for several years and all we’re doing is sitting here watching it happen in slow motion, wondering if anybody with any power is going to finally put an end to this madness.

Donald Trump is not well, and you can tell that just from his tweets alone. This is not the kind of person we should have in charge of this country. This is not the kind of person that should be in charge of the military or a nuclear arsenal. This should not be the kind of man that we have in charge of our trade policy because we’ve already seen the devastating effects of that. This is the kind of man that needs to be under evaluation, that probably needs to be on a couple of different medications and perhaps even have a live in nurse to make sure that his mental illness doesn’t devolve to the point where he is a threat to others or to himself.