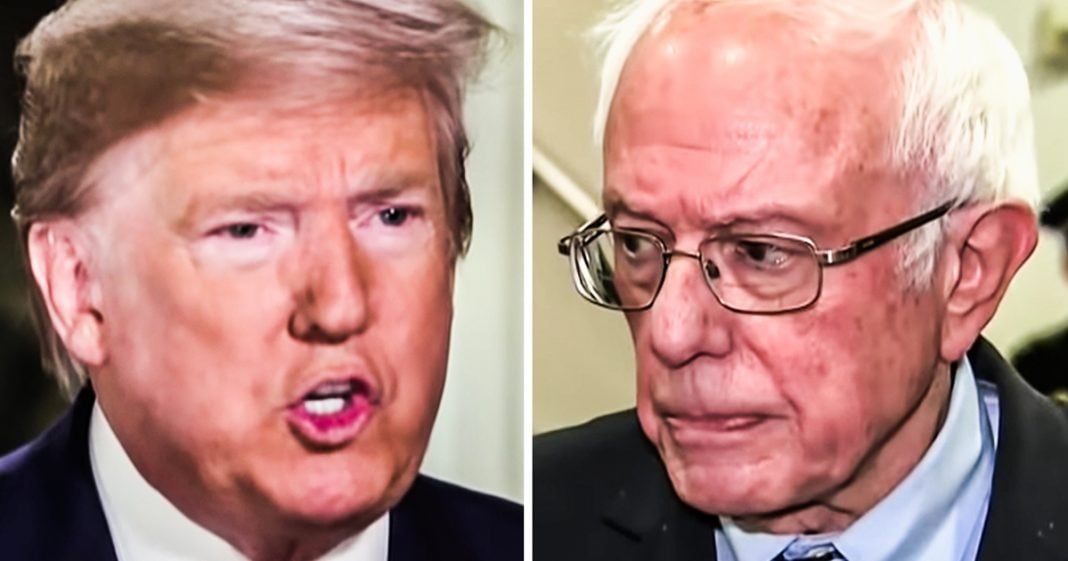 One of the videos released by Lev Parnas in recent days shows Donald Trump talking about how glad he is that Hillary Clinton didn’t pick Bernie Sanders as her running mate because Bernie would have been tough to beat. While he does make a few false claims about how much support from Bernie voters he received, he’s not wrong about losing to a Clinton/Sanders ticket. Ring of Fire’s Farron Cousins discusses this.

So another very important thing that we learned from that Lev Parnas tape that was released this past weekend, in addition to the fact that, yeah, Donald Trump very clearly was in on the whole scheme with Yovanovitch. You know, spying on her in the Ukraine and all that stuff. But anyway, there was another very important thing that we learned that is pertinent to the primaries and caucuses that are gonna start next week. And that is Donald Trump’s own admission in that tape that he is terrified of Bernie Sanders. That’s a big admission. In the tape, Donald Trump admits to the people in that room that he was terrified that Hillary Clinton was going to choose Bernie Sanders as a, as his running mate, as her running mate, excuse me. And that Bernie was the only person he was hoping she did not pick.

And he goes on to say that, oh, it’s because you know, Bernie’s a big trade guy and I’m a big trade guy and you know, oh blah, blah blah. That, that’s not what it is. What it is, is that Bernie Sanders has ideas. Bernie Sanders has good ideas that are going to help the majority of people in this country. Trump doesn’t have those. Hillary Clinton, believe it or not, folks, did not have very many of those and the ones that she did, she didn’t do a good enough job articulating. Bernie Sanders on the other hand, wasn’t about talking points. He was about plans and policies and that terrifies Donald Trump. He was able to pull Hillary Clinton down to his level. I think back to those debates, I know a lot of people on the left want to say, no, Hillary won because she stayed on topic. Well, she didn’t, folks. Go back and rewatch some of those. Watch how Donald Trump pulls her into his arguments and gets her off of her own. Tim Kaine, Hillary Clinton’s running mate, was weak as heck. So weak that I had to look up his name because I forgot who he was before I did this video. As I’m sure a lot of people also did. Tim Kaine was completely forgettable. What happened in his debate with Mike Pence? Nobody remembers.

But if you would have replaced him or instead of picking him, picked Bernie Sanders, Trump would have been afraid. Now, he also claimed in the tape that he got 20% of the Bernie Sanders supporters in the general election. That is not true. He got roughly 13% of the Bernie Sanders supporters in the general election, which is still basically half of the number of Clinton supporters that didn’t vote for Obama and instead voted for McCain in 2008. But Bernie scares Trump and he should, but that should also tell us a lot about these primaries and caucuses that we’ve got this year, folks. You want to put a candidate up there that scares Donald Trump? You want to put somebody up there that Trump doesn’t want to run against? Well, we know who it is now. It’s Bernie Sanders. Donald Trump is not afraid of Joe Biden. Donald Trump is not afraid of Elizabeth Warren. I think he is a little bit, but probably not as much as he is with Bernie. He’s certainly not afraid of Klobuchar or Buttigieg or anyone else, but Bernie Sanders scares him and Donald Trump is on tape now admitting that. We should probably use that to our advantage unless we want to screw up 2020 just like we did 2016.