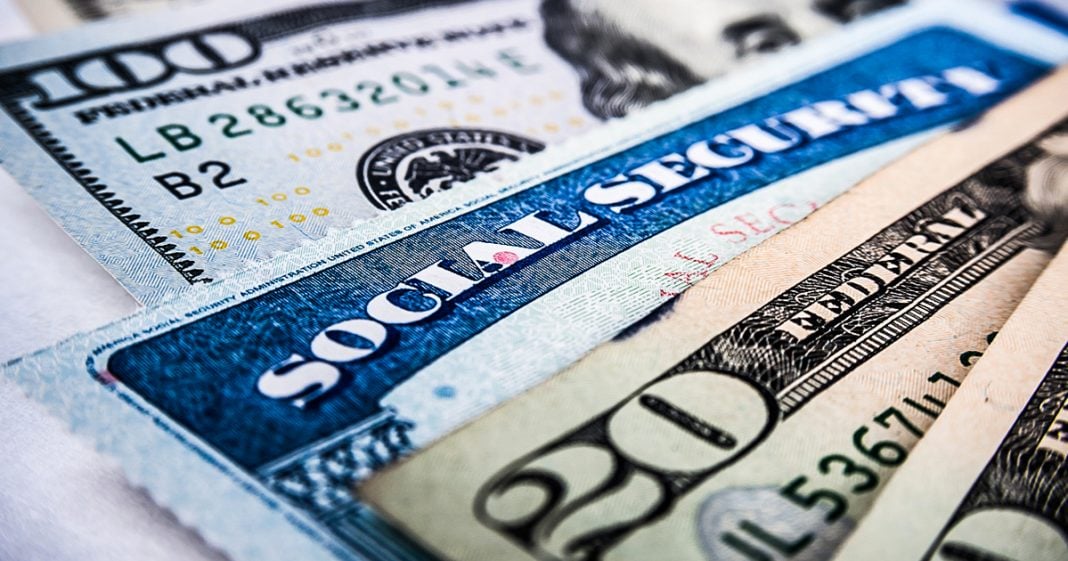 Donald Trump admitted this week in an interview that, if he gets reelected, he will be cutting Social Security, Medicaid, and Medicare. The President has already cut these programs by billions of dollars in the past few years, breaking a campaign promise. But these programs will be attacked like never before if this man gets another 4 years. Ring of Fire’s Farron Cousins discusses this.

Towards the end of this week, Donald Trump tweeted out that he would protect programs like Social Security, but the Democrats would destroy it. Now, this tweet was interesting for several reasons. One, because obviously we have the fight in the Democratic party right now. Old videos of Joe Biden’s saying he, you know, we got to cut entitlement programs. He’s getting gone after by the other Democrats. And so Donald Trump wanted to weigh in and say, hey, I’m going to protect Social Security. I promised you that in 2016, I’m promising you that again in 2020. But he sent this tweet after a story broke of an interview Trump gave with CNBC where he flat out admitted he’s going to cut Social Security along with Medicaid and Medicare if he gets reelected. Here’s the way that went down. The interviewer asked, you know, I have to ask, he says, are there, you know, potential cuts on the table in the future?

And Trump said, at some point they will be. We have tremendous growth. We’re going to have tremendous growth this next year, I, it’ll be toward the end of the year. The growth is going to be incredible and at the right time we will take a look at that. You know, that’s actually the easiest of all things if you look, because it’s such a, and then interviewer responds. If you’re willing? And then Trump says big percentage. Interviewer then says to do some of the things that you said you wouldn’t do in the past though in terms of Medicare? And then Trump says, well, we’re going, we’re going to look. So yes, even CNBC admitted after that, Trump says, Trump admits he’s going to cut Social Security, Medicare and Medicaid if he gets a second term. This is not surprising for multiple different reasons. One, we know Republicans always want to cut these entitlement programs as they call them.

It’s not entitlement programs. These are earned benefits. We’ve been paying into them our entire working lives and when we need them, they should be there for us because we’ve been paying for them since that first paycheck we ever got. But Paul Ryan wanted to do it. Republicans have been talking about doing it in non-election years. Mostly to pay for the tax cuts for the wealthy beause you know that budgets increased by $3 trillion or deficit, excuse me, increased by $3 trillion in Donald Trump’s three years in office. So we’re averaging an extra trillion a year in the deficit and they got to cut something. But it can’t be the tax cuts for the wealthy. So we’re going to see more cuts to Social Security, Medicaid and Medicare. And yes, I did just say more cuts. Because even though Donald Trump swore in 2016 he wasn’t going to touch these programs, he’s touched these programs, he’s cut these programs. In the 2020 budget alone, he had $25 billion in cuts for Social Security and more than $10 billion in cuts for Medicaid and Medicare.

So yes, he has already slashed tens of billions of dollars from these programs just in the past couple months. Show him saying or admitting that, oh, we’re going to look at it in the future. That’s not an idle threat. That’s not him just ho humming, I don’t know what’s happening. No, they know they’re going to do it because they’ve already been doing it. And if you ever needed a reason to make sure Donald Trump doesn’t win reelection this year, let this be it, along with any one of the other million things we’ve talked about this past week, but this is a big one. If he gets reelected, Social Security is about to take a big hit. So is Medicaid and so is Medicare. Big hits that could actually cripple these programs for the foreseeable future. These are your friends, your family members, your neighbors who rely on these programs. One third of elderly people in this country rely solely on Social Security as their only source of income. And this man with the Republican party behind him wants to cut it and leave the elderly with nothing, basically with nothing. This has to be stopped. And the only way to stop that is to vote this mad man out of the white house. And of course as many Republicans as possible out of the House and Senate.