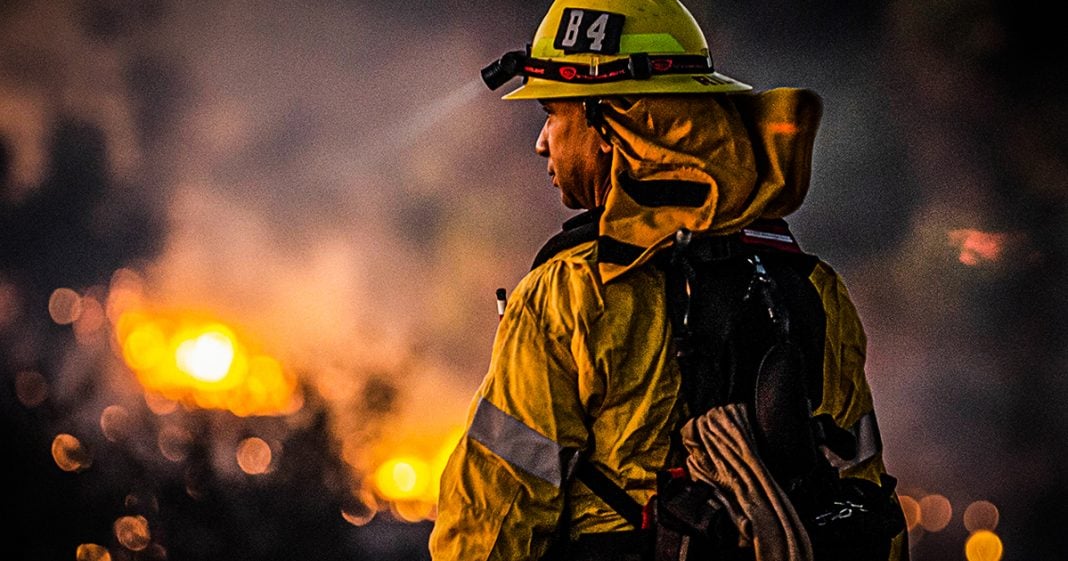 According to recently obtained emails, the Trump administration manipulated scientific data to claim that California’s wildfires were caused by having too many trees, instead of being attributable to climate change. This manipulation allowed the administration to open up more of the state to the logging industry, while doing absolutely nothing to prevent future wildfires. Ring of Fire’s Farron Cousins explains what’s happening.

Emails obtained recently by the Guardian reveal that the interior department, run by Donald Trump’s political appointees, tried to manipulate climate data in order to promote logging in the state of California. So let’s rewind the clock a little bit and figure out how all this started. Back in 2018 California was suffering from the devastating wildfires that were ravaging their state. Donald Trump at the time made several very stupid comments like, hey, if you went out and just raked the forest, you’re probably not going to have these wildfires because you just got stuff laying around. Let’s just rake it all up and boom, problem solved. He also told us that it’s the trees, all those dang trees in California catching on fire. It’s not the fault of, you know, companies like PG&E whose faulty equipment actually started the fire. No, no, no. It’s the tree’s fault. So we got to get rid of the trees.

So then over at the interior department on Trump’s order, you know, get rid of the trees. That’s what we need to do. They went through and decided to manipulate the data, is a fun word. I call it phoning up the data. So what they did was they estimated the carbon emissions from the wildfires that were taking place in California, and they grossly overestimated those, intentionally, according to their own emails, so that the emissions from the wildfires would appear to be higher than the burning of fossil fuels in the state of California. And then using those false numbers, they were then able to immediately start granting permits to logging companies to go in there and start clear-cutting California because their data at the interior department showed it’s not the fossil fuels, it’s not climate change drying everything out and sparking fires. It’s those darn trees getting in the way of everything.

And experts already told us, folks, it’s not the trees. In fact, in many instances, those trees actually slow down the fires a little bit. What is the problem is the undergrowth, the dead trees lying on the ground, that stuff needs to be cleared out, which takes a lot more than just a rake. Oh, and by the way, it’s the federal government’s job to come in there and do that with a little bit of help from the state. Most of it, yes, does fall under the federal government, which Donald Trump was controlling at the time. But they didn’t do it and he castigated the state for it, made fun of them, mocked them, tried to deny them disaster funds because his administration didn’t do their jobs. And then based on what we know now, they went into their offices, lied about the data, tried to tell us that trees were the problem and that’s where we are today.

Because as I mentioned immediately after this new report, or not new report, but at the time it was a new report from the interior department came out, Trump went ahead and said, go for it. Bring in the logging companies, start getting rid of those pesky fire prone trees. And that is exactly what they did. They’re destroying the environment in the state of California. They are doing nothing to prevent wildfires in the state. And in fact, they’re encouraging to promote more fires to start by getting rid of the trees that hold a lot of moisture and don’t burn as quickly. But the undergrowth, that stuff goes up in an instant and spreads like wildfire, actually. But Trump is going to leave all that because his buddies in the logging industry want to make more money and he’s banking on the fact that some of that money is going to come back to his campaign this year.