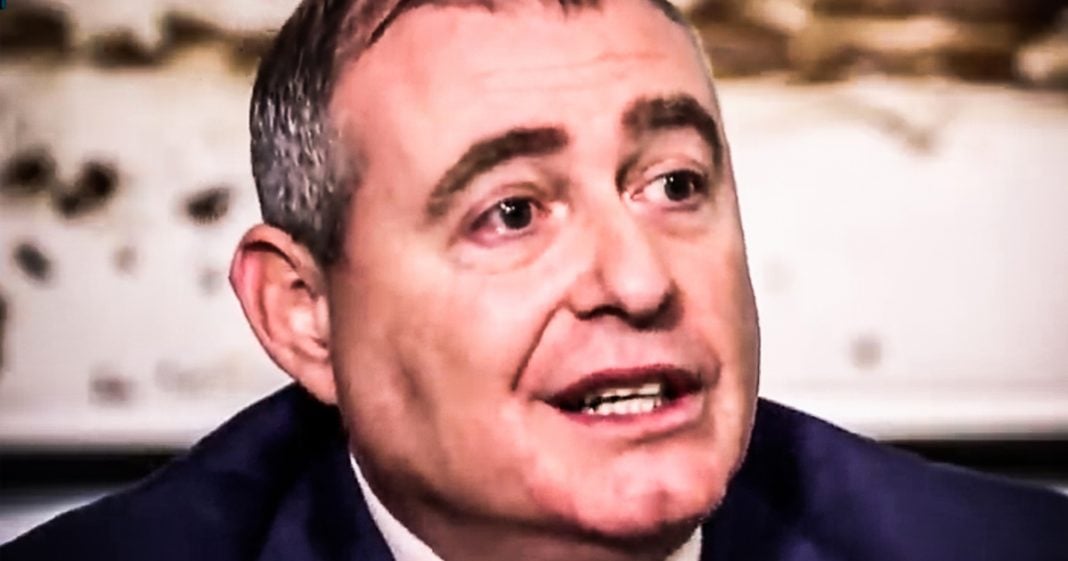 A treasure trove of audio recordings was released in the past few days by the lawyer for Lev Parnas, where we can clearly hear Donald Trump talking about Ukraine to Parnas, a man he claims he never met. This blows a massive hole in Trump’s impeachment defense, but Parnas isn’t finished yet. His lawyer now says that there are even more tapes of Trump that could easily be released in the near future. Ring of Fire’s Farron Cousins explains what’s happening.

John Bolton wasn’t the only one dropping some bombshells on the Trump administration this past weekend. Lev Parnas, through his attorney, Joseph Bondy, was also dropping a few of his own on Saturday. On Saturday, Bondy released a video, a 90 minute video from April, 2018 inside a private dining room in Trump hotel where Lev Parnas, Igor Fruman, Donald Trump and several others were sitting around talking about Ukraine. And at one point in this video, Lev Parnas who Donald Trump claims he never met, was speaking personally and directly with the president of the United States at this private little gathering. And Parnas told Donald Trump that Marie Yovanovitch, the former, at the time current, ambassador to Ukraine, was talking bad about him and talking about how he may end up being impeached. And Trump responded on the video saying the following, get rid of her, get her out tomorrow. I don’t care. Get her out tomorrow. Take her out. Do it.

So, this puts yet another hole in Donald Trump’s impeachment defense. Marie Yovanovitch didn’t do anything wrong. You know, they, they claimed they had gotten rid of her because she was corrupt, when in reality she was the one who was over there fighting corruption. We now know that it was in fact personal for Donald Trump to get rid of Marie Yovanovitch and it very likely that Parnas was tasked by the president with spying on her, which had already been revealed. So yes, we’re, we’re putting more and more and more and more of these pieces together. And as I’ve said repeatedly, it’s a damn shame that we didn’t get to put these pieces together before the House voted on impeachment. Seems like these kinds of things would have been, you know, rather important to that story. But nevertheless, there is nothing we can do about that at this point. We have this information now. We have the videos now.

Oh, and guess what? Here’s the best part, Mr. Bondy, the attorney for Lev Parnas, says that’s not the only video and maybe we’ll release more, maybe we won’t. Bondy’s hope is that the Senate will in fact call Lev Parnas to testify so that Parnas can tell these stories himself. But if he doesn’t, then get ready, because more and more videos are going to continue to come out and Bondy did say that the House of representatives did have most of these videos already. So, it’s likely they’ve seen this information. But that’s another part of the story here is like why? If you’ve seen it, House Democrats, why didn’t you release it? Why didn’t you tell us about this? Why didn’t you have Parnas come and testify? Why didn’t you wait for the court to clear him to testify?

You rushed it and you may have screwed yourselves over on that point because we know that the Senate is terrified of guys like Lev Parnas. They’re also terrified of guys like John Bolton. They do not want them to testify because these guys were in the heart of the scandal. They know everything that happened. They’ve told us everything that happened. Unfortunately they haven’t told us these kinds of things on the record and that’s what we have to change. We have to get these guys on the record. We have to get these videotapes admitted as new evidence in this impeachment trial, which can’t even happen because Republicans have already blocked that. This whole thing is a sham. So here is what could possibly happen from all this. If Parnas doesn’t testify, we’re going to get more and more and more of these videos and these videos, much like the one that came out this past weekend are going to further implicate Donald Trump in criminal activity. And if there is a slow leak of these, you know, if they don’t just release them all in a batch, but if they do one every couple of weeks it keeps the story alive. Not just the story of Trump being corrupt, but the story of the Republicans covering it all up with the impeachment sham of a trial.

That is what we have to keep fresh in the public’s mind. This trial is going to end, maybe in the next week and a half. But if these tapes keep coming out between now and the election and each time we learn a new bombshell, like we did here that, yeah, Trump did the thing we thought he did, then we can keep it fresh in the public’s minds that the Republicans in the Senate betrayed them. Because if not, by the time November rolls around, I can promise you, because we’ve seen it before, the public will have forgotten and moved on from the entire impeachment hearings.