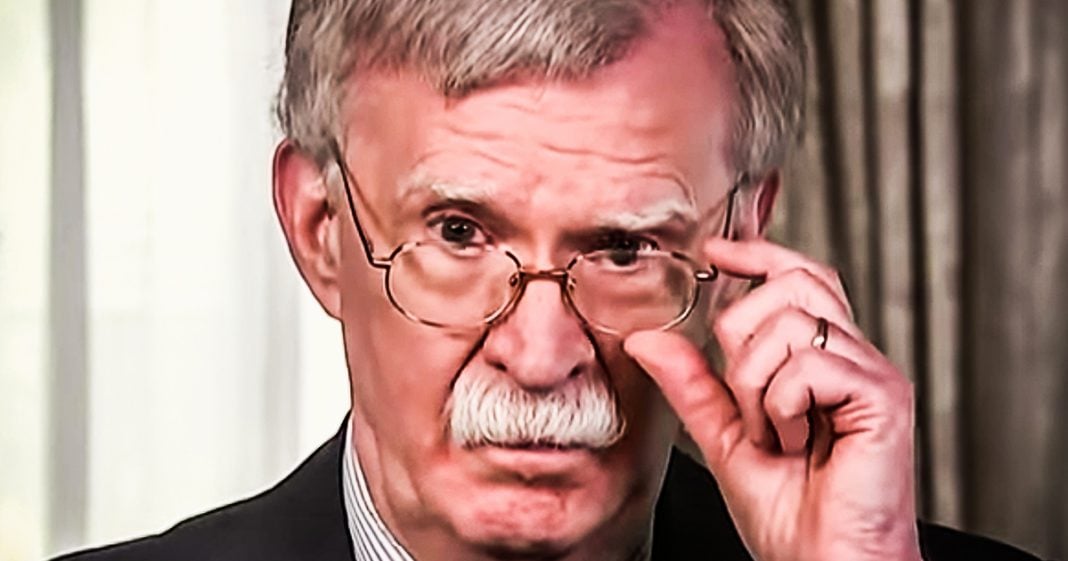 Former National Security Advisor John Bolton has confirmed in a new manuscript that Donald Trump ordered the freeze on aid to Ukraine until they announced that they were investigating the Biden family. This detail, if true, proves that the President committed an impeachable offense, and has sent Republicans on Capitol Hill into a frenzy. Ring of Fire’s Farron Cousins explains what’s happening.

So John Bolton has written a new manuscript that he is hoping to get published and it’s pretty obvious already that when it does get published, it’s automatically going to become a best-seller because the parts that we already know about seem to confirm that yes, Donald Trump committed a crime. Over the weekend, it was reported that John Bolton’s manuscript includes a complete, several pages really, that explain Donald Trump’s extortion plot with the Ukraine. John Bolton confirmed that in August of this past year, Trump came to him and said, we’re going to continue to freeze the millions and millions of dollars that are meant for Ukraine until they announce an investigation into the Bidens. Bolton then confirms that Mike Pompeo, secretary of state, was also told of this and Pompeo himself expressed concern over the fact that the president does not have the authority to do this. And that’s one thing we’ve discussed in the past as well. The president does not have the authority to block this aid once it has been approved by Congress, unless, they’re blocking it because they’re trying to figure out how to make the payments.

Anything other than that, the president does not have the authority to do it. Yet, according to Bolton, according to Pompeo, according to Bolton, this is exactly what the president did. So obviously this is pretty big news, right? I mean, this confirms that Donald Trump did the thing that he’s being impeached for. So how are Republicans in the Senate going to react? Well, they’re probably going to do absolutely nothing about it. We saw Donald Trump absolutely lose his mind all day on Twitter yesterday. So we know that he is not taking it particularly well, but he doesn’t really matter at this point. You know, all we needed was a little bit of confirmation from Bolton. We already had basically as much evidence as we needed to know that the president did in fact do this. So Bolton’s really just adding on top of all of that and that’s why it’s not probably going to change any Republican minds in the Senate, because Bolton didn’t tell us anything that we didn’t already know.

And that’s the saddest part of this story. It’s obvious at this point, multiple people have confirmed it and what’s going to happen now, in the coming days, is we’re going to see Republicans start to lash out at John Bolton. Trump too. We’re going to see them paint him as a guy who was unhappy with this administration, not happy that he basically got let go, was kind of forced out, didn’t get his way all the time, and so now he’s bitter and now he’s coming for Trump. That is how they’re going to try to paint John Bolton. And to be honest, part of that could be true. John Bolton’s not a good human being, all right. He is not a hero in this story at all for coming out and saying this. John Bolton is the guy who, if he had had his way, we would have already been two years deep in a war with Iran at this point.

He didn’t get his war, so he leaves the administration. He didn’t get his fight with Venezuela. He didn’t get his fight with any country that he was really wanting to go in there and just absolutely obliterate. So he got mad and left. So Bolton is bitter, but so is Trump. But I do believe in this particular instance, John Bolton is telling the truth, and I believe that because all he’s doing is reaffirming all of the available evidence that we already have. Republicans are going to continue to bury their heads in the sand on this one. This is likely not going to change enough minds to convict and remove Donald Trump from office, but what it could do, possibly, is give Democrats the 51 votes necessary to be able to call Bolton as a witness. Still find that a little unlikely considering the fact that Republicans have already said, yeah, we’re not going to do witnesses, but if the opportunity arises, Bolton does in fact need to be number one on that list of witnesses followed very closely by Lev Parnas.