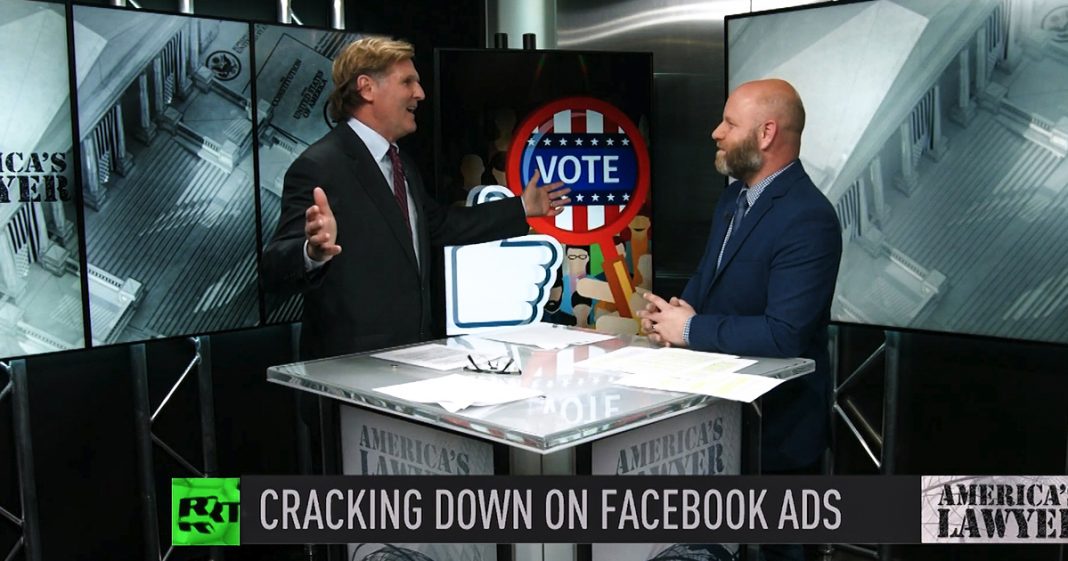 Via America’s Lawyer: Facebook has updated their ad policy as we head into 2020 but they still refuse to crack down on deceptive advertisements. Mike Papantonio and Farron Cousins discuss.

Mike Papantonio:             Facebook has updated their ad policy as we head into 2020 but they still refuse to crack down on deceptive advertisements. Okay. Now you and I disagree on this. I know we do. We’ve talked about it. I say let everything go. I, that’s what journalism is. It’s a reader who looks at a story and does not have enough sense to know that, you know, Hillary Clinton probably did not kill 100 children. You’re not going to stop that by saying, well this is false advertising. If you get, if you start down that road Farron, I think it’s really dangerous, your position I think is the American public has become so stupid that we’ve got to protect them. Pick it up from there.

Farron Cousins:                  We really do and to be clear, there’s a difference between allowing people to post these things on Facebook, which I’m in favor of versus it being a paid advertisement.

Farron Cousins:                  Right. So if I, if I run just a, you know, crackpot website and I want to post a story on Facebook, even if I know it’s false, everybody, you know, I, I can, I can do that. I should be able to do that because yeah, you’re protected from that kind of speech. But when it becomes a paid advertisement and you’re knowingly spreading lies and false information, that is a different animal and all Facebook has to do here and they, trust me, they’ve got the money to do it, is you hire some fact checkers and you put a disclaimer on it. You say, we fact checked this ad, you know, this little image that the campaign paid to put out there and we found it to be inaccurate. Here’s our source. That’s all they have to do. But they won’t even take that extra step. And then.

Mike Papantonio:             Okay, but, but are you comfortable with the, you know, these lame brains that are making decision like this for Google or for, for Twitter.

Mike Papantonio:             Are you comfortable that you got a bunch of freaks back in a room saying, ah, I don’t like this. We can’t let the American public see this. See, that’s where you get that whole, that whole, that, that’s where PC in America, political correctness is killing journalism. It’s killing the, it’s killing the journalistic process. It’s killing the political process. You know, that’s where the term snowflake comes from. I mean really are you such a snowflake, as they like to use the term, that you can’t stand to read this, that is so offensive you can’t even read it and then make a decision. I got real problems with that, Farron.

Farron Cousins:                  Well see, Twitter went the complete opposite direction. They said no more political ads and that’s hurting independent candidates out there who aren’t backed by a big major party with billions of dollars.

Farron Cousins:                  But they still allow, you could post whatever you want from, from, from websites, you can share these links, you can do those things. So they’re not necessarily going after free speech just like Facebook really isn’t. But what it comes down to is the advertisements. And at that point you do have a responsibility, or you should, to tell the truth, or to at least allow people to know that something in terms of an ad, something somebody paid to put up there may not be accurate. Because this isn’t really a first amendment issue in my eyes. This is a false advertising issue.

Farron Cousins:                  And if Facebook’s allowing that, that’s where you have to draw the distinction. But Citizens United says political speech is.

Farron Cousins:                  So there is a huge gray area here that unfortunately our, our, you know, corporate controlled courts are going to end up deciding eventually on.

Mike Papantonio:             I always, I always lean towards, open it up, let it roll, let the American public either be so stupid that they can’t understand what’s happening or that they take a little time and have a little insight. Farron Cousins, thank you for joining me. Okay.