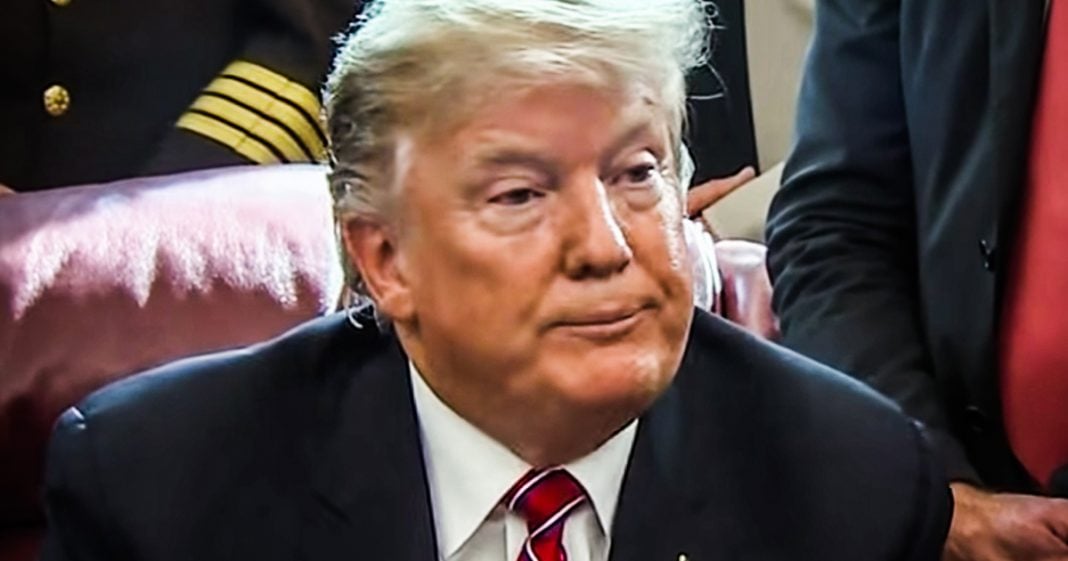 Donald Trump continues to tell us how great the economy is doing and how high the stock market is soaring. Even with the steady growth in jobs in this country, the economy is really only doing well for those at the top, and the numbers the administration keeps touting really don’t mean all that much. Ring of Fire’s Farron Cousins explains why the economy of the United States only looks good on paper.

Donald Trump has been on a tear recently about impeachment, but part of his defense for not wanting to be impeached, he keeps telling us that we can’t impeach him because the economy’s doing too well. He’s been saying that for the last year, even before impeachment was a thing during the Mueller investigation, he said, you can’t get rid of me, if you do, the stock markets will crash. The economy will tank and God, y’all just can’t risk that. And in the last couple of weeks, he’s been talking about all of these wonderful economic numbers, all the economic indicators showing that the United States is doing exceptionally well, better than we have in 50 years. In fact, he said, just this past week. But the truth is we’re actually not. And we have said this repeatedly, and I’m going to keep saying it repeatedly because it’s important that we debunk these myths of the booming US economy. But at this point, I’m no longer the only one saying this. Economists are starting to warn us about the same things. And they’re saying exactly what we hear at Ring of Fire been saying for quite some time. Yeah, the economy looks like it’s doing well on paper, but once you dig into these numbers, once you look at not just the stock market and you start looking at average people, this economy is not doing good at all, economists are telling us now.

And again, the economy only looks good on paper, but that’s also only if that paper doesn’t include all of the economic indicators out there. Take for example this number 63,179 versus 61,526, that’s the difference, those are the median pay for the year 2018 and 1999 respectively. That is a difference of a little under $1,600. $1,600 and that is the average median income here in the United States after 20 years, it increased by $1,600 in 20 years. That’s the main number you need to know because that indicates a very real problem, a problem that economists actually have a word for, stagnation. We are currently in a period of stagnation, and we heard that term a lot in the 80s, I was barely in kindergarten at the time, and I remember watching the news with my parents and hearing about stagnation. You heard it in the early 90s too, stagnation. What does it mean? What is it? Well, stagnation is basically a period of economic growth that leaves out the middle class. We’re not making more money. When adjusted for inflation, we’re actually making less money today than we were 20 years ago.

But the top 1%, top five, even 10% they’re making more money than ever. Money, hand over fist. And it’s all because of Republican policies. The stock market, yeah, it is doing great. Only on days when Donald Trump does not tweet more than 30 times. That’s actually what analysts have found out. He tweets more than 30 times the stock market tanks. So yeah, on paper, everything looks fine if you ignore 90% of the country, but that is exactly what Donald Trump is doing. He’s talking about unemployment rates and sure, those look great, but what kind of jobs are these people working? Oh, come to find out a little over 40% of them are working jobs that actually don’t even pay a living wage. So they’re still having to apply for government benefits because they can’t afford food and rent and all those things that other people have to have.

All people have to have, they can’t do it. They can’t afford their medications. Majority of people in this country can’t afford an emergency of $400. The economy is not doing well and the reason it’s important to continue debunking these talking points is because this is all Donald Trump has. As we get closer and closer to the 2020 presidential election, you’re going to hear him talk about how great the economy is all the time. Remember these studies, remember these numbers I’ve given you because these are the talking points that we have to use to prove to everyone that no, unless you’re already super rich, this economy sucks.