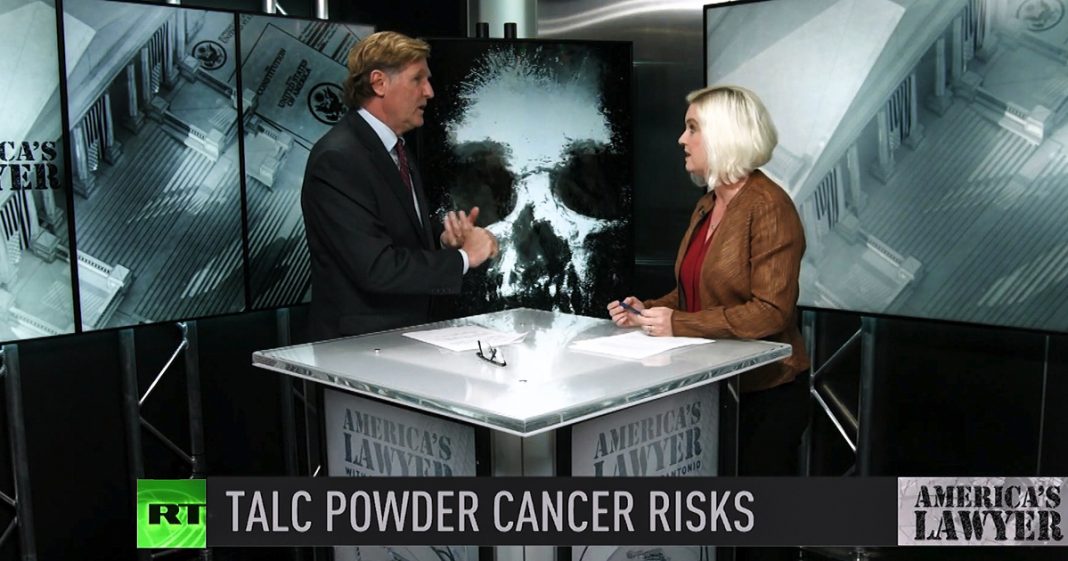 Via America’s Lawyer: Mike Papantonio is joined by legal journalist Mollye Barrows to spotlight how Johnson & Johnson has been whitewashing the health risks of its talcum powder, which independent studies have found to contain asbestos and cause a spike in cervical cancer rates among healthy women.

Mike Papantonio:             A new study has revealed that certain groups of women are at a higher risk of cancer if they regularly use talcum powder. Here to talk about this is legal journalist, Mollye Barrows. I saw this study, this study, if you read it, I don’t know why Johnson and Johnson is all up in the air, this is great news. It’s not great news.

Mike Papantonio:             They, it’s a PR stunt. The great, I guess the best they can take from the study is that the people running the study said, ah, we don’t have enough information.

Mike Papantonio:             The headlines are, headlines make it sound like there’s no problem with baby.

Mike Papantonio:             Yeah. Put it on your cereal in the morning. Okay. The reason they do that is the reason they do it all the time with any pharmaceutical case, advertising money is so huge. I mean I can’t even, it would be difficult to even get close to the amount of money that Johnson and Johnson spends with ABC, NBC, MSNBC, they pump more money because it’s not just this case. You see Johnson and Johnson is under the gun with at least, at least four pharmaceuticals right now that I know of. The opioid crisis.

Mike Papantonio:             We know that they were a big player in creating the opioid crisis. We know, we’ve been in front of juries with this case, with literature that’s overwhelmingly shows there’s a relationship between asbestos in the, in the powder and, and, and the, the cancer. So where do they go? What’s the victory here? I’m having problems with it.

Mollye Barrows:                Well, it’s interesting. Well first of all, it was a US led study. It was US researchers that are, you know, produced this study. They said it’s the most comprehensive yet, that they took four different government studies and basically used nearly 253,000 women. And what they found was an ambiguous answer. They’re answer that the lead researcher, Katie O’Brien, with the National Institute of Environmental Health Sciences, which is part of the department of health and human services basically said we set out to show one way or the other, whether there was a link between ovarian cancer in talcum powder. And what we found was we didn’t really get an answer, but what they did find it was statistically insignificant. So they chose to interpret it, whoever read the study and wrote these headlines like CNN and NPR and Reuters and some of them basically saying, no clear connection, kinda.

Mollye Barrows:                But still a risk for cancer, especially if your parts work, if you’re a woman and you have normal reproductive parts. By the way, that group we did see an increase in risk.

Mike Papantonio:             Exactly. So, but nevertheless, I think the real story to me is corporate media’s attempt to bend over backwards for their advertiser.

Mollye Barrows:                Well, they’re like, stand by for these messages and then it’s, you know, a minute to 30 seconds of whatever. Like you said, pharmaceutical ad that’s on there and three quarters of it is telling you about the risks that can come along but they don’t ever want to criticize them.

Mike Papantonio:             We know that three quarters of the cases that have been tried against Johnson and Johnson, a jury that here’s the whole case, not some journalist who has eaten a hamburger trying to get a story done and trying to please a corporate.

Mike Papantonio:             But the jury has looked at it and said, yeah, the, it’s kind of overwhelming that this causes cancer.

Mike Papantonio:             Yeah. What scares me is the media, again, does such a disservice to the American public.

Mollye Barrows:                Well, they just hit these bullet points without really getting into the meat and putting it in full context. This is just the latest of any of researchers that could potentially be compromised. And I’m not saying these particular researchers are but like you pointed out in the past, there’s so much incestuous relationships between government officials and some of the very agencies that they’re supposed to regulate or the companies they’re supposed to regulate.

Mike Papantonio:             Okay. Let’s assume that that, that happened here. I can promise you we’re going to find that some of the people that involve themselves with this are moving on to now work for pharmaceutical.

Mike Papantonio:             Johnson and Johnson. We know that agency capture is huge. We know that biostitutes are out there that want to sign off for anything for the right amount of money, but let’s assume all that, in this case it doesn’t, doesn’t really make any difference. Kind of a moot issue because this study says we can’t conclude anything.

Mike Papantonio:             A healthy woman has an increased risk of cervical cancer if they use the powder.

Mollye Barrows:                We haven’t found any asbestos in other bottles. So, like you said, there’s a lot of other evidence that’s out there that points to the fact that there is a risk, that there is a connection between asbestos and talc. It grows together naturally in nature, so it’s not a surprise that you’re going to have even minuet amounts in there, and sure, you might want to say, hey, we’re going to give the industry some leniency. You can’t have 0% of everything, even though you’re not supposed to have asbestos in anything.

Mike Papantonio:             To warn the public because an advertiser, as advertisers money trumps the best interest of consumers in this country.

Mike Papantonio:             That is the modern story of corporate media. Mollye, thank you for joining me. Okay.