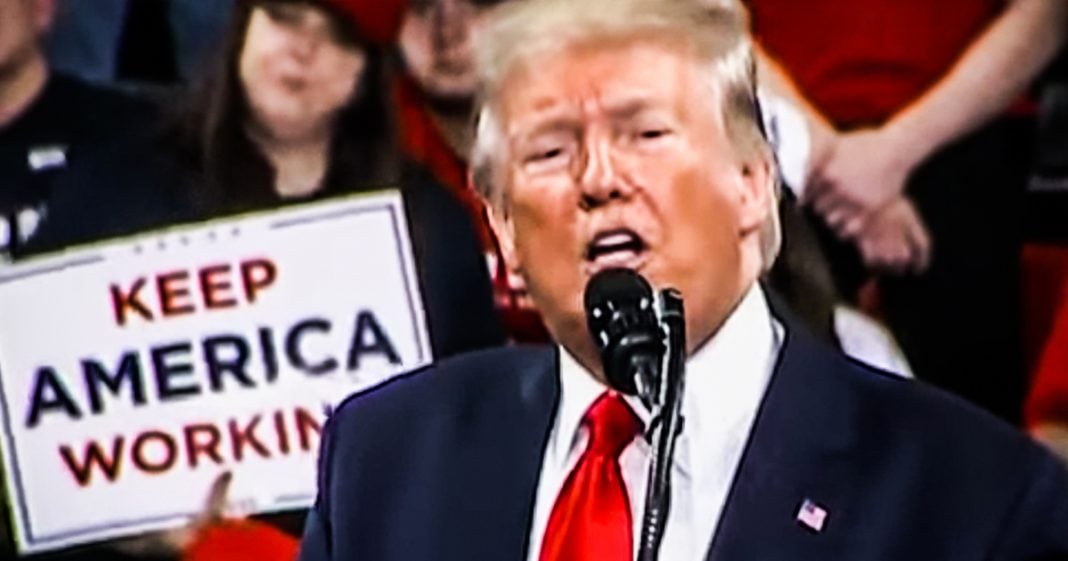 According to a new NPR poll, a slim majority of Americans believe that Donald Trump (and by extension, the Republican Party) are actually encouraging election interference. They are correct, considering the fact that Mitch McConnell has prevented any election security measures from even coming up for a debate. Our elections are weak, and Republicans want to keep it that way. Ring of Fire’s Farron Cousins discusses this.

According to a new poll published earlier this week by NPR and conducted by NPR, 51% of people in this country believe that Donald Trump and by extension the Republicans have actually welcomed and invited election interference here in the United States. Now, specifically, this poll only asked about Donald Trump. Did Donald Trump welcome election interference into this country? A huge majority of Democrats said, yes. A majority of independent said yes. Majority of Republicans said no, but Adam, all together you get 51% say yes he did. Now the reason I said, and by extension Republicans when I first introduced this is because, let’s be honest, that is what this is actually about. I know we like to hit on Trump. We like to bash on Trump as much as we possibly can. Not only because it’s fun, but also because it’s necessary. But we also like to reiterate the fact that Donald Trump is not the cause of the problems with the modern Republican party.

No, those happened decades ago and they let the disease fester to the point where Donald Trump has just the latest grotesque symptom. He’s not the cause of any of it. He’s just the latest pus filled boyle on the ass of the Republican party. The Republicans themselves, Mitch McConnell, Lindsey Graham, Marco Rubio, all those idiots over there in the Senate. The reason we believe they welcome election interference is because they do. We have bi-partisan election protection bill sitting on Mitch McConnell’s desk that he refuses to even bring to a vote. We have had multiple different bills with different ways to help fund election protection die on Mitch McConnell’s desk and so I do get a little annoyed with this NPR poll that says most people think Trump is welcoming interference. No Mitchell McConnell, Mitch McConnell was welcoming interference by not doing anything about it. The Republican party as a whole is welcoming interference by not switching out these voting machines that are 100% unreliable and very easily hackable by children as young as 11 years old.

Not Russia, not China, not anybody else. That’s good old fashioned Republican party, interference. They have been doing it for decades and in some cases with the gerrymandering Democrats and played right along with it too. Nobody’s hands are truly clean in this whole mess. And until we change the system, nobody’s will be, we need paper trails. We need to get rid of these electronic voting machines. We need to secure our election systems so that hackers can’t so easily get into them. We need to get rid of the voter ID laws. Either that or guarantee every American citizen a photo ID. And if you can’t come to the DMV to get it, we’re going to come to your house. And until we can do that and protect people’s right to vote, get rid of the voter ID laws. If you’re not willing to do all that, then you too are welcoming election interference.