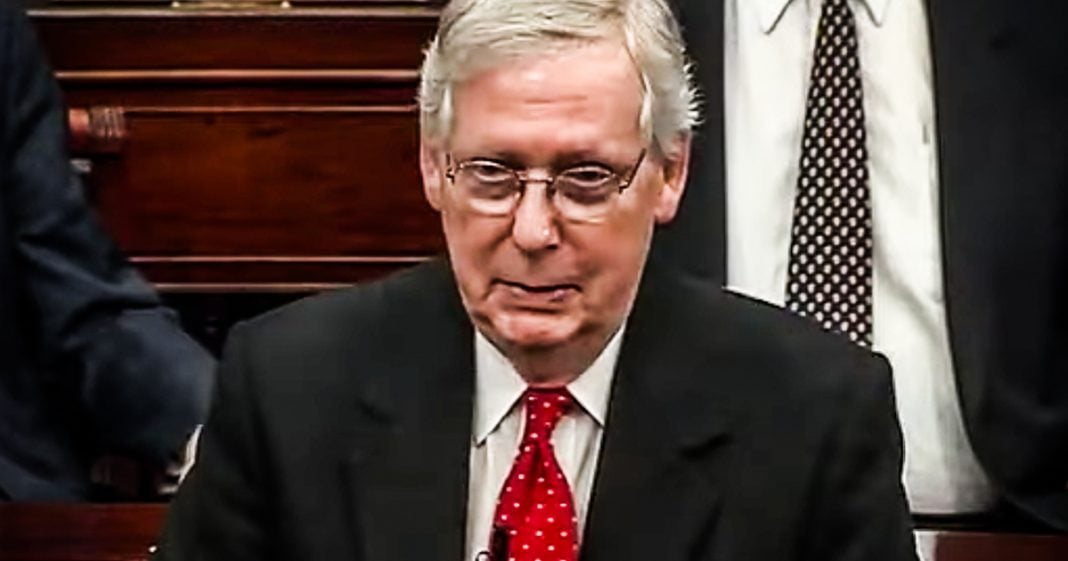 The Senate impeachment trial of Donald Trump may prove to be a Pyrrhic Victory for the Republican Party. They will almost certainly acquit Trump, but the damage that they inflict upon themselves in the process could prove to be too great to overcome. According to the latest round of polling, 71% of Republicans aren’t very happy with how McConnell has handled impeachment, and that could cost them dearly in November. Ring of Fire’s Farron Cousins discusses this.

Well folks, the only thing we learned about impeachment this week is that the Senate is not going to end up voting to remove Donald Trump and that all of those would be senators who may or may not side with Republicans. Maybe they’re going to go with Democrat. No, they all went with the Republicans and they will for the remainder of this trial. But we learned something else today, folks. We learned throughout this week that the majority of Republicans out there, you know, not in Washington DC but just the rest of the country, they’re not happy with Mitch McConnell. And that may be the only good thing that comes out of this impeachment. According to the latest round of polling, 71% of Republicans in this country are not happy with how Mitch McConnell is running this impeachment trial because that 71% wants witnesses. They want to hear new testimony from new witnesses, they want new evidence, they want this to be a real and fair trial.

And Mitch McConnell is not delivering that for these voters because remember, these aren’t just Republicans, these are voters, folks. And if 71% of Republicans want these new witnesses, new documents, new everything for this trial, imagine what those numbers are for Democrats and Independents. And yeah, they’re even higher than 71%. So you have a vast majority of people throughout this country, across party lines, who say, yes, we want witnesses, we want documents, we want subpoenas, we want to hear from everybody. We want this thing to be real. Now, Republicans in DC have kind of mused amongst themselves, according to reports, thinking that maybe this impeachment sham might come back and hurt us. We don’t know. But the truth is it really could end up being a Pyrrhic victory for the Republicans. Yes, it’s pretty obvious they’re going to acquit Donald Trump, but the damage they do to themselves in the process, that may be something that they cannot overcome.

I know a lot of those 71% of Republicans who say they’re not happy with the way things are going right now, most of them, a huge majority of them are going to end up voting for whoever is running as a Republican where they live. That’s a given. But if you can siphon off three or four or 5% of those angry Republicans who say, I don’t like this, just that small percentage in many races in this country, that’s enough. That’s enough to flip it. Either that four or 5% stays home or they vote third party or maybe they even vote for the Democrat. That’s the least likely of those scenarios. But either way, taking 5% away from a Republican candidate can swing a lot of close races in this country and maybe that was the Democrat’s plan all along. I don’t want to give them that much credit because they typically do not think that far ahead and I do not think that this was their grand scheme all along, but if it works out in their favor, great and they can probably go out there and claim that this is what they wanted the whole time and we’ll never really know if that was or wasn’t.

The important thing is to beat these Republicans, not just Trump in the White House, but these Republicans in the Senate. Because even if we get a Democratic president at the end of this year, beginning of next year, a Republican controlled Senate is going to kneecap them harder than we have ever seen, but that Senate with the public so pissed off at them right now, that truly is up for grabs and that has to make Republicans a little scared.