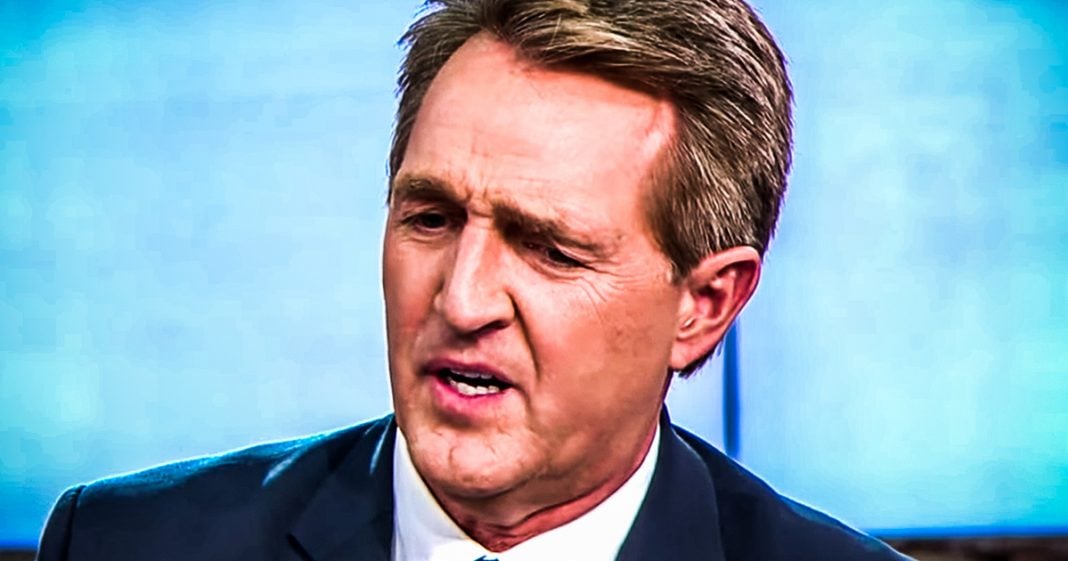 Former Republican Senator Jeff Flake said in an interview that Republicans in the Senate are afraid to take on Donald Trump because they want to keep their jobs. Pointing out that Trump is still hugely popular among the Republican base, Flake said that going after the President for some of these people would be viewed as a political death sentence. Ring of Fire’s Farron Cousins explains why Flake is wrong about this.

Earlier this week, former Republican Senator Jeff flake appeared on CBS as this morning program to explain why Republicans in the Senate are so hell bent on defending and protecting Donald Trump when in reality, most of them clearly aren’t big fans of the guy. And Jeff flake spelled it out very simply. You said, well, because they want to keep their jobs, and the president is extremely popular among Republican primary voters. That is a subset of a subset of a subset, but they’re those who decide who represents the party and the general election. My fear is people out there know that even if this is not an impeachable offense, that the president did something wrong, and for Republicans to maintain that he didn’t is just wrong. And this has longterm ramifications for the party if we act as if we are just devoted to the president no matter what. Out of this cult of personality that we’ve seen, we certainly saw it in the house.

So here’s the thing. Jeff flake is both right and he’s wrong. He is right about the fact that Trump is still popular with the Republican base, not as popular as Republican presidents of old, but still rocking a solid 85 to 90% approval rating. Um, and yeah, that is a subset of a subset of a subset. The Republican party base is not the general public, but if Republicans lose that, they’re going to face a tough time being reelected if they go against the president. Now this is where I disagree a little bit because that only works. That scenario only works if they get a primary challenger. If they do not get primaried by a Republican who supported Trump against one who didn’t support Trump, then the person who did speak out against Trump didn’t, uh, go with Republicans on impeachment. They actually still stand roughly the same chances of getting reelection it reelected, if not a little bit better because they can bring in some moderates to their side.

The people who were kind of on the fence about their political beliefs, cause they don’t pay much attention. They might go back to you, whereas they might abandon you if they think you’re a part of this impeachment sham, the base all they’ll be mad at you. Sure there’ll be super pissed and they’re going to walk into those polling stations and vote for you anyway because they damn sure aren’t going to sit there and vote for a Democrat. They know that and you know that, but that’s why I say you’re only wrong if there isn’t a Republican primary challenger, and that is again where things get a little more muddy because yeah, we’ve seen lots of challengers come out and we’ve seen what the DNC has done to challengers who come out and try to challenge incumbents on the democratic side. They weren’t expecting it in 2018 but they’re expecting it in 2020 and they’re trying to make those primary challengers pay.

They’re blacklisting. Any donors who come out or not donor, excuse me, a vendors who come out and say, I’ll work with a primary challenger. Well guess what? Now you’ve just lost all your contracts with the DNC. You can’t ever work with us again. We hate you. If you think the RNC wouldn’t do that same thing, you’re kidding yourself. Now I do agree with most of what Jeff flakes said here. Obviously the public as a whole outside of the Republican base is not going to be happy with these Republicans for just towing the line and going with Donald Trump regardless of what happens, regardless of the evidence, regardless of the witness, if they’re allowed to be called, if you still just go along with it because it’s your party, you will eventually pay. So technically wouldn’t that be costing these people their jobs anyway?

It’s a bit of a hard thing and it’s kind of hard to analyze all the little moving pieces here inside of Jeff flakes, you know, four sentences. Overall, he’s mostly right, but I think some of these Republicans, even if they’d say, Hey, I’m not going to be impartial. I’m going to vote because I want to protect my party. That still isn’t enough to turn off some of the voters in their state or for others. It’s enough to turn off just enough people to make them lose the election. We won’t really know. And that’s what’s frustrating about this whole thing. We aren’t going to know until November until people go to the polls. Then we will finally get to see how this whole impeachment thing played out. Did Republicans win or did the Democrats, because at the end of all this, that’s all that matters to establishment on both sides, right? Did we win or did they win? It was never about justice. It was never about holding the president accountable. It’s all about did my team score the game winning field goal or was it them? And this is a game that’s not going to end until November.