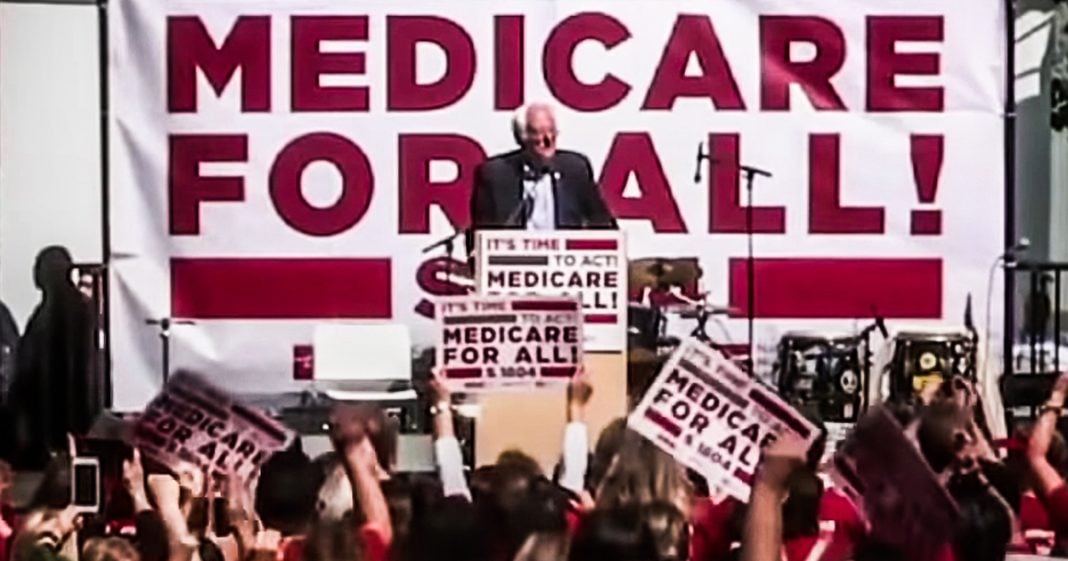 A massive new study has once again confirmed that enacting a nationalized healthcare program in the United States, like Medicare for All, will actually reduce healthcare costs and end up saving American citizens money. This study looked at 30 years’ worth of healthcare costs in countries with a public healthcare plan, and found that nearly all of them saw immediate reductions in cost within the first 12 months, and all of them showed reductions after a few years. Ring of Fire’s Farron Cousins explains what this means.

Another new study this time published in the PLOS medicine journal has once again proved that Medicare For All will not only reduce healthcare costs, but will also end up saving us money, sometimes within the first year. Now it may sound like those two things are not the same, but believe me, they actually are because as we have discussed roughly one third of healthcare costs here in the United States, a little over a third, goes to administrative costs. Well, this new study found that in 22 of the areas they studied across the planet that have universal healthcare programs, and they did this over 30 years, they found that every single one of those countries that instituted a universal healthcare program saw an overall reduction in the cost of healthcare. And then they also found that average citizens, even if they had to pay taxes, you know, to get these programs, they still ended up saving money on healthcare.

And 86% of these 22 countries they studied, saw immediate reductions and savings within the first year of implementation. And this study concludes that we here in the United States would see the same and they did 10 different models of this for the United States. Every model showed that we would see a reduction in cost and we would see a savings for average citizens, for everybody. Every single model, even the models where they tried to input an increase in costs for the first year, after a couple of years saw a reduction in overall costs and the same savings for our citizens. There is no way to slice it, folks, that says that Medicare For All will cost us more money. That is a false talking point disproven by every single study, even the conservative ones, on this issue. The only way to reduce healthcare costs, the only way to save American citizens money is universal healthcare. That’s it. That’s the talking point. That’s the line. That is what every study has proven. Every one of them, as I mentioned, even the conservative studies accidentally prove that too. So why are we still having this conversation? Why are we still hearing these brain dead corporate media and corporate Democrats out there saying, how are you going to pay for it?

We, we already know. Every study has shown that we pay for it. Everybody chips in a little what they can with taxes. Yeah, the top 1% corporations, they pay a little bit more. We also reduce the costs overall, so we’re not having to pay that trillion upon trillion dollar price tag, that’s actually a lot less than that, because we’re reducing the cost as well. This, the studies are unequivocal folks. Medicare For All is the only path forward and I for one, will not support any candidate running for president that does not firmly stand behind this idea. Why? Not, because I’m a single issue voter, but because anyone who can look at these studies, any of the studies, all of the studies, and still try to act like this program is either too costly or unattainable, they’re flat out lying to us and that is not something I will ever support.