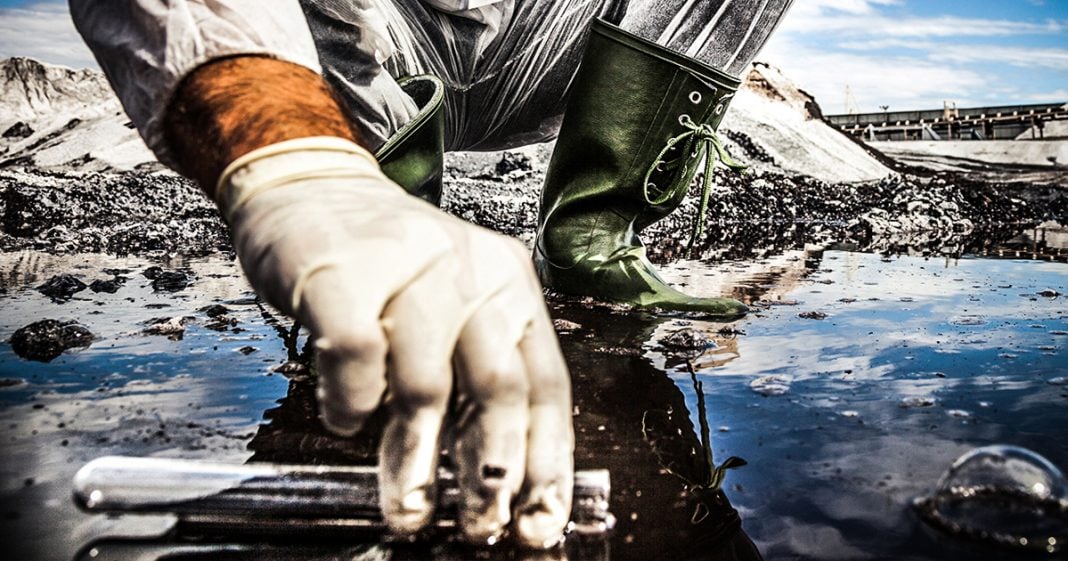 The Trump administration this week announced the official rollback of the Obama-era Waters Of The United States rule, which expanded the Clean Water Act to include smaller bodies of water that had not previously been covered. This move will allow the poisoning of huge amounts of water in this country, most of which is used for consumption and recreation. Ring of Fire’s Farron Cousins explains what this will do to the United States.

One of Donald Trump’s favorite claims to make, other than the fact that the economy is doing great and we’re also making so much more money, one of the other claims he likes to make is that the United States has cleaner air and cleaner water than we have ever had in the history of the United States. Even back when this country had waters that were untouched, when pollutants didn’t even exist, he still says our water today better than it’s ever been in the history of this land. He even said that by the way, earlier this week at Davos, Switzerland during a little press conference talked about our numbers. Our water numbers are through the roof, he says. Our air numbers are great. Those are great air and water numbers, he says, he didn’t tell us what the numbers were or what through the roof means, but we could rest assured obviously that our numbers are great.

Meanwhile, back here in the United States, his EPA finalized their rule destroying the waterways of the United States Act, which was put in place by Barack Obama that protected smaller rivers, estuaries, wetlands and streams from corporate pollution. It was an expansion of the Clean Water Act because in the past, the clean water act would only protect those bodies of water if a portion of them traveled underground for a small amount of time. You know, because even back in the 70s we realized well hold up if this water is going underground, it’s obviously getting into the drinking water. Let’s not have corporations pollute it. Obama expanded that because we learned at the time or through the years that, hey wait a minute, even if it’s just surface water, it’s still goes down into the aquifer that’s still poisoning people. And even if it’s a small body of water, we need to protect it.

Let’s not be dumping toxins into these because they do end up in the environment, in the animals and of course inside of human beings. This week, Trump finally killed it, not just Obama’s order protecting the surface water, but they also went back and went ahead and killed the regulation from the original Clean Water Act that protected those bodies of water if they traveled partially underground. So what this means, we will now have millions of people in this country who will be subjected to higher levels of pollutions, carcinogens, heavy metals, and other toxins in their drinking water as a direct result of this move by Donald Trump. So why, what’s the point? Right? Why on earth in this day and age, would anybody be stupid enough to say, hey, let’s let corporations poison our water? I mean, that would seem like a political suicide, right? Well, for Donald Trump, it’s all about personal gain. Always has been, always will be. Because one of the groups that had been regulated under Obama’s expansion of this was golf courses. You know, you weren’t allowed to go dump a bunch of pesticides into the water traps at your golf course or whatever they’re called. I don’t play golf. I don’t care. But you couldn’t dump, you know, toxins in there.

Now you can, which means that golf courses aren’t going to have to properly dispose of all these excess chemicals. They’re not going to have to prevent the runoff from the green into the water trap. Huh. Wonder who would benefit from that? Probably a guy that owns a lot of golf courses, right? Which would be Donald Trump. I’m not saying he only did it so that his golf courses don’t have to pay extra money to protect their little waterways, but I am saying, I guarantee you that was a part of the thinking process here. It also allows other corporations to go and let their toxins freely flow into estuaries, wetlands, swamps, you know, may not be the prettiest things, but they’re biologically diverse. They are essential habitats for species, both endangered and not, and we have a duty to protect those, but not anymore. Not thanks to Trump. And of course a lot of this water anyway, the streams, the rivers, those flow into the aquifers and we drink those. So thanks to Donald Trump, we can now all but guarantee that when we go to the tap to get some water in the next year or two, there’s going to be a lot more pollutants in it than there are today.