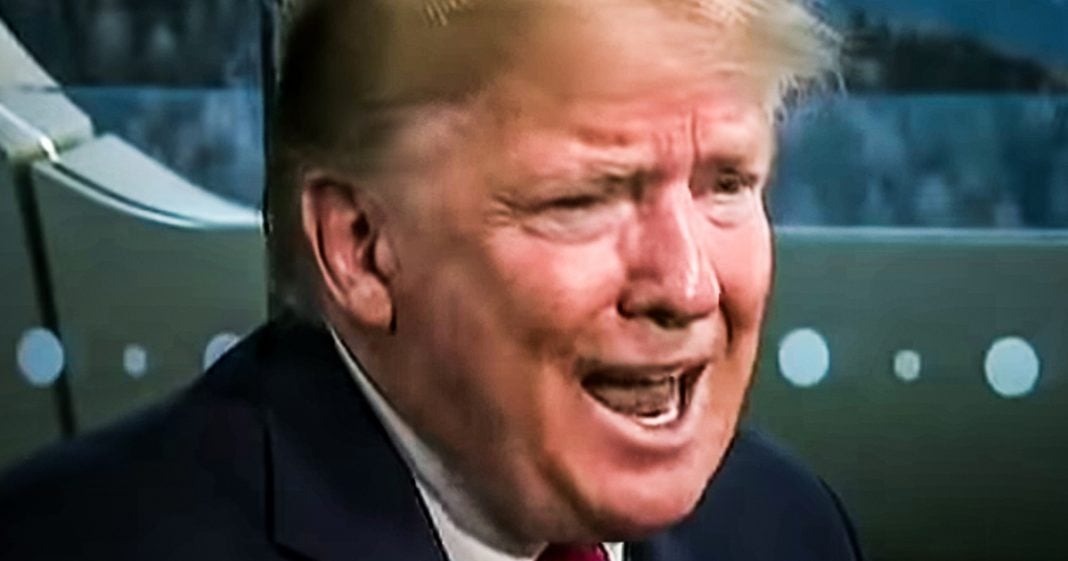 Donald Trump might not be happy with the way the impeachment is going, but he certainly isn’t letting the press know that. Earlier this week, Trump bragged to a group of reporters about how well things were going in the trial for him because he and his White House “have all of the materials.” This was a reference to the fact that he has stonewalled the investigation – one of the very reasons he got impeached! Ring of Fire’s Farron Cousins discusses this.

It’s important to remember that Donald Trump was impeached for two things. One of them, obviously the abuse of power and that is the alleged extortion scheme with Ukraine. You know, you get dirt on Biden or you at least announced an investigation. You do this, I’m going to release this aid. If you don’t, we don’t know what’s going to happen, you know, a real mafia style shakedown. The other thing that Donald Trump was impeached for in the House was obstruction of justice. You know, not complying with all the subpoenas, using executive privilege to not allow your people to go and testify before the House when they were called to go and testify before the House. And then earlier this week at a press conference, Donald Trump actually bragged about that, when he was asked about impeachment.

Here’s what the president of the United States had to say. He said, when we released that conversation, all hell broke out with the Democrats because they said, wait a minute. This is much different than what Adam Schiff told us. So we’re doing very well with regards to impeachment trial. I got to watch the impeachment trial enough. I thought our team did a very good job, but honestly we have all the material. They don’t have the material. So he’s sitting there bragging to the press, we have all the material. They never got their hands on it. I’m such a smart guy. You’re literally bragging to people whose job it is to report on what you say about one of the things you got impeached for, so you’re, you’re admitting to it. You just admitted to it. That’s what you just did, and yet every Republican in that Senate is going to ignore that. They’re going to pretend that that didn’t just happen. They’re going to pretend that you’re not out there bragging about obstructing justice. But you did brag and more importantly, you did obstruct justice. You didn’t let your people testify even when they were subpoenaed. You did not turn over the documents that the Democrats demanded and subpoenaed. You know, to give it a little perspective, when Bill Clinton was impeached, the White House turned over 90,000 pages of documents that Republicans requested.

The trial in the Senatem, they got to call witnesses. They got to introduce new evidence if it showed up. So yeah, that was a fair impeachment. The White House complied. Republicans did everything they could, but at the end of the day, they didn’t have the votes. Trump, on the other hand, does have the votes, but he’s not even willing to risk a single Republican vote by letting all of that information out. Only the guilty hide. Only the guilty hide. That is what any good lawyer would tell you. That is what any police officer in this country would tell you, although I don’t really trust them anymore. But in this case, it’s true. Donald Trump is a guy who’s been hiding things all his life because they’re unflattering and could potentially get him in trouble. His medical records, his school transcripts, his standardized test scores, his tax returns, his business tax returns, his financial records, and all of the evidence that the Democrats have requested. It’s not a coincidence. It’s who he is and it’s who he is because he knows that all of that information is going to put him in a lot of trouble. Or in the case of his school transcripts, make him look like an even bigger idiot than most of us already think he is.