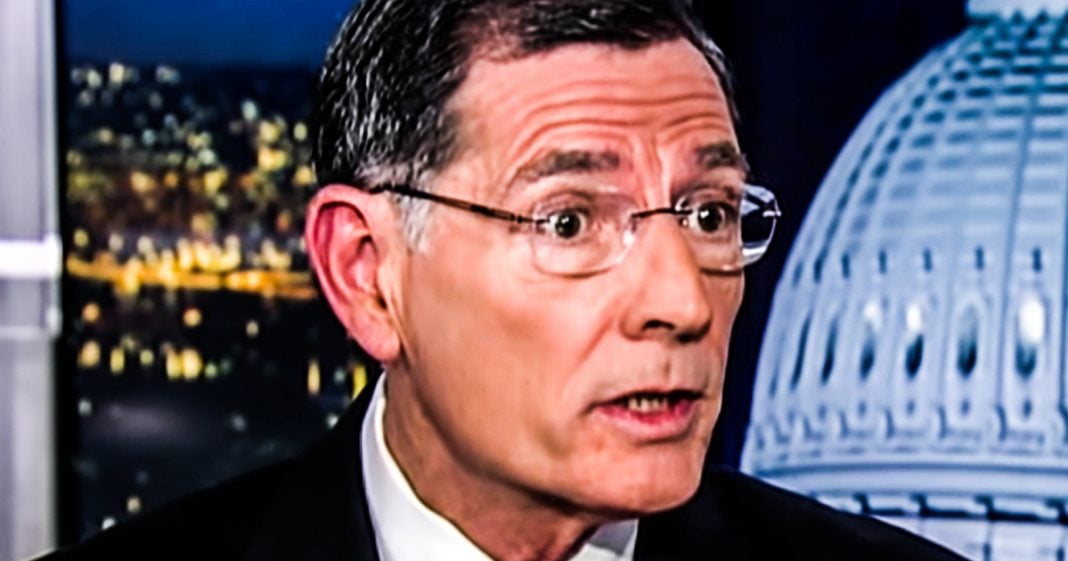 Senate Republicans have prevented the Democrats from introducing any new impeachment evidence during Trump’s trial, but they still have the audacity to whine to the press about not hearing anything new from the Democrats. This is all part of their plan to make it seem like the Democrats have nothing new to report, and the public is likely to buy into it. Ring of Fire’s Farron Cousins discusses this.

Well folks, we have another day of the impeachment trial ahead of us here followed by a weekend of the impeachment trial where Donald Trump’s lawyers will be making their case when nobody is paying attention and Donald Trump is not happy about that. But uh, here’s the thing, let’s go ahead and recap what’s happened so far this week. Adam Schiff obviously got up there and gave a tremendous opening statement and Republicans weren’t happy about that. And in the procedural votes, Republicans voted to not allow witnesses to not allow any new evidence to be submitted, but they are going to allow the evidence from the house impeachment inquiry. So I guess that’s a positive. Other than that, we saw Republicans and Democrats incredibly fidgety, tired, sleepy, leaving early, walking out in the middle, nobody, it seemed wanted to actually be at this impeachment trial other than obviously Adam Schiff. Adam Schiff was loving it. Adam Schiff is getting a lot of love from the media, a lot of love from a Democrats and Progressive’s online who otherwise would not be paying him any attention and certainly wouldn’t be paying him any compliments.

So Schiff is digging this. The rest of the Senate body, not so much, but here’s an interesting thing that happened earlier this week after Republicans voted to not allow any new evidence and to not allow witnesses. They actually told the press, they complained about the fact that Schiff is down there just telling us things that we already know. You know, he’s not telling us anything new. It’s boring. They said, he’s not telling us anything new. Gee, I wonder why that is Republicans. Maybe it has something to do with that vote you had taken 36 hours prior were you said, you can’t tell us anything new, but here’s the thing. Republicans are banking on the fact that the public is not going to understand those procedural votes, and to their credit, they’re probably right. Six months from now, Republicans are going to be out there campaigning and they’re going to be telling the public, Hey, Democrats launched this impeachment farce.

They didn’t give us anything new. They didn’t tell us anything new, and it resulted in Donald Trump’s acquittal. Isn’t that pathetic of them? They wasted two years doing this. What a bunch of losers. That’s what they’re going to say. Some of them may be, they’re going to say that verbatim. We don’t know yet, but they’re going to say some form of that, and it’s going to be six months after the fact, and the public’s going to forget about it. Now you’re probably going to have one or two people in that crowd stand up and say, well, didn’t the Republicans vote to block witnesses and evidence? And then the Republican candidates going to say something snarky. Make everybody laugh at that person and everybody will move on and forget about it. And that’s the problem with this. It’s the problem with this entire impeachment inquiry, anti entire impeachment trial.

It’s happening too early. If we had done this in September, I’m going to stretch it out a little bit in October. Oh man. Public would be on the Democrat side as we head into November, but unfortunately this thing will be wrapped up prior to Valentine’s day. Everybody’s gonna forget. We’re gonna forget the little nuances. We’re going to forget Ted Cruz’s ridiculous press conferences where he’s very clearly setting himself up for a future presidential campaign while lying about what the Democrats did. We’ll forget all of the little bad things, all of the little lies, and the main thing the public’s going to remember is that Donald Trump got acquitted. Some will be happy, some will be furious, but that anger won’t last. The happiness probably won’t last either. We know what the outcome’s going to be and we know that the public is going to move on, and that is the saddest thing about this entire impeachment trial. Yeah, it’s pretty obvious. Donald Trump committed crimes. Donald Trump should be impeached. Donald Trump should be removed from office. Unfortunately, Republicans are never going to let that happen, and they’re also going to do everything in their power to lie to the public just enough to make them think this was a fair trial.