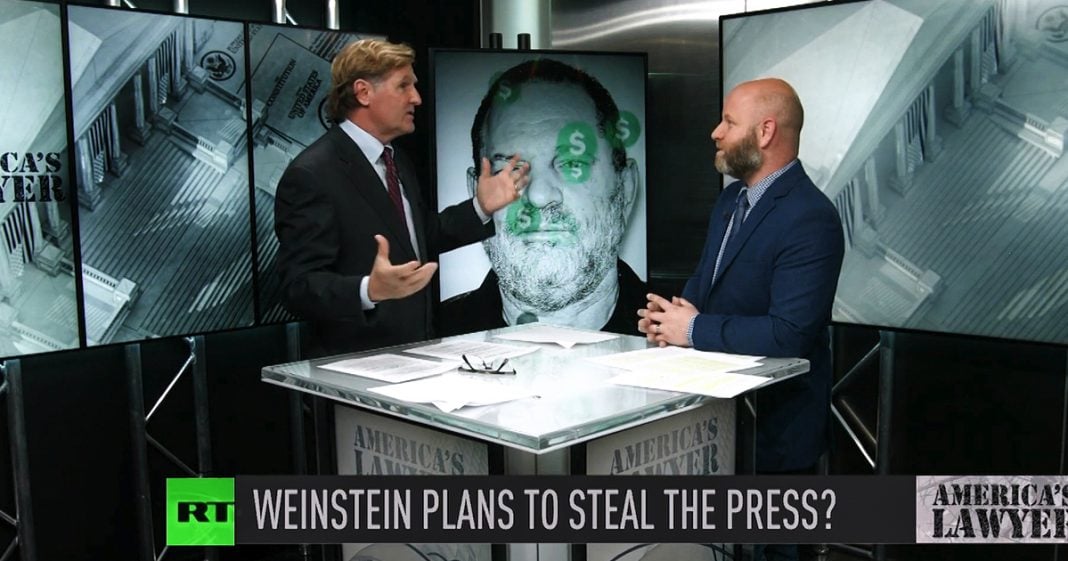 Via America’s Lawyer: Harvey Weinstein stands accused of rape and sexual harassment by 100 women. But as the trial begins, we find that a number of journalists had been holding back on a second document that was handed out to them by the Weinstein team. Mike Papantonio and Farron Cousins discuss.

Mike Papantonio:             Harvey Weinstein stands accused of rape and sexual harassment by 100 women. But as the trial begins, intels leak that a number of journalists had been holding back on a second document that was handed out to them by the Weinstein team. Okay, this, this, this story to me, here’s what it raises and tell me where you want to take it from there. But to me it’s just so obvious. It’s the American journalists mainstream again, that says, okay, here’s the guy that’s got money. He’s got influence. He doesn’t look like a rapist that we would characterize as a rapist. But he is, he’s a serial rapist and oh by the way, knowing Weinstein is part of the A celebrity list. So we don’t want to treat Weinstein bad because if we do, we can’t get to other celebrities. They won’t talk to us. It’s all about journalist’s saying yeah, I’m going to forgive this. I’m not going to report it. This information was given to them a long time ago. They’re out, it’s, it’s, it’s like dead silence, isn’t it?

Farron Cousins:                  Right. I mean, Weinstein’s team is out there passing around this PowerPoint to journalists that all it does is smear the victims.

Farron Cousins:                  Say that you can’t believe these women, you know, oh they were probably dressed a little too provocative. The same old, same old, we always hear in these sexual assault cases and journalist’s.

Farron Cousins:                  Right. And they had it for, for months, some of them for a couple years, because it’s gone through several different iterations of it. And then finally you get reporter Irin Carmon who gets her hands on this and says, okay, this is actually something we need to expose here.

Farron Cousins:                  But, but it is, as you say, it’s just as much a media story as it is a Weinstein story. Because these reporters, they wanted access and a lot of them, according to the reports now, well, I also wanted to pitch a screenplay that I had to Weinstein. So of course I’m not going to go after the guy. It’s sickening.

Mike Papantonio:             So rather than being journalists, look, I, you know, I say it again, investigative journalists are a thing of the past and investigative journalism in America is dead. If it weren’t for documentaries that tell these kinds of stories, these stories are never told because you’ve got journalists that A, I wonder this these days. I really do wonder whether it’s intellectual capacity to understand that this is a story. That’s the first thing. Then I wonder how much we’re hearing, oh gee whiz, they’ve cut the news departments. We can’t do stories like this. This is an important story.

Mike Papantonio:             Here you have Weinstein that is hiring these flying monkeys to go after these women that he’s raped. And the, the excuse that the document, you know, apparently reads like a fifth grader wrote the document. So anyway, I, I just, it’s just another instance where I go, they did the same thing with Epstein, didn’t they?

Mike Papantonio:             Access, I’ve got to have access. So yes, I’m willing to let this guy who we know raped children, 14 year old, 15 year old children, we’re going to let it go because we really want access to his friends. And we don’t want his friends to get mad at us as journalists because they’re probably not going to give us another story. Ugly, ugly story, I’ll tell you.