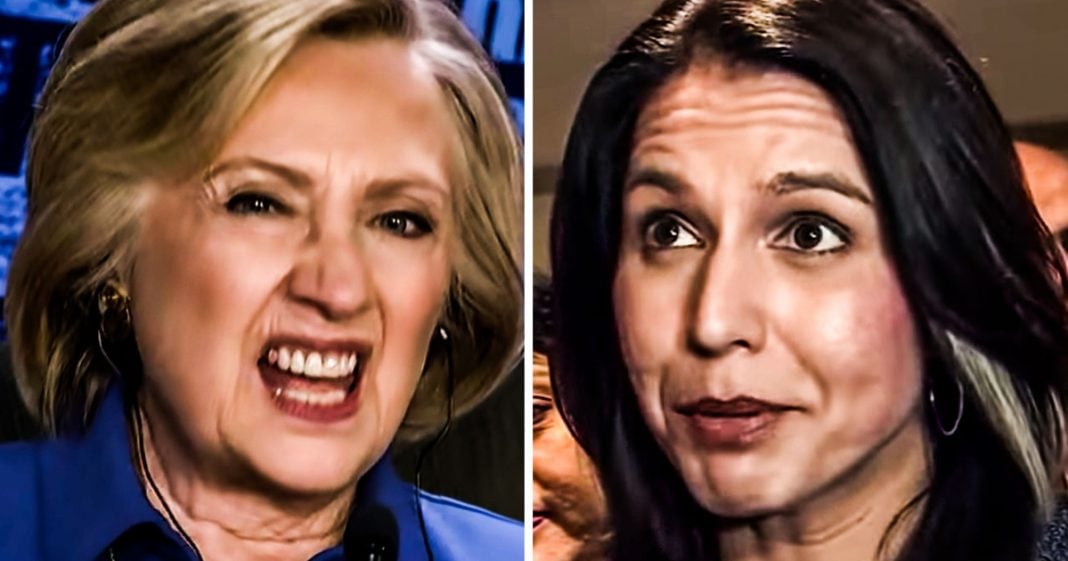 Representative Tulsi Gabbard has announced that she is suing former Secretary of State Hillary Clinton for defamation for comments that Clinton made during an interview several months ago. In that interview, Clinton implied that Gabbard was a “Russian asset”, though she did not mention Gabbard by name. But that isn’t necessary for a defamation case, as Ring of Fire’s Farron Cousins explains.

Yesterday, Tulsi Gabbard filed a defamation lawsuit against Hillary Clinton over Hillary Clinton’s claims and a podcast from October that Tulsi Gabbard was actually a Russian asset. Now, this news broke yesterday. Twitter are ruptured with it. A lot of people congratulating Tulsi praising her for this. A lot of them talking down to her saying, this is stupid and it’s going to go nowhere. But coming from a legal standpoint here, the argument of this lawsuit isn’t going to go anywhere, doesn’t hold any water. I’ve seen some hugely intelligent people, people I admire on Twitter saying, well, Tulsi can’t Sue her for defamation because Hillary didn’t mention Tulsi by name when she was talking about these horrible things, and I’ll read the quote in a minute, but let me go ahead and clear this up right now. You can Sue somebody for defamation and win. By the way, even if they don’t mention you by name, if the audience is able to infer who you are talking about, it still counts and it holds up in a court of law.

So that argument that she didn’t say or name that doesn’t hold up in court, not to mention the fact that the interviewer said her name and then Hillary Clinton agreed. So even further proof that that argument isn’t going to hold up. So without further ado, here is what Hillary Clinton had to say about Tulsi Gabbard back in October on this podcast. They’re also going to do third party. I’m not making any predictions, but I think they’ve got their eye on somebody who’s currently in the democratic primary and are grooming her to be the third party candidate. She’s the favorite of the Russians. They have a bunch of sites and butts and other ways of supporting her so far. And that’s assuming Jill Stein will give it up, which she might not because she’s also a Russian asset. Yeah, she’s a Russian asset. I mean, totally. They know they can’t win without a third party candidate, eh.

I support this lawsuit. I do. I absolutely do. I did kind of go back and forth on it, but reading Hillary Clinton’s words out loud yet again, go for it. Sewer, because I’m sick and tired of these nonsensical Russian asset talking points coming from these establishment types. Anytime, whether it’s online, whether it’s in person, you say something they don’t like automatically you’re a Russian asset. We don’t believe you. You’re a bot. You’re gone. You’re stupid. Putin is paying you some blah, blah, blah, blah, blah. That’s all they have anymore because they can’t sit and argue policy. They can’t sit and have a rational, intelligent conversation anymore. Everything bad that’s ever happened in their lives is because the Russians somehow did it to them and it’s time for that nonsense to stop.

You cheapen the arguments. You cheapened discussions by just throwing that out there and thinking that that’s the end of it. That’s a cop out. Come up with something better. You want to defend a candidate or you want to attack a candidate like Hillary did, but Tulsi then go after her policy. There’s plenty of things to go off with that, but you didn’t go that route. You went the immature, childish route trying to make yourself seem a little cooler. And yeah, I know that Tulsi Gabbard is mostly doing this as an attention grab. Maybe she is planning to be a third party spoiler. Who knows? We’ll find that out when we get there, but I do think she wants a little bit more attention now. Her campaign is failing. She’s not running for reelection in the house. So once this ends, what she gonna do, she doesn’t know. Or at least we don’t know if she knows. So yes, this is another grab for relevance, but even the right thing done for the wrong reasons is still the right thing. And that is exactly what this lawsuit is. It is the right thing. She does have standing. She does have a legal argument and the defamation rules say that she can absolutely Sue Hillary Clinton for this, even if she didn’t mention her by name. Personally.