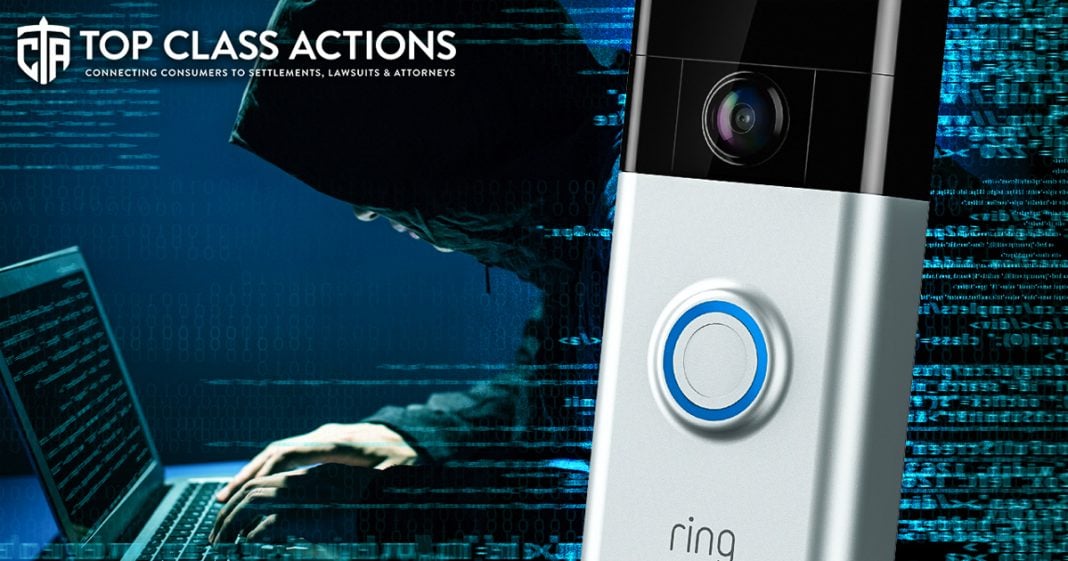 Ring LLC has been hit with a class action lawsuit by consumers who claim that the home security company allows hackers to access their system and spy on them in their own home. On Dec. 4, 2019, the plaintiffs claim that the camera started live streaming and the song “Tiptoe Through the Tulips” began to play via the two-way talk feature of the device. Then, a hacker started talking to their daughter and started shouting racial slurs at her, the Ring class action lawsuit states. Ring of Fire’s Farron Cousins discusses this with Scott Hardy, the President of Top Class Actions.

Farron Cousins:                  In the past few years, people have been getting serious about their home security. And with the advent of these doorbell cameras, the house cameras you can put on every corner floodlight cameras, you no longer have to go through some kind of big company and pay a monthly fee. You can buy it and install it yourself and you’re good to go, for the most part. And as our homes have become more high tech with these security cameras, hackers have unfortunately found a way to get inside those as well. Joining me now to talk about what’s happening is Scott Hardy with Top Class Actions. And Scott, Ring LLC, is obviously one of the most popular makers of these, the, the doorbells, obviously the floodlight cameras, the stickup cameras, you put them in your house, outside your house everywhere, and they’re actually the subject of a class action lawsuit now because their security is so weak, hackers have been able to get into these cameras and, and well take it from there. This, this is horrendous.

Scott Hardy:                          Right. Well, you know, Amazon is, you know, owns Ring and Amazon is really pushing everybody to get the Ring cameras. Like you said, put the Ring cameras up on the floodlights, use them inside your house, use our Ring doorbell, put it everywhere. And, you know, it’s, it’s great. It’s ubiquitous. It’s gotten inexpensive to have cameras all over your house and to keep an eye on things. But these things are, you know, wireless network devices, they’ve got speakers built in. I got to think that when I, when I was a little hacker when I was 15, 16, and you know, a little older, oh my gosh, I would have had a ball with these devices. And that’s exactly what these hackers are doing. You know, people have these cameras in their house, they’re using it as a nanny cam, and these people are cracking into the accounts of users and scaring these kids.

They’re going, oh, I’m watching you. Or they’re playing music. You know, they’re, they’re really creeping out these people who, who I’m guessing, and this is purely a guess, don’t have their accounts completely locked down. And so they’re saying, hey, you know, Ring, you need to make these accounts more secure, you need to do more to safeguard this data. You need to make sure that someone who’s, you know, driving through your neighborhood and sniffing wifi hotspots and seeing if there’s anything that they can access that, that make it much more difficult for a hacker to get access to. And we’ll see what Ring does because the PR on this has been terrible for Ring.

Farron Cousins:                  And, you know, just to add to your point there, because you’re talking about the two factor authentication. You also mentioned people driving around looking for wifi hotspots. Put a password on your wifi. I don’t know if it’s still a thing that people don’t do that, but in the event you don’t, you know, maybe set one up for a family member that’s not too tech savvy. You didn’t want to have to have them do a password. No, fix it, fix it now. Every wifi in this country should have a password on it. Don’t ever think that it’s okay to not have one. Trust me, it’s going to end badly for you or for whoever’s wifi you have set up. Put the password on there and do the two factor authentication because, you know, it may be fun. Some of these people, it may not even be that malicious.

It is, like you said, they kind of want to scare people because yes, it would be rather freaky to walk past your camera and have it say, ha ha, I see you. But there’s also more malicious things that could happen with this that may have happened. You know, these are in people’s homes. It’s not just on the outside. Like you said, they have them now where they sit up near your TV, you can put them in your bedroom. That’s where things take a voyeuristic turn for some of these hackers and that is a big reason why people have to do everything they can to protect themselves because as we see these companies, they’re not going to do it on their own. They’re not just going to say, oh, by the way, we’re going to do the right thing. No, we’re going to do the cheap thing. We’re going to do the fast thing. We’re going to sell you a product that does work, but you know there’s a backdoor to it and unfortunately everybody has a key to that back door.

Scott Hardy:                          Right. Well, and just like you’ve got big companies that are selling your marketing data and your behavior out to anybody who will buy it, you’re going to start seeing people who are going to start marketing and selling your presence data. Hey, are you home right now? You know it’s in theory, you could actually start a marketplace where people are selling this data to know where people who live in these homes are, are not there. So crooks can go in there and rob them. There’s a lot of things that you could get from this data, people are monitoring these cameras, and so the number one thing you can do to help make it more secure is turn on two factor authentication. Turn that on for your Nest account, for your Ring account, for your Google account, for your Amazon account.

Turn on two factor authentication. Your banks that should already be turned for. That will greatly help reduce the risk that hackers will be able to access your accounts. Because my guess is that these people use the same password that was compromised. So they must use the same password on a website that was hacked and then that was the same password they use for the Ring account password. So you’ve got hackers that are just sitting there accessing all these passwords and they’re trying to get an all these different accounts. And if you don’t have two factor authentication, they’re going to be able to get in.

Farron Cousins:                  Right, and, you know, that just kind of, we’ll leave with another warning, change your passwords regularly. Do not use the same passwords for every single site out there. And if you get worried about it, write it down. Don’t put it in a digital document by any stretch of the imagination. Write it down on a piece of paper that you keep somewhere secure inside of your home to where nobody else can grab it or see it. And if you can come up with a nickname for sites that only you will recognize so that if somebody did get their hands on it, they’re not going to know what that nickname means. That’s just my personal advice. Hopefully people follow the other tips that you’ve given, which were much better than what I’ve had to suggest, but nonetheless, if you have been affected by any of this, if you have these devices, I do encourage everyone, follow the link in the description of this video. Head over to Top Class Action. Arm yourself with all of this knowledge and of course, subscribe to their weekly newsletter. Scott Hardy with Top Class Actions, always a pleasure talking to you. Thank you.