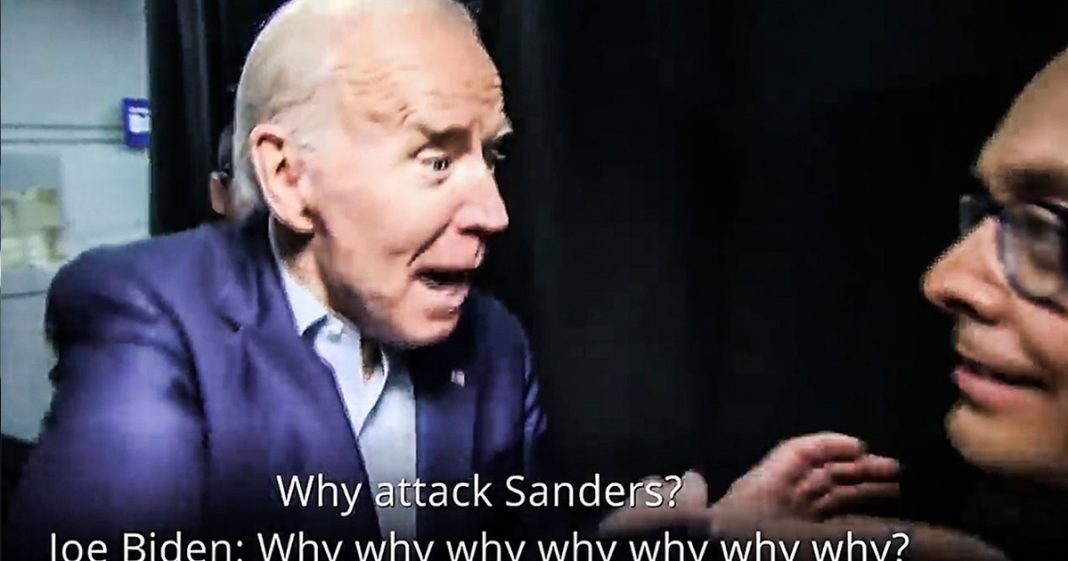 After an event this week, reporters were trailing Joe Biden, hoping to ask a few questions. But when one reporter asked about Bernie Sanders’ apology, Biden appeared to have a miniature freakout, mocking the reporter and then patronizing him for asking the question. Ring of Fire’s Farron Cousins explains why this further shows that Biden is not fit to be the President of the United States.

Yesterday after an event, former vice president Joe Biden, was approached by CBS news reporter Ed O’Keefe. O’Keefe wanted to ask about Bernie Sanders, a apology to Biden and apology that Biden absolutely did not deserve and Bernie should not have issued, but nonetheless had O’Keefe wanted to ask about it, and Biden for some reason went off the rails and gave a response that put it this way. If Trump had done that, we’d be talking about it nonstop for the next few weeks. Take a look at what Biden did here.

Ed O’Keefe:                   Well, this debate yesterday, you said you accepted Bernie’s a politician. You’re attacking him. Why are you doing that? Why wasn’t his apology enough? Why didn’t, why attacks?

All right, let’s break that clip down for just a minute. Ed O’Keefe. Yeah, he’s asking lots of questions and they all do start with the word. Why? Why is he doing this? Well, because he’s a reporter and that’s his job. This guy was just doing his job and Biden had this freak out while by, by my mama, ma. Calm down, dude. No, Joe, you’re the one who needs to calm down. You’re the one who just freaked the hell out on this guy doing his job. It’s like if you walk into a Starbucks and they start asking you like, Oh, well do you want whipped cream on this? Do you want sugar? Do you, I mean, do you go to them? Go, why my mom? Am I calm down? No, it’s a person just doing their job, but you freak the hell out on this guy. And then you mocked him. You patronized him with the whole calm down. It’s okay. Then you gave him that weird little punch at the end. And you know, the thing I find striking about this is for Biden to come at him with that deranged face and that why blah, blah blah, by making fun of him.

Joe Biden’s, the guy who we found out a couple months ago had a stutter, remember? And so it was, Oh God, you can’t, you can’t talk about this with Biden now. You can’t talk about his missteps when he’s speaking cause he has a stutter and he’s still even at his age, you know, trying to overcome it. Yet here he is mocking someone else. That’s not okay. You can’t say that. Oh no, no, no, no, no please. He, he has a mild speech impediment and then the guy with a mild speech impediment goes and makes fun of somebody else. Know that that makes you a jackass and that opens you up for it.

Joe Biden’s on hinged on, I’m not kidding when I say that, if Donald Trump had reacted this way to a reporter, every, every, every news outlet in this country would be talking about it for the next week straight. We’d be talking about, Oh my God, he’s so close to physically assaulting the press. Look at this, look at this deranged behavior from him. But because it’s coming from Biden, people have already moved on from this story and that’s not how this works. Donald Trump is crazy. Yeah. But honestly, I don’t think personally that Joe Biden is that far behind him. And I think Biden who is prone to missteps like this, and this is lashing out at the press, which we all have attacked Trump for relentlessly. We got to hold Biden to the same standard. We’re not going to give him a free pass just because he’s a Democrat. You can be a bad person and still be a Democrat. You can go through horrible family trauma and still be a bad person. And honestly, at this point, I think that’s what we’re looking at with Joe Biden.