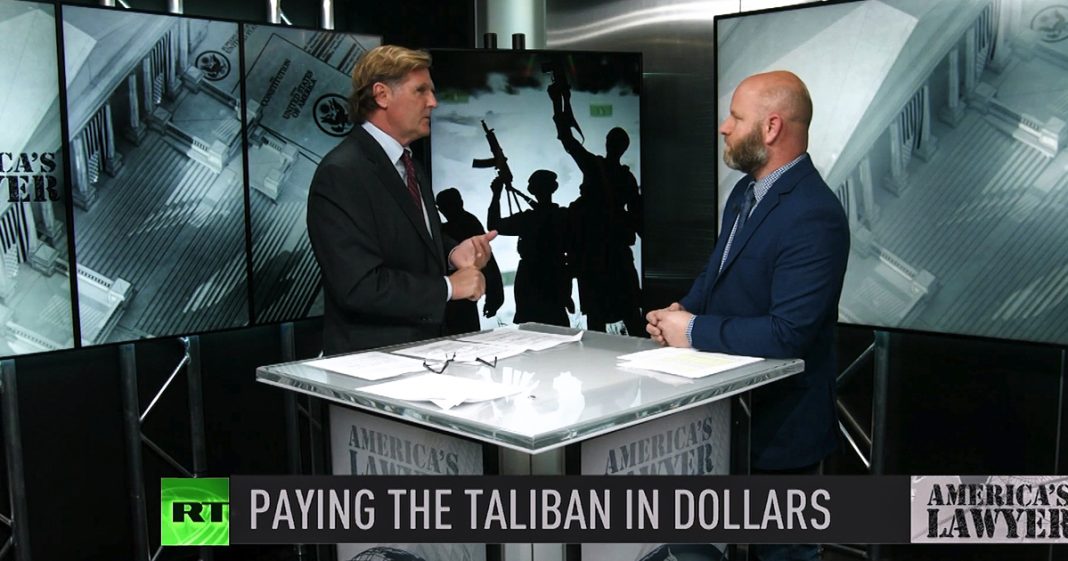 Via America’s Lawyer: Mike Papantonio and Trial Lawyer Magazine editor Farron Cousins walk us through accusations against U.S. defense contractors, alleging they are paying off the Taliban in ‘protection fees’ while knowing full-well that these funds are being allocated toward the killing of American soldiers abroad.

Mike Papantonio:             Defense contractors working for the US military had been accused of paying off members of the Taliban to protect them in the Middle East. But a new lawsuit says that this money has been used to kill US soldiers. I have Farron Cousins from the trial lawyer magazine to talk about this and other stories. Farron, first of all, we’ve seen the same type of, I brought a similar lawsuit against the against banks, US all the banks that were washing money for terrorists, knowing that they were washing money. Pled guilty, actually nobody was, nobody was really punished, but they admitted that yes, we were washing money for terrorists. We understood that the money was going to be used in directly or indirectly to kill Americans and of course our justice department under Eric Holder and Loretta Lynch prosecuted nobody. So here we have a different scenario of that, don’t we?

Farron Cousins:                  We, we do. What we’re finding out, in fact, actually, let me back that up. What we found out 10 years ago in 2010 the summer of 2010 this story broke all over in US media. That these contractors that we are paying to be over there in the Middle East had been paying protection money to the Taliban. They understood, and they even said this in interviews, if we give them money, they “don’t F with us at all.” So they know that we just give them a little money. It’s like the mafia. We give them a little money, they do not mess with our operations. We make tons of profit. The Taliban gets their money and we go on. But this story actually broke in the summer of 2010. So just as you said, Eric Holder did nothing about the banks doing this. He did nothing with this information at the time. We could have gone after and immediately started prosecuting these people because these kinds of payments are illegal. We’ve seen prosecutions for it in the past with Chiquita Banana, down in South America. But holder said, no, I’m not going to touch these guys either.

Mike Papantonio:             Okay, well here’s what Holder knew. Here’s what Loretta Lynch knew. This is why this is so disgusting to me. This is the most inept department of justice maybe we’ve had in a long, long time. And that was Loretta Lynch knew in the bank case that HSBC had been washing money. They had the whole thing laid out for them. It was all the evidence was there. All the moving parts were right in front of the department of justice, HSBC and other banks even signed off and admitted, yes, we did these things and not one of them was prosecuted. So given that, the only question is now, so this has been going on, this was also going on during the, during the Eric Holder years, but we’re not seeing any, anything different out of the Trump years, are we?

Farron Cousins:                  So we’re talking about three different administrations and their DOJ’s, you know, Trump’s entering his fourth year now. They knew about this the entire time he has been in office and we get absolutely nothing, possibly because of part of the revolving door carousel of administration officials.

Mike Papantonio:             Okay. So, to distill it, here it is. We’re a corporation. We only care about our shareholders. So yes, we’re willing to give money to people that we know are killing American soldiers and other American contractors, by the way.

Mike Papantonio:             But what’s important to us is that we report to our shareholders that we weren’t closed down by Taliban activity. That’s how ugly the story is.

Mike Papantonio:             So as the CEO, who makes that decision, obviously the CEO’s making a decision for himself or herself. I get a bigger bonus. We didn’t close down. Yes, we paid off these, these murderous thugs who are killing Americans. But it’s okay. It’s all right because they don’t shut us down. And the department of justice says, looks at it and they say, yeah, it looks like good business in America.

Farron Cousins:                  Well, and part of the way they got away with this for so long is the fact that they were actually using their subcontractors to make the payments. So it wouldn’t look like these corporations were directly handing cash, which is what happened in some instances, to members of the Taliban. So they write it off. We had to pay a subcontractor to come and do this job, but instead it’s not actually a job. It is go deliver this bag of money to these warlords over here so that we can keep doing business.

Mike Papantonio:             Yeah. American capitalism gets really sketchy sometimes. This is a good example of them.