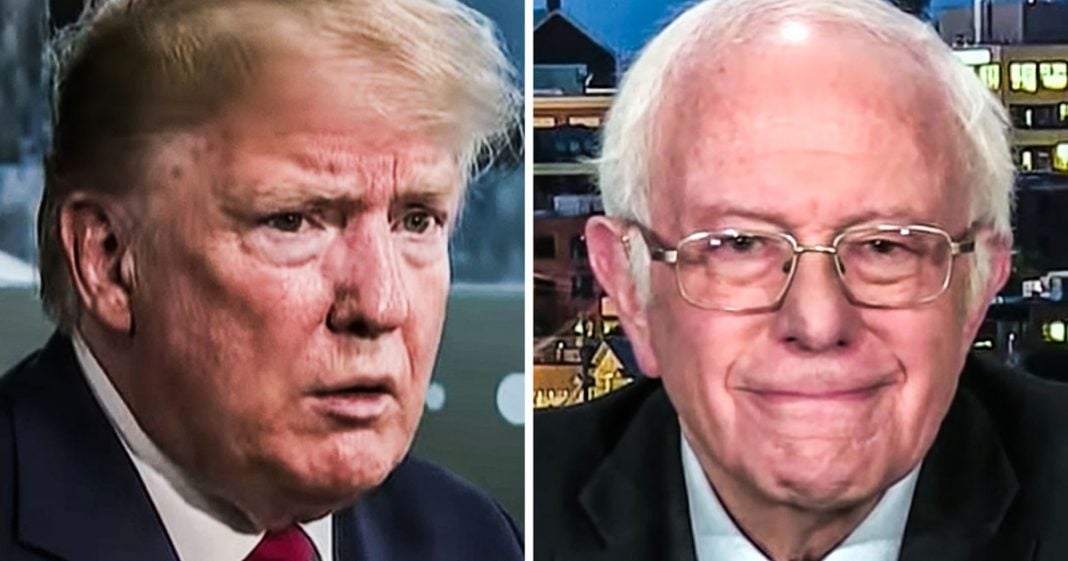 The latest round of polling shows, once again, that Bernie Sanders is the best suited to beat Donald Trump, holding a nine-point lead over him nationally. But let’s not lose sight of what else is important – it isn’t just about beating Trump, it is about changing the way this country operates so that it benefits everyone and not just those at the top. Ring of Fire’s Farron Cousins discusses this.

Polling data over the last few months has consistently showed us one thing and that one thing is that nobody beats Donald Trump. Like Bernie Sanders beats Donald Trump. The latest poll released yesterday showed that Bernie Sanders has a nine point lead nationally in head to head match ups against Donald Trump. That is the highest of any other democratic candidate. Second place is Joe Biden who beats Donald Trump by seven points. A Buttigieg and Warren beat Trump by four points. Klobuchar loses to Trump by three points and Gabbard loses to Trump by five points. So Klobuchar and Gabbard shouldn’t even be a part of the conversation at this point. They can’t beat Donald Trump. All these numbers will change. But here’s the thing. Yeah, they’re going to change except for the fact that with Bernie Sanders, they haven’t. We have seen polls in the past showing that Elizabeth Warren either ties or loses to Donald Trump nationally. We have seen polls in the past that say the Joe Biden beats him by three points nationally.

But in every one of these polls over the last couple of months here, everyone has showed that Bernie Sanders not only beats Trump nationally, but beats Trump greater than the margin of error. So even if you subtract or add that margin of error to either of those scores, Bernie still wins and he is the only one who was consistently fallen into that category. Bernie beats Trump. So all this talk about Biden being the most electable. That’s trash. That’s an absolute nonsense argument based on absolutely nothing. Bernie beats Trump. Bernie beats Trump by the biggest margins. Bernie beats Trump consistently. Bernie is the best hope. If the goal is to beat Donald Trump, but here’s the catch. That’s not the only goal. It’s not just about beating Donald Trump. If it were any one of these candidates that’s beating him right now would do, right. You could go for Biden or Warren or Buttigieg cause beating Trump is only half the battle.

The other part is changing the way this country operates, changing the power structures in this country. You’re not going to get that with Biden and you’re certainly not going to get it with Buttigieg. And you wouldn’t even get it with a club, a char. But that’s mostly because she doesn’t even beat Trump and matchups. You get it with Bernie, you get a little love it. Yes. With Elizabeth Warren too, you hit more of it with Bernie and that’s why that’s what we need. Our healthcare system is flawed beyond recognition. So as our student loan system, so are these areas of the country that haven’t raised the minimum wage and over a decade that’s backwards. So was our tax system that gives everything to those at the top and screws over everyone who’s not in the top 1% that has to change and there’s only one candidate that is going to change all of those things in the way that they need to be changed.

He’s coming to the negotiation tables being as far left as possible. So even if he concedes, we’re still going to get a really, really leftist policy. But for those kind of center left a little bit. When they come to the negotiation table, they have nowhere to go but closer to the center, possibly past it and over to the right. Then we end up with the same garbage we have today. That’s not okay. That’s why we have to go to the extreme sometimes cause we know concessions will have to be made. And if you’re as far left as possible, making some concessions is still going to leave you pretty far over on the left. But if you come to the negotiation table from the middle, you have nowhere to go. But to the right. And that’s another reason why Bernie is the best choice. He beats Trump.

He provides us with the change we need so that we can live better lives. Not only is he beating Trump in these head to head match ups, the new polls are showing that he’s surging in Iowa. He has a huge lead in New Hampshire, a big lead in California. He is gaining support among women. I believe one of the latest polls we saw, he actually has the highest, uh, polling numbers of women in this country. So there goes your Bernie bro talking point. He is surging with African-Americans. He is gaining more endorsements. We saw one from South Carolina yesterday. Huge, by the way, because South Carolina is a big one in the primaries. Switch from Biden to Bernie because they see the writing on the wall as well. If you want to beat Trump, Bernie is the best bet. But if you want to fundamentally change the country, Bernie is the only bet.