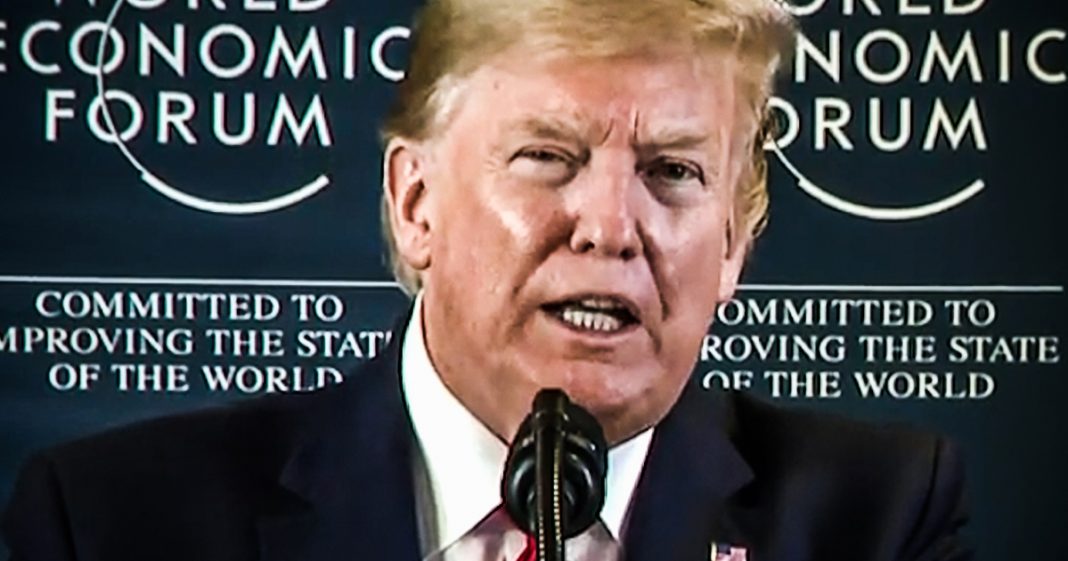 Donald Trump is clearly still angry about losing out on Time Magazine’s Person of the Year to climate activist Greta Thunberg, and he mentioned that fact during a press conference at the economic forum in Davos. When asked about Thunberg and the environment in general, Trump launched an incoherent attack on Thunberg followed by even more nonsense about “environmental numbers.” Ring of Fire’s Farron Cousins explains what happened.

Well, right now, Donald Trump is at the Davos Summit and he’s still apparently angry that climate activist, Greta Thunberg, is the one who won Time Magazine’s person of the year last year. And we know that because he pretty much told reporters that during an impromptu press conference, that immediately after Trump was asked about Thunberg, went completely off the rails exposing not only how petty Trump is when trying to compare himself to a 17 year old girl, but also how crazy he truly is. Take a look.

Donald Trump:                    No, not at all. I think what is, I think aspects of it are, uh, I think that some people are, they put it at a level that is, you know, unrealistic, uh, to a point you can’t live your lives. We want to have the cleanest water on earth. We want to have the cleanest air on earth. Our numbers, as you saw, we had record numbers come out very recently. Our numbers are very, very good. Our environmental numbers, our water numbers are, our numbers on air are tremendous. We have to do something about other continents. We have to do something about other countries. Uh, when we’re clean and beautiful and everything’s good. But you have another continent where the fumes are rising at levels that you can’t believe. I mean I think Greta ought to focus on those places, but we are doing better right now than we’ve ever done in terms of cleanliness, in terms of numbers. Uh, we have a beautiful ocean called the Pacific ocean with thousands and thousands of tons of garbage flows toward us and that’s put there by other countries. So I think Greta has to start working on those other countries.

Yeah, folks our numbers are, our water numbers. Wow. Have you seen those water numbers? That’s a lot of numbers for a lot of water. Same thing with the air. There’s air all around us and there’s numbers for that I guess too. But the truth is our numbers are horrible, but Trump’s not actually saying what the numbers are. He’s not saying if they’re up or down, just that they’re tremendous. Under the Trump administration for the last two years, the levels of air pollution here in the United States have increased for the first time in almost a decade. We’ve actually seen an increase in the amount of pollutants that we’re putting out into the air here in the US. So when he sits there blaming these other countries for things like this, yeah, other countries are, are pretty bad too, but we’re actually one of the few countries that’s getting worse. We had been getting better. We had been doing the right thing. We had regulations in place that cutting back on some of these, Donald Trump himself is the one who got rid of those because they were put in place by Barack Obama and we can’t leave anything in place if Obama has his name on it. Trump killed them. Now we’ve got rising emissions. We have dirtier water. We have more than 3000 water districts here in the United States with levels of lead higher than that found in Flint, Michigan, who also by the way, still doesn’t have clean water.

And it’s all somehow everybody else’s fault, right? We’ve got this big beautiful Pacific ocean and they’ve sent their garbage patch over here to us to, I don’t know what, maybe it’s going to attack us, I don’t know. But you’re going to sit there and act like none of that garbage in the garbage patch comes from the US, that’s insane. But so was your entire little rant here and the part about Greta Thunberg, that’s just insane. First of all, yeah, you’re still pretty bitter about not getting person of the year, but here we have this young woman who has done amazing things, remarkable things at 17, 16 years old, standing up to world leaders, something that we see 60 and 70 year old men not willing to do, but this young woman did it and she wasn’t scared and she didn’t back down. And she’s still at it right now in Davos doing this, telling the most powerful people in the world, both, both politically and financially, that you gotta change. You gotta be better. You got to stop this. Trump wouldn’t do that. Plenty of people in the House and Senate wouldn’t have the courage to do that, but Greta does, and she absolutely deserved that honor of being person of the year. And nothing Trump has done should be remembered as decent. This is a horrible human being who has enacted horrible policies that are sending roughly 1400 people in the United States each year to an earlier grave, just because he didn’t want Obama’s name on environmental regulations.