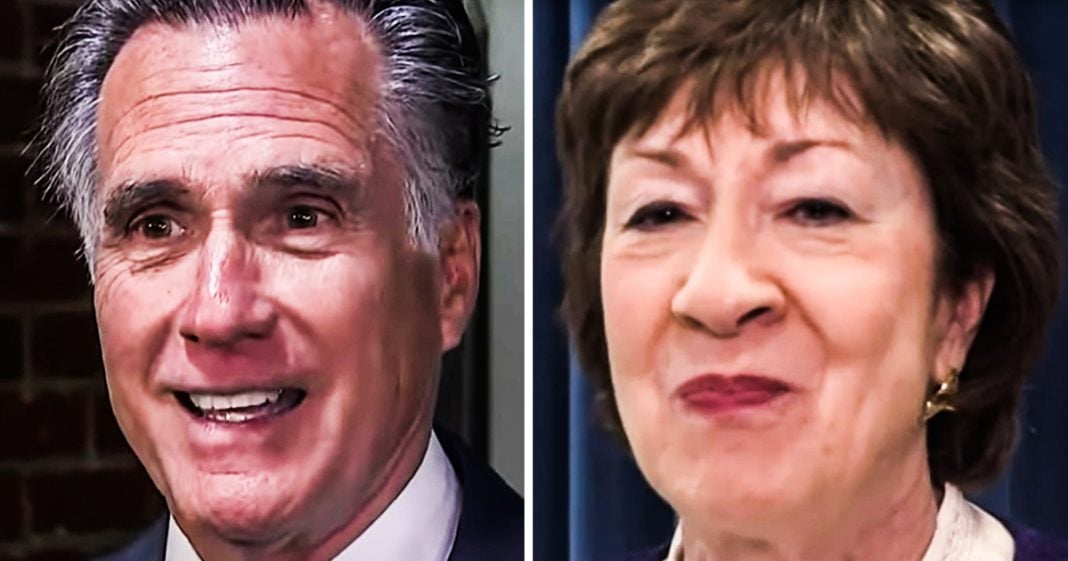 In what shouldn’t come as a surprise to anyone, Republicans in the Senate unanimously voted to block both evidence and witnesses in the impeachment trial of Donald Trump. This vote came after weeks of media speculation about Republican Senators being “on the fence” and some even openly saying that they wanted witnesses. In the end, these Republicans showed us what they care the most about, and it isn’t the rule of law. Ring of Fire’s Farron Cousins discusses this.

Well, folks, yesterday was the first day of the impeachment trial in the United States Senate. Most of it was spent on procedures. How are we going to do this? How are we going to do that? It stretched on for 13 hours going until 2:00 AM in the morning when they were finally allowed to go home, get a little rest, and then started all over again today. And in what should come as a surprise to absolutely no one, every single Republican in that chamber voted against the democratic measures to subpoena Donald Trump’s administration, to call certain witnesses. Every single Republican voted against those measures. And I know I seem a little smug about that and maybe it’s because I am, because this is one of those times where I get to have yet another, I told you so moment, because folks, I told you so. I told you these Republicans weren’t going to break ranks.

Even Mitt Romney, who last week was saying, you know what? I think I would like to hear from John Bolton. I think, yes, I should. Yeah, you just voted to not specifically subpoena John Bolton. You had the chance, you said you wanted to do it and then when it came down to vote for it, you did exactly what I said you would and you voted to not subpoena John Bolton and you voted to not subpoena Mick Mulvaney and Pompeo and did not subpoena the State Department. Every single Republican voted along with Mitt Romney there, including the other two that the media has been telling us, ooh, maybe they’re going to be on our side. Lisa Murkowski, Susan Collins. Oh, they’re not happy with Mitch McConnell, but they damn sure voted with him on every single measure. That’s exactly what we could have predicted. From this point forward, there is no reason to even bother with this impeachment hearing. There isn’t folks, there truly honest to God isn’t.

Don’t watch it. Read about it the next day, but don’t waste your time sitting there for hours and hours and hours and hours and hours watching this nonsense on TV. Read a summary of it the next day. Take five minutes instead of 13 hours and then move on with your day. We know the evidence. We know what this president has been accused of and it’s pretty obvious the man is guilty as hell. So is Rudy Giuliani and Pompeo and Mulvaney and Devin Nunes. We know that none of them are going to be held accountable for this. So if you care about your own personal mental health, your blood pressure, don’t pay attention to the hearings. Read about it the next day and move on. You’re going to save yourself a lot of anger and frustration because this is already playing itself out exactly as we told you it was going to play itself out. The Republicans won’t break ranks. They’re going to stick to their Trump did nothing wrong, and even if he did something wrong, it’s still technically not wrong and that’s gonna, that’s going to be what it is. That’s going to be what it is, folks. I saw so many articles on so many different websites today, all different, yet all the same. The four big wins of the Democratic party in the Senate on Tuesday, the five big wins, the best thing Democrat. Who gives a crap? Yeah, the Democrats had a couple victories yesterday.

You get your 24 hour period of opening statements now spread out over three days instead of two days, oh wow. Go ahead and stick a fork in Trump then, right? He is done. It’s nonsense. It’s political theater. Don’t waste your time on it. As I said, find something better to watch. Take care of yourself by not letting yourself get so angry and frustrated by watching this nonsense and just wait until the next morning, read a decent quick little summary on it and just expect for nothing to happen to the president of the United States because these Republicans have made it clear, they’re not going to hold him accountable at all.