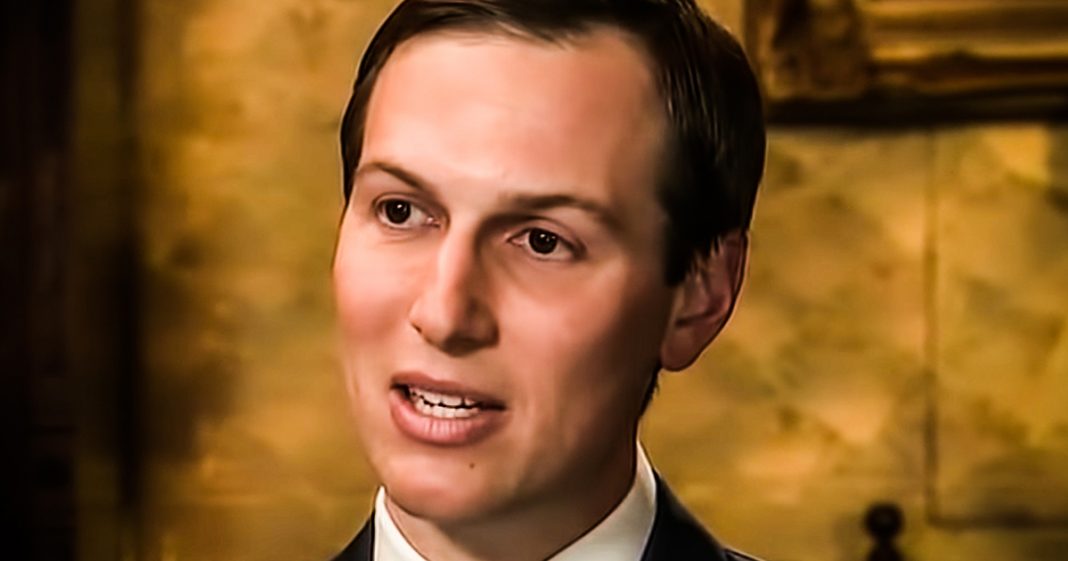 Jared Kushner’s use of WhatsApp to allegedly message world leaders about policy issues has been well-documented. But with recent reports alleging that the Saudi Royal Family hacked into Jeff Bezos’ phone via his WhatsApp account, this raises very serious national security concerns about Kushner, who was also messaging members of the royal family. If they can get into Bezos’ account, they can certainly get into Kushner’s, as Ring of Fire’s Farron Cousins explains.

Jared Kushner is now and has been ever since the first day he stepped into this administration, been a massive national security threat. As the Intercept reported all the way back in 2018, Jared Kushner had been using the WhatsApp app on his phone to talk to foreign leaders. And according to Jared Kushner’s own lawyer who spoke to Congress about it last year, yes, Jared Kushner was speaking to foreign leaders through WhatsApp and they were talking about policy. Now first and foremost, yep, that is clearly a violation of records laws. And Jared Kushner should have immediately been removed from this administration if there was any fairness at all in this country. Four, unfortunately there is not, Kushner still there. But here’s the thing, one of the people that Kushner was texting with on WhatsApp was Mohammed bin Salman, the crown Prince of Saudi Arabia, who just yesterday a massive report in the Guardian accused bin Salman of being the one to hack Jeff Bezos’ phone through WhatsApp.

And they hacked Bezos’ phone, according to this report on the Guardian, allegedly. So let’s see, you know, throw that word out so we don’t get in trouble here. Allegedly hacked his phone, got the naked pictures, found out he’s having an affair. Gave it all to David Pecker over at the National Enquirer and Pecker had been friends with bin Salman. They had been communicating back and forth prior to receiving all this information about Bezos. Then he gets it, publishes the story. Bezos launches a massive investigation. They had determined back then, I think it was about a year ago that it was Saudi Arabia that did it. Trump administration said, you’re crazy. Saudi Arabia said you’re crazy. The Guardian launches a huge investigation and they found out, oh yeah, allegedly it was the Saudi Royal family through WhatsApp, the same app that Jared Kushner was using to talk to these people about policy and more importantly talk to other people in other countries about policy. You see Saudi Arabia had really nothing to gain from hacking Jeff Bezos and leaking that story. Right? I mean, what material good did they get out of that? Now, on the other hand, if they were to do the same thing to Jared Kushner through that very same app, because clearly they know how to do it. They would get material goods out of that. They’d get secrets, they’d get plans, they’d get plots, they’d get information that other countries would pay through the nose to get.

And if you think that Saudi Arabia didn’t at least think about doing that to a guy like Jared Kushner, then you are kidding yourselves. Jeff Bezos understands technology and the fact that he was able to be hacked should kind of worry us all about our own personal information too. But Kushner, I’d be shocked if Kushner even knows how to turn on his own phone. He probably has Ivanka have to do that for him. She’s probably the one that has to charge it at night because he doesn’t even know that that’s how phones work. So yeah, it’s incredibly plausible that Kushner’s phone could have also been hacked, maybe not by the Saudi Royal family, but quite literally by any of the other foreign leaders he was talking to on WhatsApp. This guy is a national security threat to this country, and the fact that he is still sitting in that administration, the fact that we haven’t had more in depth hearings in Congress about this particular issue is almost as frightening as the secrets Jared Kushner may have accidentally leaked.