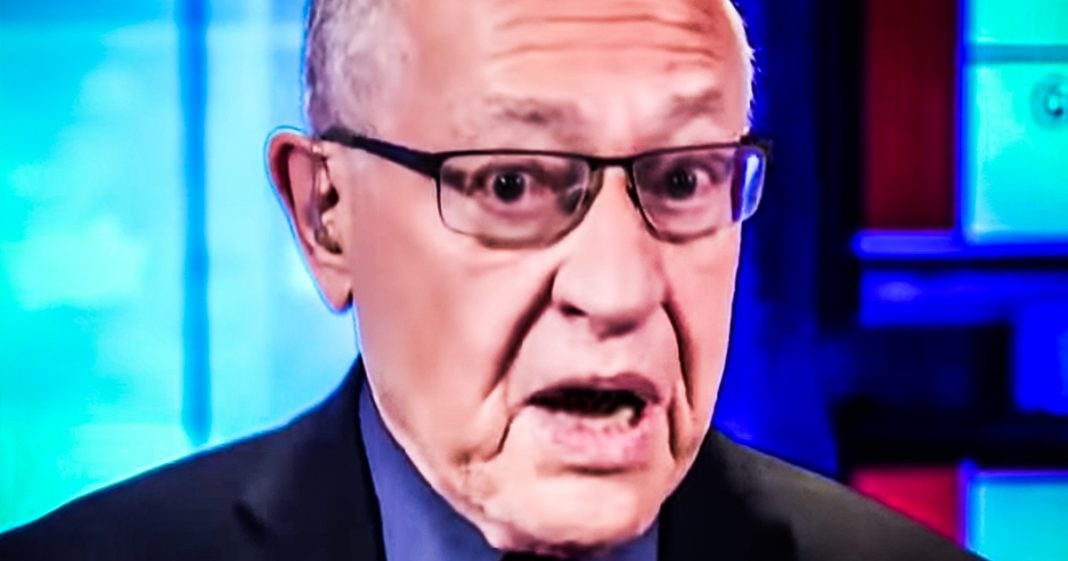 Alan Dershowitz, the latest addition to Donald Trump’s legal team, once said that abusing the trust of the public was an impeachable offense. Today, he believes that abuse of power is NOT an impeachable offense. Dershowitz’s past statements have been buzzing around the internet ever since Trump announced that he would be part of his legal team, but Alan has already undermined his arguments with his past statements. Ring of Fire’s Farron Cousins discusses this.

Late last week, Donald Trump unveiled his legal team for the impeachment trial and included people who, uh, like Pat Cipollini who was actually going to be the lead counsel for Trump. He is the white house counsel. It’s got Ken Starr from bill Clinton’s impeachment. And of course it has Alan. I kept my underwear on the entire time. Dershowitz now Dershowitz’s already running into a lot of problems here and not just because of his relationship with Epstein and his pending, uh, investigation and possible trial for being involved with Epstein. No, no, no, no, no. Uh, Dershowitz has other problems too. And those problems came in the form of this weekend of a 1998 interview where Dershowitz said back then that abusing the public’s trust, abusing the office of the presidency itself was an impeachable offense. Now, the reason this is important is because ever since Friday, Dershowitz has been making the rounds on any cable network, willing to have this disgusting elderly lawyer come on.

And every time Dershowitz is going on TV, he is said abuse of power is in a crime. Even if Democrats prove that he abused his power, it’s not an impeachable offense. We should all move on. Nothing to see here. Let’s go home with 22 years ago, Dershowitz said the following, it certainly doesn’t have to be a crime. If you have somebody who completely corrupts the office of president and who abuses trust and who poses great danger to our Liberty, you don’t need a technical crime. But now he’s saying you do need a technical crime and that crime is not a technical crime because abuse of power is in fact, ladies and gentlemen, a crime. I don’t care how many times Republican say that it’s not. It actually is. So we has been accused of a crime, but Dershowitz says, even if you prove he did commit that crime, that’s not a good enough crime.

You better come up with a better crime or else we’re gonna acquit him. But 22 years ago I said that even just embarrassing the office of the president. Sure. Who that’s going to get you impeached. Oh man, I’m so confused. Oh, where’s Jeff? I miss him so bad. Um, listen, Alan Dershowitz from all accounts based on witness testimony is a scumbag, right? We know that from the Epstein case. Let’s be perfectly clear about that. And even though Dershowitz denies that anything happened, fantastic, maybe it didn’t, you still palled around with this known pedophile for years and years and years and years. What does that say about you, mr Dershowitz? It’s going to be very hard for anybody in that Senate trial to take you seriously one when they know that you’re lying because they have your past statements to back that up. But at this point, this is not even the issue.

Every time you get up there and you start talking and trying to defend the president, do you know what the members of that chamber are going to see? Do you know what the public’s gonna see? They’re going to see the dude that hung around with the pedophile. That’s what I’m going to see. That’s what I see every time I see you on TV. Every time I read an article about you, you’re not Alan Dershowitz anymore. You’re Alan. I kept my underwear on the whole time. Dershowitz, and I’m also good friends with Jeff Epstein. That’s who you are, and you did that to yourself. Whether or not you did anything wrong with any of those underage girls at this point, that’s almost irrelevant. We can deal with that in the trial and and charges against you, whatever. But you stuck with Epstein even after you knew what he did. That’s on you show. You get to wear that tainted little metal around your neck for the rest of your life, and I hope it weighs you down more than anything else in your conscience. But as for your legal argument here, yeah, that’s pure trash. Good luck. Trying to say that a crime isn’t always a crime.