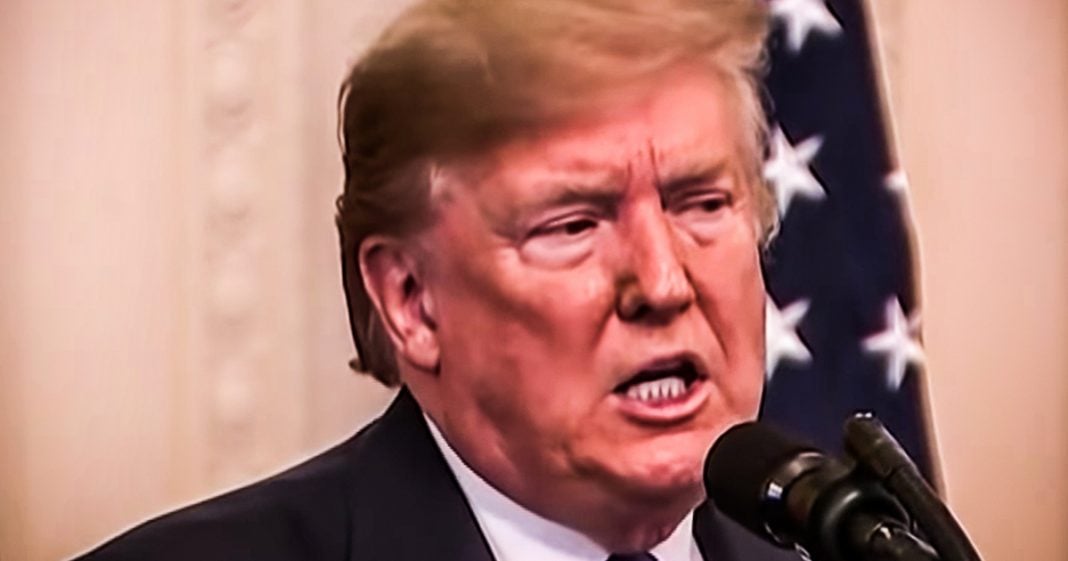 Donald Trump was a part of an HBO documentary, along with former Presidents and other officials, where he was tasked with reading part of the U.S. Constitution out loud. According to a new book, the President couldn’t read the words in the Constitution, and then lashed out at his aides and said it was like reading a foreign language. Ring of Fire’s Farron Cousins discusses this pathetic event from Trump.

More and more revelations keep coming out from the forthcoming book, a very stable genius by Washington post reporters, Phil Rucker and Carol Lennox, and according to the latest revelation that has come out of this book, Donald Trump is incapable of reading the U S constitution out loud. Here’s the story that they detailed in their book. HBO was doing a documentary and they wanted current president, Donald Trump, former presidents, former vice presidents, former members of Congress, current and former judges. All they wanted them to do was each read portions of the us constitution out loud on camera. That was it. They didn’t have to interpret it. They didn’t have to recite it from memory. They were given the piece of paper and said, dude, read. Just read it. Just read it out loud for the camera.

And the book says Donald Trump was incapable of doing it. And in fact, he grew so frustrated because he could not understand the words or pronounce them correctly, that he then lashed out and blamed his staff. It’s your fault. I can’t read. Y’all are being too distracting and I can’t read because there’s noise and people in the room. I guess maybe, and this is just my theory, maybe it’s because there’s no pictures in the constitution, right? I mean maybe if they had like drawn out little stick figures of each amendment and what it does. Maybe if they showed him schoolhouse rock, maybe he would understand it a little better, but instead he whined and said it’s like reading a foreign language and yes, those of us who have read the constitution, those of us who did study it before, they got rid of a civics and most social studies in school, we know that it’s written, you know, in very proper English. Which was common at the time that this was written.

Both. We’re still able to read it. I mean, we didn’t struggle with that part. We still understood what it meant. We didn’t lash out at our fellow ninth graders when we were trying to read it and say, y’all shut up. There’s too many of you. I can’t read. No, we were more mature back then than you are today. And you’re in your seventies we didn’t even have our learner’s permits yet. When we first started doing this. That’s not the only, Donald Trump is a complete moron story. In this new book they went on to add, Mr. Trump barely knew of Pearl Harbor. He wrongly told Indian president Narendra Modi his country did not border China and asked the state department to help him change a law banning Americans from bribing foreign officials for business deals.

I mean, even without the, I can’t read the constitution part of this story, that one little paragraph there. That alone should be enough to warn, this guy’s not good enough to be president. He’s not smart enough. He’s not mentally capable of doing this job. You can’t tell a foreign leader what countries their country does or does not border. I’m pretty sure they know. I mean, how would Donald Trump feel of Kim Jong un came over here and said, yeah, you don’t border Mexico. That’s a, that’s South or America. I don’t know. Of course, if he did say that, Trump would be like, Holy crap. Are you serious? I always thought that was Mexico. Donald Trump was a moron. And if we learn nothing else from this administration, if we don’t take any other lesson from it, how about we just leave it as don’t elect stupid people to be the president of the United States?